Animal attraction has drawn AkzoNobel and Embraer together to develop stunning livery for three of the aircraft maker’s latest line of E2 business jets.

The eye-catching trio of designs – depicting an eagle, a tiger and a shark – was created using aerospace coatings from the company’s Alumigrip and Aerodur ranges. The artwork was applied at Embraer’s facility in São José dos Campos, Brazil, which houses a dedicated AkzoNobel colour mixture centre. 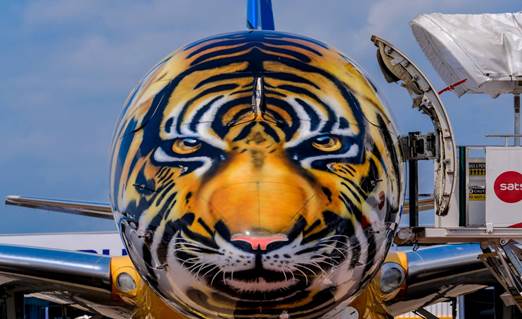 “We were thrilled to see our industry-leading exterior paint system used by the amazing Embraer painters to such brilliant effect,” said John Griffin, Director of AkzoNobel’s Aerospace Coatings business. “We pride ourselves on supplying fit-for-purpose lasting colour performance and protection and the new animal prints on Embraer’s line of E2 business jets are a fantastic example of this expertise.”

As well as supplying products to create the animal designs, the company’s base coat/clear coat system was also applied to the exterior of the three aircraft. The jets are being used to promote Embraer’s global Profit Hunter project, continuing the long-standing relationship between AkzoNobel and the Brazilian aircraft manufacturer.

The Embraer artwork is the latest in a series of striking aircraft designs created using AkzoNobel’s aerospace coatings. Recent examples include a save the coral reefs message for the Mirpuri Foundation which was applied to Hi Fly-owned Airbus A380, and colourful livery developed for Wizz Air’s 100th aircraft.

Meanwhile, AkzoNobel’s Alumigrip aerospace brand is celebrating its 50th anniversary and recently marked the milestone by helping to restore the Berlin Express 410V, a historic B-25 Mitchell bomber used in the filming of the classic 1970 war film, Catch 22.