During the month of June, no less than 2,412,774 passengers flew to or from Brussels Airport. That is 4.3% more than in the same period last year. Thanks to the ever-stronger position of Brussels Airport in the Star Alliance network, the number of transfer passengers in June increased by 3.6% compared to last year. Because of Ramadan, which this year only had a few days in June, and as a result of the first weekend of the summer holidays, the local departure market saw an increase compared to the same month last year (+2.6%). Ethiopian, Etihad, Emirates, United and ANA airlines in particular enjoyed a growth in passengers, thanks to the use of larger aircraft on their long-haul flights. The short-haul airlines with the biggest increase were Brussels Airlines, Ryanair, Air Arabia, Vueling, EasyJet, Finnair, Aeroflot, Iberia and TAROM.

During the first six months of the year, Brussels Airport again welcomed a record number of passengers. In total, 12,283,184 passengers travelled via the airport, which is an increase of 1.8% compared to the first half of last year.

The downward trend in cargo transport continued in June. We saw a considerable decline of 17.0% compared to the same month last year. In June 2018, the airport shipped more than 64,000 tonnes of cargo; this year it handled around 10,000 tonnes less. The decline can be felt in all segments and by all airlines. The trucked cargo underwent the strongest downturn: 26.6% lower than June last year. The reduction in cargo transport is also noticeable in other European airports and is due to continuing economic uncertainty.

When we compare the amount of cargo in the first half of 2019 with the first half of last year, there is a decline of 9.3%. Dedicated cargo flights experienced a strong decline of 16.2% in the first six months of the year. Although a negative trend has been identified in all European airports, Brussels Airport has fared worse than other airports in the vicinity. This can be explained by the general decline in cargo volumes in the European market and the unrest that prevailed in recent months at skeyes air traffic control and the impact this had on cargo flights.

The number of flight movements decreased during the first half of 2019, despite the increase in the number of passengers; the total dropped from 114,112 flight movements to 112,535, a decrease of 1.4%. This is mainly due to the bankruptcy of flybmi and WOW Air and the actions at skeyes. The first six months of 2018 there was an average of 124 passengers per flight, during the first semester of this year the average was 129 (+ 2.4%). 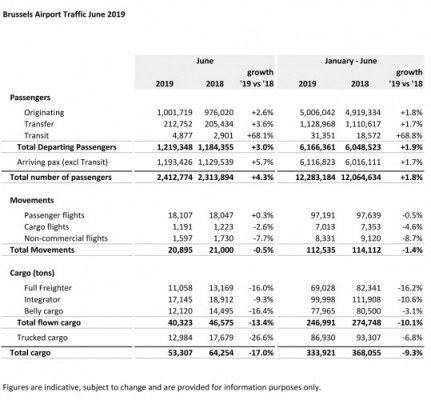