The airline has announced legal action to avoid a climate charge of NOK 400 million (approximately €40 million). Norwegian has now submitted the lawsuit to the district court.

In the summons to the Oslo District Court dated 9 January 2023, it is stated that Norwegian is suing the state at the Ministry of Climate and Environment.

The case concerns decisions on infringement fees under the Climate Quota Act. The District Court confirms that it has received the case.

The Ministry of Climate and Environment decided in December last year that Norwegian must pay an infringement fee of NOK 400 million for failure to deliver climate quotas in 2020.

The company has set aside NOK 15 million for the fee, the quarterly report for the period July-September shows. Norwegian expected that a complaint would be upheld, but instead, the ministry upheld the decision.

The report for last year’s fourth quarter is scheduled to be presented on 16 February.

Norwegian’s comments on the submission on climate quotas:

“We disagree and are very disappointed that we are being imposed a sky-high fee by the Norwegian state while in reality, we followed Norwegian law. There was a clear prerequisite in the reconstruction not to treat claims and creditors differently. Had we nevertheless paid the entire quota obligation, it could have entailed criminal liability, the Norwegian reconstructor was quite clear about that. Regrettably, we now have to go through the legal system to get a final clarification and have now found ourselves obliged to submit a summons, something we would very much like to have done without.

We do not disagree that we had a quota obligation, but it was – like all other demands in the reconstruction – 5 per cent of the amount we owed, not the full amount. This applied to all claims and creditors – including many small private suppliers, who unfortunately faced greater challenges than state actors.

It is also mind-boggling that the Norwegian authorities demand this from us and even impose a penalty fee of NOK 400 million, while the same issue was no problem in the EU country Ireland, where we were in a similar reconstruction. Here, the environmental authorities chose to respect the reconstruction. As is well known, the EU ETS is an EU regime, not a special Norwegian arrangement.” 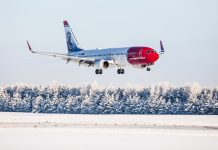 Norwegian had 1.3 million passengers in December (+41%) – Domestic Christmas travels on par with 2019