Ryanair (May 26) announced a full year net profit of €867m, ahead of previous guidance.

“We are pleased to celebrate Ryanair’s 30th Birthday by reporting this 66% increase in net profit which demonstrates the enduring strength of Ryanair’s lowest fare/lowest cost model which has been transformed by the success of our “Always Getting Better” (AGB) customer experience programme.  AGB has attracted millions of new customers to Ryanair.

Highlights of the past year include;

Over the past year we have relentlessly improved our lowest fare/lowest cost model.   We have expanded into primary airports, added business schedules and extended long term low cost growth deals at major bases including London (STN) and Dublin where the Irish Govt has rebooted tourism by abolishing the travel tax.

Our AGB programme is transforming our customer experience, our service, and the way we listen and respond to our customers. We have won substantial traffic and share gains in all markets.  We are now the No.1 or No.2 airline in most EU countries except France and Germany (where we are a rapidly growing No.3).  Since our Year 1 AGB programme has been so successful we have launched our Year 2 programme as part of our strategy to make Ryanair Europe’s most customer friendly, as well as its lowest fare, airline.

This combination of lowest fares and improving customer experience has led to higher load factors and double digit traffic growth.  To facilitate this growth we have ordered 183 B737-800’s for delivery from 2014-2018, and 200 B737 Max 200’s from 2019-2023 (including 100 option aircraft).  These aircraft will deliver at lower US$ rates and much lower Eurobond finance rates which (with 8 extra seats and 18% more efficient engines) will transform our aircraft costs and enable us to lower fares, which underpins our traffic and market share growth, while maintaining and/or growing margins.

Our summer 2015 fleet of 320 aircraft is insufficient to handle the demand for Ryanair’s low fares.  We will lease-in 6 aircraft in the peak period (7 in 2014) to help meet this surging demand. We expect over half of our growth to occur at primary airports such as Brussels, Lisbon, Rome, Athens, Copenhagen, Berlin, Cologne, Dublin and London (STN).  Much of this growth is being stimulated by our Business Plus and Family Extra services which have been key features of our AGB programme and our successful entry/growth at these primary airports.We continue to deliver industry leading punctuality despite the occasional and repeated damage inflicted on our operations by unjustified ATC strikes and airspace closures or by adverse weather in different European regions during the winter schedule as follows:-

Last year we set out a strategy to drive stronger forward bookings, encourage customers to book earlier to avail of lower prices and deliver higher load factors. These higher load factors have helped to reduce unit costs and boosted ancillary sales.  I am pleased that forward bookings, as we enter the S15 peak (June to Sept), are on average 4% ahead of last year, and we expect this will lead to a 2% points rise in load factors from 88% to 90% in FY16 especially as customers enjoy our AGB service improvements.

We celebrate the 30th anniversary of Ryanair first bringing low fares to Europe (8th July 1985) by growing our traffic 11% to 90.6m customers.  This generated revenue growth of 12% which was a pleasing result given we had no new aircraft deliveries in summer 2014. Ancillary revenues grew at a slightly faster rate than traffic so total revenue rose 12% to over €5.6bn.

Unit costs which benefited from lower unhedged fuel prices (10% of volume) fell by 5%. Excluding fuel our unit costs were flat, which was an impressive performance in a year where we made a substantial move to more expensive primary airports without compromising our 25 minute turnarounds.  The fact that we maintained flat unit costs (ex-fuel) while many competitors saw their unit costs rise means that our cost leadership over competitors has widened during the last year.  This bodes well for our growth, especially as we move into airports and routes where our competitors are charging markedly higher fares.  This price advantage has helped Ryanair win substantial market share from competitor airlines in Dublin and London (STN), in particular.

Over the last year we have taken advantage of currency and fuel price weakness where possible, to establish a very favourable hedge position as follows:

This favourable US$ hedging will deliver significant aircraft, maintenance and fuel savings over the next 2 years, even before we engage in further oil hedging during periods of price weakness.

Our rising profits are generating significant free cash flows, which has enabled us to deliver substantial returns to shareholders.  In Feb. 2015 we paid our 3rd special dividend of €520m (€0.37 per share) and then launched our 6th share buyback under which we hope to buy and retire €400m of ordinary shares by the end of August.  This will bring the cash returned to shareholders over the past 8 years to almost €3billion.

Despite these pay-outs we still finished the year with €364m in net cash and a balance sheet rated BBB+ by both S&P and Fitch Ratings, the highest rating of any airline worldwide.  We expect our Eurobond programme, (under which we have raised €1.7bn unsecured at blended rates of 1.50% p.a.) will lower our financing costs, boost profitability and continue to strengthen our balance sheet.

Europe’s airline industry continues to be blighted by over-regulation which frequently places producer monopoly protection above the interest of consumers, or growth in tourism and jobs. Examples such as Europe’s discredited ETS system, the shambles of our single sky project and the failure to prohibit ATC strikes (either by “no strike” legislation, or binding arbitration) allows the ATC Unions to regularly and repeatedly close Europe’s skies.

The UK CMA’s 2013 divestment ruling under which this UK regulator orders one Irish airline to reduce its minority stake in another, solely on the basis of “secret” evidence that no other airline would bid for Aer Lingus while Ryanair held a minority 29.8% shareholding, has now been hopelessly disproven by IAG’s offer.  We have written to the CMA calling on them to reverse this ruling but have been amazed that they (in their provisional decision) have claimed that the IAG bid for Aer Lingus (which they predicted would not happen) is not a “change of circumstances”.  We believe the CMA will be totally discredited if they do not reverse this manifestly erroneous ruling.

In the meantime our approach to the IAG offer remains unchanged.  The Board of Ryanair will consider any offer (should we receive one) from IAG on its merits, if or when it is received.

Ryanair strongly supports the development of additional runway capacity in the London market. We believe that the market should be free to develop 3 new runways, one each at Heathrow, Gatwick and Stansted which is the only long term solution to the capacity crisis in the South East, and which will encourage all 3 airports to deliver additional capacity quickly and cost efficiently.

Thanks to our lowest fares, our growth into primary airports and the remarkable impact of our Year 1 AGB programme, we continue to experience strong demand and forward booking momentum.  Average load factors in the first 4 months of 2015 grew by 10%. While this will slow to 1% or 2% over the peak summer months (due to high p/y comparables) forward bookings are on average 4% ahead of this time last year, as our earlier schedules, lower prices and AGB customer programme, particularly at primary airports attracts millions of new customers to Ryanair.

While our traffic growth this year will be strong, (up 10%), it would be foolish not to expect some irrational pricing response from competitors who cannot compete with our lowest costs and fares.  Ryanair will remain vigorously “load factor active/price passive”.  Therefore, even with the benefit of lower oil, aircraft and financing costs we may suffer periods of fare/yield weakness especially during the H2 winter season. This is why our yield guidance remains cautious at broadly flat in H1 but down 4% to 8% in H2 for a forecast FY yield decline of 2%.  If this decline proves accurate then we believe that lower unit costs in FY16 will still provide a 10% improvement in profits, which should (subject to H2 yields over which we have no visibility) rise to a range of €940m to €970m for the full year to March 2016.” 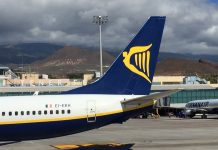