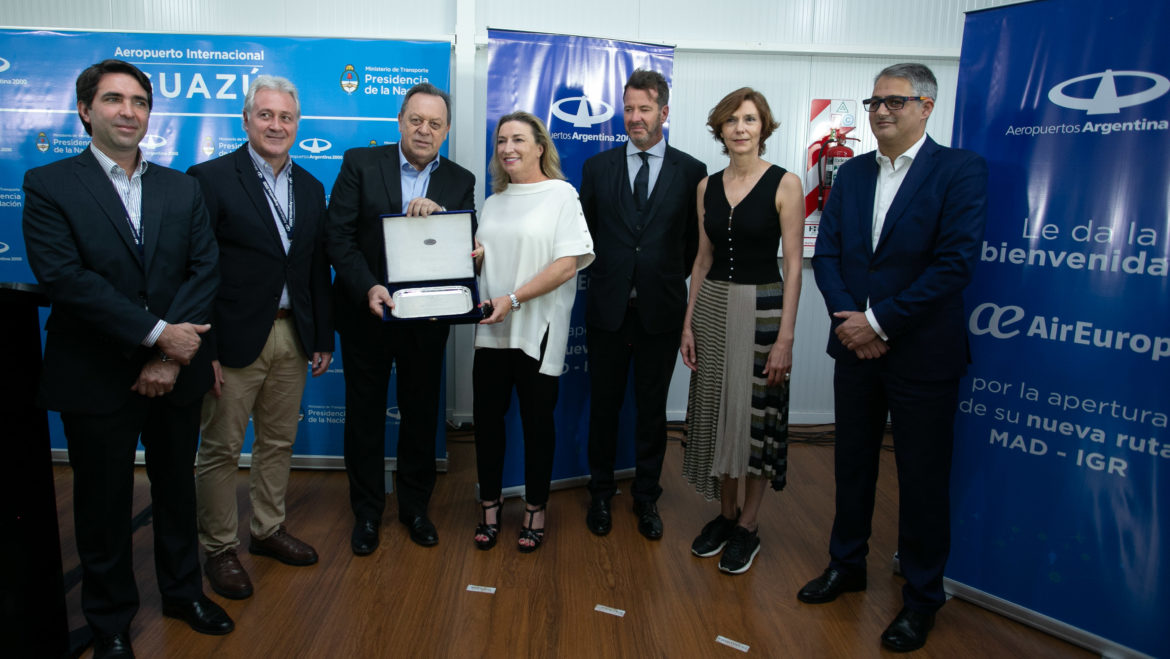 Since the beginning of August, Air Europa has added a new destination in Argentina: Puerto Iguazú. With this destination, the airline will connect twice a week the City of the Falls with Europe, through the airline’s hub in Madrid. In this way, it has become the first European airline that performs regular direct flights to this destination.

Argentine President Mauricio Macri, along with the country’s Tourism Secretary, Gustavo Santos, transport minister Guillermo Dietrich, the governor of the Province of Misiones, Hugo Passalacqua, the CEO of Aeropuertos Argentina 2000, Matías Patanian and the Minister of Tourism of Brazil Marcelo Álvaro Antonio, received at the international airport of Puerto Iguazú the inaugural flight operated by an Airbus 330, with capacity for 299 passengers, of which 24 fly in Business class.

“This step that we are taking, thanks to the commitment form Air Europa, tells us about the value of generating opportunities everywhere in Argentina. Iguazú again has an international flight after five years. And this is, for the first time, one that connects us directly with Europe. This is historic, bringing the Falls just nine hours away from Spain opens a world of possibilities. It’s a big step because it means that many more tourists are coming,” Macri celebrated.

The plane had been celebrated as it left the Madrid airport by the acting Minister of Industry, Commerce and Tourism, Reyes Maroto, who stressed that the Government is working to continue promoting the connectivity of Spain with the whole world. “This improvement favours the diversification of markets and the seasonal adjustment of tourism demand. These are two essential aspects of our Sustainable Tourism Strategy of Spain 2030 that will lay the foundations for a more sustained and sustainable tourism growth model ”. Also, UNWTO Secretary-General Zurab Pololikashvili took part in the farewell ceremony of the inaugural flight.

Among the passengers were the Secretary of State for Tourism of Spain, Isabel Oliver, the Argentine Ambassador in Spain, Federico Ramón Puerta, closely related to the province of Misiones; and the Head of Mission of the Embassy of Paraguay in Spain, Liz Haydée Coronel.

The general director of Air Europa, María José Hidalgo, described to President Macri and other authorities present the satisfaction of Air Europa for flying to Puerto Iguazú and “being able to offer all our clients the possibility of enjoying the majesty of one of the 7 Wonders of the World and discovering the richness and diversity of the province of Misiones, Argentina and the region”.

Hidalgo also highlighted the firm commitment that the Globalia group maintains with the tourism and economic development of Argentina, where we already operate in Buenos Aires and Córdoba, and where it is studying to increase its presence also through its hotel division.

“In 1985, almost 35 years ago, Argentina and Brazil put in the Declaration of Foz de Iguazú the keys to what, a few years later, would be Mercosur, and today Air Europa feels closer than ever to this alliance. We fly to all Mercosur member states and want to help strengthen ties between them,” stated Hidalgo before the Ministers of Tourism and Mercosur authorities invited to the event.

Starting in October this route will be operated by the Dreamliner fleet, the most efficient aircraft on the market and that allows reducing the flight time by 40 minutes. Air Europa connects Madrid with Puerto Iguazú in just over nine hours and on the return trip to Adolfo Suarez Madrid Barajas Airport, it guarantees a perfect and fast connection with the 40 domestic and European destinations where the airline flies.

Air Europa has opted for a triangular operation with Asunción and, with it, it has also achieved another great tourism project by linking the Paraguayan capital with Iguazú and giving a new flight option to discover one of the Seven Natural Wonders of the World and all the wealth that the province of Misiones brings to the world.

Air Europa flies every Friday from Madrid to Iguazú with a technical stop in Asunción and the return that day is direct from Iguazú to the Spanish capital. With regard to the frequency on Mondays, the airline flies from Madrid to Iguazu and return to Madrid through the Paraguayan capital.

The debut of this new route has had a good reception among passengers, registering an average level of occupancy in this first month exceeding 80%, and estimates suggest that it will continue to rise during the coming months.

With Iguazú Air Europa has a total of 23 destinations in the Americas and continue to strengthen its presence on the map as a leading airline between Europe and America.