The Congolese government said on Wednesday that a major air disaster was narrowly avoided above its country. Two aircraft passed each other below the minimum separation zone. Several technical problems with air traffic control occurred. Luckily, good communication between the crews prevented the worse.

The human toll could have been terrible, a Congolese government source said that a disaster was narrowly avoided on Wednesday over the south-eastern part of the Democratic Republic of the Congo (DRC), between a TAP Air Portugal Airbus A330 (*) and en Ethiopian Airlines Boeing 737 (**).

The Ethiopian Airlines aircraft operated a flight between Addis Ababa, Ethiopia and Windhoek, Namibia while the TAP Air Portugal plane operated a flight between Maputo, Mozambique and Lisbon, Portugal. The two routes converged near Lubumbashi, the aircraft were already in close proximity. Air traffic control should have reacted to the situation but could not appropriately respond due to the failure of two antennas (Kalemie and Kamina) and its defective radio communication. 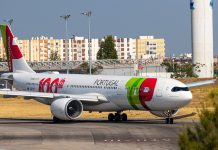