After 2 days of heavy rain, water has flooded Chennai Airport, the water is reaching the under carriages of the aircraft. About 4000 passengers are stranded at the airport. Latest report indicate that the airport will remain closed till at least 6 December. 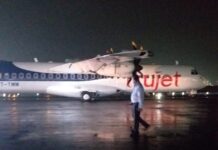