Today, Brussels Airlines’ official Red Devils aircraft Trident brings the Belgian national football team and its delegation to Moscow for the World Cup in Russia. On June 16th the airline also starts operating its fan flights bringing the world’s best fans to Sochi, Moscow and Kaliningrad. The airline will schedule new flights if the team goes through to the eighth-finals.

As the official airline of the Belgian Red Devils, Brussels Airlines flies the national team as well as their fans to Russia. Trident, the official Belgian Red Devils aircraft is bringing the Belgian team and its delegation to Sheremetyevo International Airport in Moscow today. On board of flight SN2018 are the 24 selected players, accompanied by coach Roberto Martinez, the Belgian Football Federation staff and a delegation of Belgian media. Trident is scheduled to take off at 12.00 pm and to arrive in Moscow 3 hours later. Each player has its own personalized chair, with their name on the headrest cover.

In consultation with the Red Devils’ cook and nutritionist, a special menu has been prepared by LSG Group, the airline’s caterer. A cocktail with prawns is followed by the main course including chicken coconut with rice and vegetables or a salmon and spinach pasta. A rice tart follows as a dessert. Three types of dairy, apples and bananas complete the players’ menu. Besides a special menu on the plane, the team also takes ‘speculaaspasta’ with them, a typical Belgian caramelised biscuit spread. Trident also flies a lot of cargo to Russia for the team, including 90 footballs, 1300 football shirts and 150 pairs of football shoes.

Besides the national team and its delegation, Brussels Airlines also flies over 4,500 fans to Russia for the three games in the group stage. The first fan flight leaves in Brussels on June 16th and will bring the Red Devils fans to Sochi for the team’s first game against Panama. In total 23 extra fan flights are foreseen for the first three games in Sochi, Moscow and Kaliningrad. Options include same-day return packages, a package to stay on location for a few days, as well as open return tickets for fans wanting to stay in Russia until the national team returns. The airline will organize extra fan flights for the next stages as long as the Red Devils are in the World Cup, meaning that Brussels Airlines will schedule new flights to Russia if the team goes through to the eighth-finals. 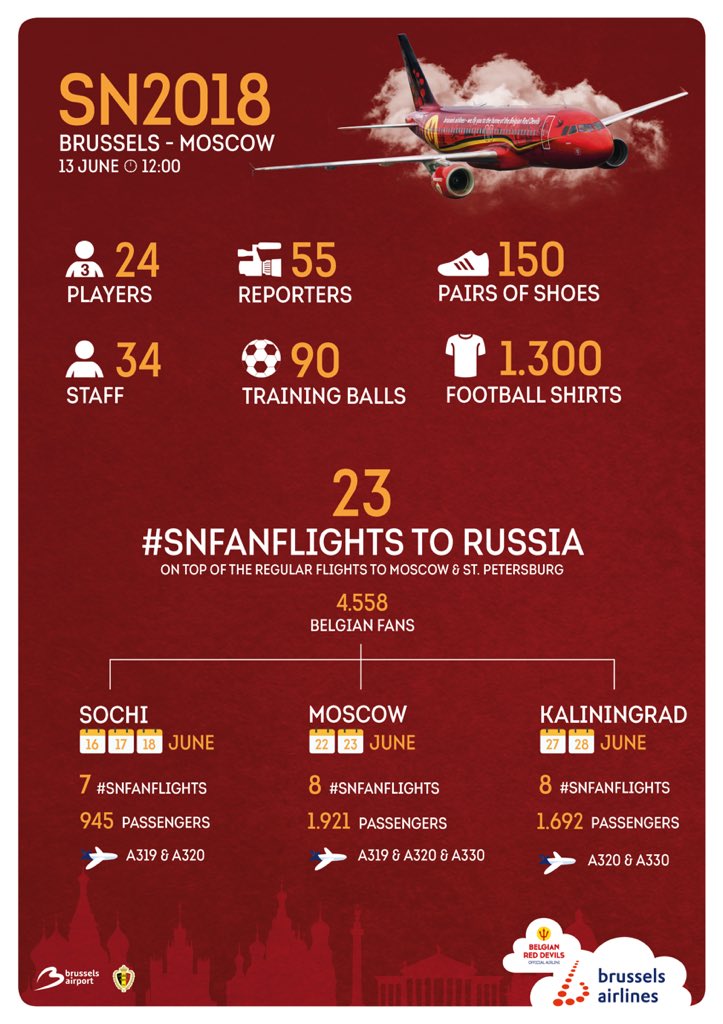 On the fan flights, the crew wears special Red Devils themed scarves and ties, inspired by the official player’s shirt. They will prepare the fans for the game and teach them some basic Russian vocabulary. A special football-themed safety video, starring the players themselves, will air on board the entire A320 fleet during the World Cup and will be the permanent new safety video for Trident. Next to the special fan flights, fans will also fly to Russia on Brussels Airlines’ regular scheduled flights to Saint-Petersburg and Moscow.

Since 2014, Brussels Airlines is the official airline of the Belgian Red Devils. The team relies on Brussels Airlines for all its official travels by plane. Not just any plane, but the official Belgian Red Devils aircraft ‘Trident’, a devilish red Airbus A320 that the airline had repainted as a tribute to the national team. On the inside, the aircraft is decorated with pictures of the most iconic moments in Belgian football history. Also for the previous World Cup in Brazil and the European Championship in France, Brussels Airlines flew the national team and its fans across the globe.

Brussels Airlines denies rumours that it is bankrupt

Brussels Airlines denies rumours that it is bankrupt

Belgian couple arrested for selling airline tickets to The Moon