Symbol of the Battle of Britain in 1940, a demilitarised and glittering Spitfire took off on Monday for a long journey in some 30 countries. Pilots Steve Brooks and Matt Jones want to pay tribute to those who designed, built and piloted the Spitfire.

Two British airmen took off from the south of England on Monday to attempt the first round-the-world journey aboard a legendary hunter and symbol of the Battle of Britain in 1940, the Spitfire.

For the purpose of the adventure, the Silver Spitfire, which served during the Second World War, was demilitarised, stripped of its cannons and paint, revealing the silvery and shiny metal that covers it.

“We hope to make people aware of the beauty and aesthetics of the Spitfire. It is the most majestic aircraft that exists, “said Steve Brooks, one of the pilots.

The 76-year-old plane took off from Goodwood Airfield, near the southern coast of England, for a four-month, 43,500-km journey in some 30 countries. It will be piloted in turn by Steve Brooks, 58, and Matt Jones, 45, flying school bosses.

For its first leg, the plane headed for Scotland and then it will cross the Atlantic Ocean through the Faroe Islands, Reykjavik, Greenland and remote areas of northern Canada.

A crucial role against Nazi Germany

Agile interceptors, the Spitfires played a crucial role in the Battle of Britain, while the United Kingdom fought the threat of an invasion of Nazi Germany. For Steve Brooks, “the Spitfire represents the freedom of humanity“.

With this world tour, Steve Brooks and Matt Jones intend to pay tribute to those who have designed, built and piloted the Spitfire, and invite those who see her to cherish freedom. Of the approximately 20,000 aircraft built, less than 250 remain, of which only 50 are flying, mostly based in the United Kingdom.

“The Silver Spitfire over the Golden Gate”

The expedition, funded largely by a Swiss watch manufacturer, will comprise a total of approximately 90 stages across North America, Asia, the Middle East and Europe.

The plane will fly over some of the most iconic sites in the world: the Grand Canyon (USA), Mount Fuji (Japan), and some of the seven wonders of the world in Egypt and Greece. It could also fly over the Great Wall of China and land in the “pink city” of Jaipur, India.

“We will see so many people and so many countries. I hope it will be a success, “said Matt Jones before the start. “Seeing the Silver Spitfire over the Golden Gate, the Statue of Liberty or the Pyramids of Giza is going to be fantastic,” said Steve Brooks.

The Spitfire has “a real soul”

All the more, according to the pilot, flying on a Spitfire is an experience like no other. “It’s the most incredible sensation. Once you’re inside, you’re part of it, he said. It’s like driving a vintage car. He has a real soul.”

The aircraft is powered by a powerful 27-litre V12 Rolls-Royce Merlin engine with its “spectacular” sound: “You have this whirring engine that resonates throughout your body,” said Steve Brooks, the first pilot to fly from one pole to another by helicopter.

But taking control of a Spitfire also involves a challenge: “It’s good old technology” that requires driving “feeling“, he explained. The team should return to Goodwood on December 8th.

The Spitfire (Mk.IX), a single-seater registered MJ271, was built in 1943 by British manufacturer Vickers Supermarine in Castle Bromwich (central England). It participated in 51 combat missions, escorted bombers, and dived targets on the French coast. 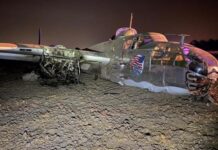 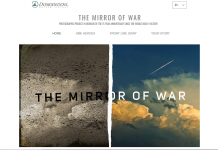