Ryanair pilots based in Belgium confirm that they will carry out new strike action on Saturday 23 July and Sunday 24 July. They feel “despised” and are still waiting for a salary increase, explained CNE/ACV trade unionist Didier Lebbe.

Ryanair announced yesterday that it has reached an agreement with pilot unions in France and Spain to avoid the strike planned for 23 and 24 July. However, their Belgian colleagues will not change their minds and they will strike on these two days.

Few details have percolated from the French and Spanish agreements. It seems that it would allow the pilots to gradually regain, in 5 years, their pre-Covid salaries, which had been cut by about 20%.

The same proposal was also made in Belgium but the pilots refused it. Lebbe does not understand how French and Spanish pilots could be satisfied with such a proposal when Ryanair traffic has increased to 115% of pre-Covid levels. Pilots are thus asked to work more with lower wages.

The management of the airline is known for being tough during negotiations. In Belgium, it threatened to leave the territory if the strikes were not stopped. “They’ve been doing this blackmail to us for years,” explains Didier Lebbe, who doesn’t believe it for a moment: “Ryanair has built up a huge market in Belgium that it would leave in the hands of competitors by leaving the country“.

According to Didier Lebbe, this Thursday, the airline has already cancelled on 23 and 24 July all flights departing from Brussels and 49 flights from Charleroi. However, Ryanair plans to use independent pilots to replace those who are on strike.

Apart from the fact that this is a breach of Belgian law, the CNE/ACV unionist assures us that if the Irish company persists and nevertheless recruits other pilots, the union will then encourage the cabin crew to also go on strike.

To date, Ryanair did not express its intention to return to the negotiating table, but it issued the following statement: 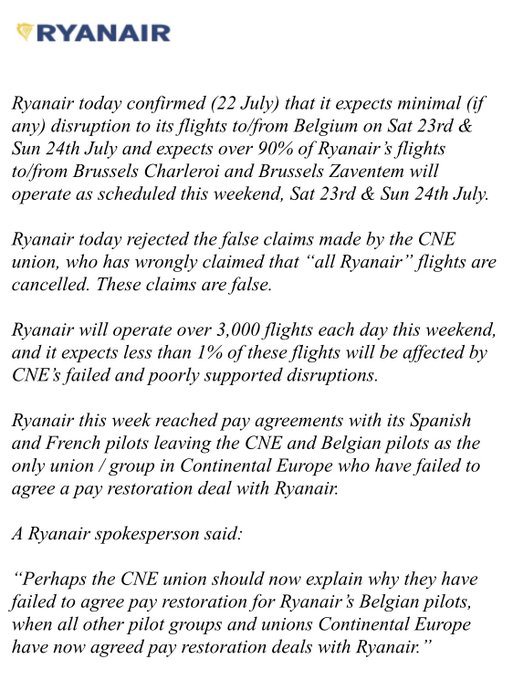