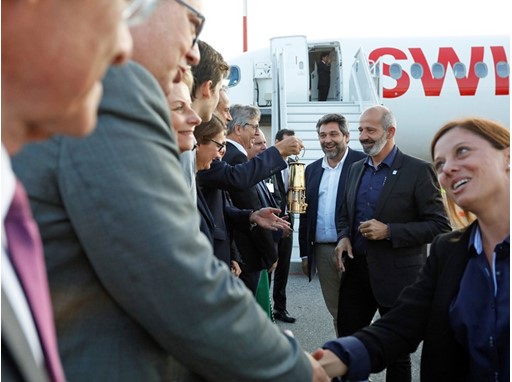 The city of Lausanne, Switzerland will host the Winter Youth Olympic Games in January 2020. SWISS had the privilege of transporting the Olympic Flame from Athens to Geneva.
Swiss International Air Lines (SWISS) carried the Olympic Flame for Lausanne 2020 on its flight from Athens to Geneva, following the Flame’s lighting ceremony at the Olympic  Stadium in Athens on 17 September 2019. The Olympic Flame has thus returned to Switzerland for the first time since the Winter Olympics were held in St. Moritz in 1948.
The Olympic Flame was accompanied on SWISS flight LX1823 from Athens to Geneva by Virginie Faivre, the President of the Lausanne 2020 Organising Committee, and members of the 2020 Winter Youth Olympic Games delegation. Also on board was Lorenzo Stoll, SWISS’s Head of Western Switzerland. “As The Airline of Switzerland,” he said, “we are proud to support this exceptional event, and to serve as the first carrier of the Olympic Flame on its journey from Greece to Lausanne.”
The Olympic Flame’s arrival on Swiss soil was formally marked with an airside ceremony which was attended by representatives from the Republic and Canton of Geneva and from the Canton of Vaud. From 21 September onwards, the Flame will be taken on a three and a half month Torch Relay through all of Switzerland’s 26 cantons before arriving in Lausanne for the Games’ opening ceremony on the evening of 9 January 2020.

The Flame’s air journey from Greece to Switzerland required extensive organisation because the Flame must traditionally remain lit at all times. The flame itself was enclosed in a lantern, but various authorisations were still required, and good coordination was vital. SWISS’s Dangerous Goods unit gathered all the necessary information, such as the type of liquid used to keep the flame lit aloft and the type of gas which was being transported in the aircraft’s hold to keep it alight within the torch upon its arrival in Switzerland. The entire operation was also approved by the Swiss Federal Office of Civil Aviation. Swiss WorldCargo was then enlisted to ensure the loading of all the items required, and the crew of the flight were also fully briefed about their unusual cargo.

The Youth Olympic Games enable young people aged 15 to 18 to compete internationally at the highest level in a range of Olympic disciplines, combining performance, culture and education in a genuine sporting festival. SWISS is proud to be the official carrier of the Olympic Flame and to support  this event, which encourages its participants to adopt and live by sport’s positive values – self-esteem, respect for others, care for the environment, friendship among peoples and cultures, performance and commitment – and to serve as ambassadors thereof all over the world.