This summer, AMS-DUB was flown by Aer Lingus, 5xdaily, in codeshare with KLM.
Competition is good for the consumer - may the best win !
IF IT AIN'T BOEING, I'M NOT GOING.
Top

Am I correct to assume that it is twice daily to BRU and once daily to CRL?
André
ex Sabena #26567
Top

Ryanair in summer 2016 season will be introducing new service from Pisa, including the addition of 4 routes to Berlin Schoenefeld (3 weekly), Catania (1 daily), Sofia (2 weekly), Corfu (2 weekly).

Ryanair is to add two new routes from Birmingham to Madrid and Verona for summer 2016, in addition to the previously announced introductions of Vilnius and Corfu. Ryanair is also to increase frequencies on six existing routes from Birmingham: Alicante, Barcelona, Dublin, Malaga, Malta and Palma
IF IT AIN'T BOEING, I'M NOT GOING.
Top

Ryanair’s fleet is set to swell from 320 Boeing 737s this year to around 360 in 2016, as the Irish budget carrier begins its aircraft-delivery ramp up.

“This is the first year of significant aircraft deliveries, running at 40-50 per year,” Ryanair CEO Michael O’Leary told journalists at a London press briefing on Dec. 1.

Ryanair has also been approached by the Israeli authorities, encouraging the budget carrier to increase its links to the country, but this is not high up on our list of priorities,” said O’Leary, noting that Ryanair is instead focusing on its expansion in Germany, Poland, Central Europe, Italy and Spain.

New Sky interior and thin seats in the new Boeing 737-800s of Ryanair (and the ugly yellow reduced to a minimum): 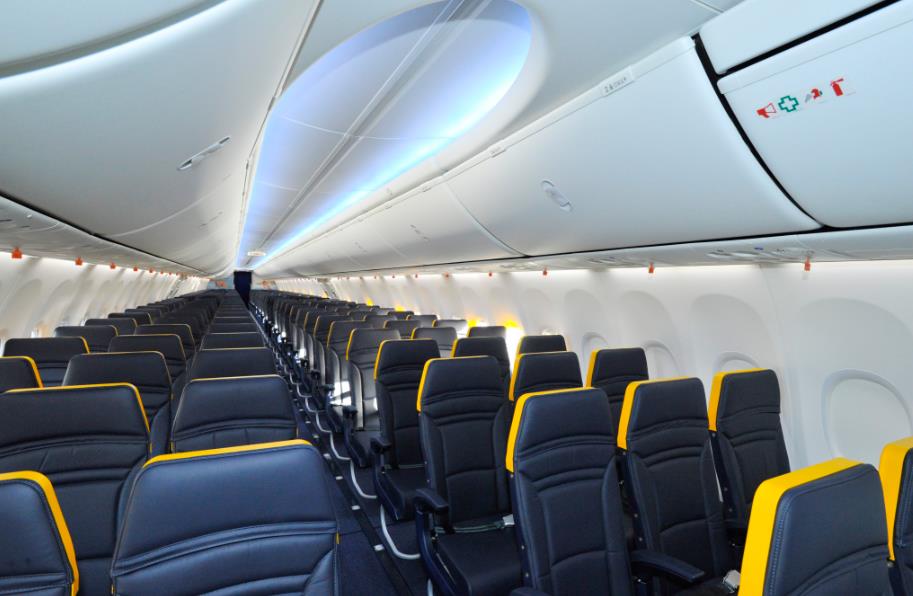 sn26567 wrote:and the ugly yellow reduced to a minimum

It's a nice improvement I think we all agree on that, but why keeping this ugly yellow!
Top

Looks less cheap when you look towards the back, but what do you see when seated and look to the front?
The pictures give the impression the (top of the) back of the seats are still from yellow plastic!
I agree with the comments above: why do they absolutely want to have their interiors look like you are on some urban transportation system??? Surely the colour of the plastic doesn't constitute a price difference, does it, so aren't they a bit too eager to give a cheap impression?
Top

Passengers on board a Ryanair flight have praised the pilot after he was forced to reset the wing flaps before the plane landed. The captain of the 12pm FR6674 flight from Knock to Liverpool was forced to circle the UK city while he reset the wing flaps. “The captain was fairly relaxed – it came across the intercom, I thought it was a drill I had my earphones on,” Damian Heslin said, who was sitting at an emergency exit.

For the first time, Ryanair published separate figures for its two Belgian bases in 2015:

7,4M pax in total... does anybody have an idea about SN's December figures?

I was thinking the same: how can they claim to have 25% of the Brussels market when BRU and CRL haven't published their figures yet?
André
ex Sabena #26567
Top

7,4M pax in total... does anybody have an idea about SN's December figures?

Anyway, according to De Tijd,
Ryanair failed to live up to their claim of being the biggest airline in Belgium in 2015:
http://www.tijd.be/ondernemen/luchtvaar ... 1452096216

If confirmed indeed, that's the second year in a row ryanair publically claims to be the biggest in Belgium for about 2/3rd of the year, then goes quiet on that claim as the end of the year nears and they start feeling they may actually be beaten and indeed do not live up to their own bragging in the end.

I can fully understand them having misread Brussels Airlines' expansion over 2014, but to make the same mistake two times in a row? Wonder if they will once again pretend to be the biggest during their early 2016 PR events in Belgium? Wouldn't be very smart, IMHO.
Better to underpromise and overdeliver, than vv.


sn26567 wrote:how can they claim to have 25% of the Brussels market when BRU and CRL haven't published their figures yet?

I think it's not an exact figure, but rather just an estimate, based on assumed total volumes at the Belgian airports. It will be roughly correct, give or take a percentage point, but of course it combines 2 markets and even more bases, as not all passengers are flown on planes based at the 2 Belgian airports.
By the same account, others should also be allowed to add their Belgian passenger counts from group airlines together, IMHO. Why should British Airways, Iberia, Aer Lingus and Vueling be counted seperately, for instance? Or if Brussels is taken over in full by the Lufthansa group, they could add all the Lufthansa, Swiss, Austrian, Germanwings traffic to their headcount too then to compare on a par.

I suppose BRU and Brussels Airlines will come out with their figures in a couple of days, and then we can settle this discussion for once and for all... or for 2015 at least, because it will start all over again in 2016, showing how irrelevant it really is: nobody is in this business to simply be the biggest in the end.
Top

This is not the same intérior than the photo shows above, above the yellow is still very present
Top

CRL is not Brussels, but okay... PR Talk.

The two pictures without the yellow seem to be impressions, while the first looks like a real picture.

the seats look very familiar to me. But now we don't hear anyone complaining how uncomfortable they are...

Also I was surprised how small the aisle is. But I guess that is the picture...
Top
Post Reply
340 posts