The International Air Transport Association (IATA) released data for global air freight markets showing a 3.3% increase in cargo volumes (freight tonne kilometers or FTKs) in April 2015 compared to April in the previous year. While there is growth compared to the same month in 2014, there has been no actual growth in aggregated global cargo volumes since late last year.

At a regional level, only the Asia-Pacific and Middle Eastern airlines reported growth in April. North American carriers reported essentially flat demand, while Europe, Latin America and Africa all reported declines when compared to 2014. April data also revealed a slowdown from the growth for the first quarter of 2015, which averaged 5.3%, in line with a recent weakening in world trade growth. Despite a cyclical pick-up in the global economy, acceleration in trade and air freight demand is unlikely in the near term as business confidence and export orders are flat or declining.

“After a volatile start to 2015, the market is settling down, and it is clear that momentum in air freight growth is being lost. First there is the structural challenge of world trade no longer expanding at a faster rate than domestic production. Layered on top of that trend we now see a weakening of economic indicators in the crucial air cargo markets of Asia-Pacific and Europe,” said Tony Tyler, IATA’s Director General and CEO.

“These factors point toward a need to kick-start trade by reversing protectionist trade measures. Implementing the Bali Trade Facilitation Agreement would be a good start, as well as commitments to help facilitate trade in emerging markets,” said Tyler.

Also of note was the significant capacity increase of 5.5% in April 2015, driving the load factor down to its lowest for the past 12 months.

Asia-Pacific carriers reported demand growth of 4.5% in April compared to April 2014, below a capacity expansion of 7.0%. Current trade volumes for emerging Asia markets are down 10%, and the region has been affected by a slowdown in exports to Europe.

European carriers saw demand decline by 0.3% in April, compared to a year ago while capacity grew by 5.0%. Recent improvements in European business confidence have yet to be reflected in air freight volumes. A firming-up of oil prices and the Euro has meant that positive momentum from the European Central Bank stimulus has faltered.

North American airlines reported demand growth of 0.1% year-on-year while capacity was cut by 1.6%. A disappointing economic performance in the first quarter is expected to improve in the coming months, with the likely impact of falling oil prices and the end of the West Coast port strikes.

Middle Eastern carriers saw demand grow by 14.1%, on the back of increased trade within the region, along with network and capacity expansion. Capacity grew 18.5%.

Latin American airlines reported a fall of 6.8% in demand, while capacity grew by 7.0%. Month-on-month results for carriers in the region indicate that recent declines may have come to an end. The hope is that general increases in regional trade activity start to be reflected in stronger air freight demand.

African airlines experienced a 0.2% decline in demand and a 2.2% decrease in capacity. The region still appears to be affected by the under-performance of the Nigerian and South African economies.

“After a brief optimistic period, the global outlook for cargo shows that once again the business is stagnating. But the good news is that with digital processes, new standards for pharmaceutical handling, and a focus on reducing end-to-end shipment times the air cargo industry is well-placed to stage a recovery. On 7-9 June the world’s aviation leaders will gather in Miami, Florida, for the 71st IATA Annual General Meeting (AGM) and World Air Transport Summit. The Cargo Strategies session will explore how the industry is going to make real progress on these initiatives,” said Tyler.

Other topics under discussion at the AGM include:

Attendance at the AGM is by invitation only. Accredited media are invited to attend, but must be pre-registered. 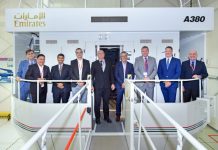