On 13 April, the world’s largest aeroplane took to the skies for the very first time from Mojave Air and Space Port in California. The Stratolaunch (registered N351SL) flew for 2.5 hours and reached a top speed of 189 mph (304 km/h) before safely landing again.

The Stratolaunch is designed and constructed by Scaled Composites LLC, a company founded by Microsoft co-founder Paul Allen, and will be used as a platform to launch space vehicles. It has a wingspan of 117 metres and a length of 72 metres. Its range reaches 2,200 kilometres.

Its six Pratt & Whitney PW4056 turbofan engines and its avionics have been sourced from two Boeing 747-400s. With its dual fuselage, the Stratolaunch weighs 226 tonnes and can carry multiple launch vehicles, a payload of up to 250 tonnes.

Check out these video highlights from the historic first flight: 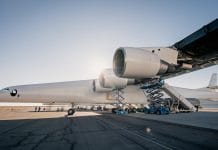