Home Miscellaneous Solar Impulse Solar Impulse 1, Solvay’s Flying Lab is now at home in Paris!
Facebook
Twitter
Email
WhatsApp
Linkedin
ReddIt
Pinterest
Viber
As Solar Impulse 2 gets underway on its around the world trip, and draws the attention of the global media, its older sibling, Solar Impulse 1 (SI1), is also receiving its fair share of well-deserved attention at the moment. I am so proud and extremely happy that this prototype aircraft, which has clocked-up more than 480 hours flying time and completed 77 flights, is now finally accessible for everyone to see up close, as it takes up its temporary residence at Cité des Sciences et de l’Industrie in Paris.
Since the very beginning of the Solar Impulse project, back in 2004, I was certain that SI1 would have a very special and important future ahead of it, not just in the sky, but as we see today in Paris, also on the ground where it is set to inspire millions of people. For me, it’s a dream come true.
Through my guidance and recommendation, Solvay decided to purchase SI1 to give this remarkable plane, which really was our “Flying Lab” at the time, a second life, one that will help to further strengthen our global message about clean technology and its future role in all our lives.
Some people ask me why we decided to loan the aircraft to Cité des Sciences et de l’Industrie, and not to a traditional museum? Museums are about the past, or things that do not live anymore. Furthermore, it would not be right to put SI1 in an aircraft museum, because it is so much more than an aircraft. The SI project is about the delivering the message of clean technology and innovation, and the plane is actually just the messenger. So, Cité des Sciences et de l’Industrie is the perfect location because it too is about promoting science technology and industry, and this is the exact story of Solar Impulse 1. It is the perfect match.

At its new home in Paris, the story of Solar Impulse can reach around 2m people each year, and more specifically the young people, who are the future. The aircraft will be located at the Cité des Sciences et de l’Industrie for two years, which means that we will be able to share our message and our experience and enthusiasm about the future possibilities of clean technology, with over 6m people, which is incredible.

We have tried to make the display as interactive and informative as possible. Children can use our flight simulator to “fly” the SI1, and visitors learn all about the technology on board through various educational displays around the aircraft. For sure, it will be hard for any visitor to miss our display in the main hall given its impressive stature and we are very hopeful of generating a wider understanding and appreciation of the future of clean technologies and the role we can all play in this.

Solar Impulse One is open to the public from March 31, with the official opening ceremony taking place on May 19, 2015, which coincides with the start of the Climate & Business Summit in Paris. 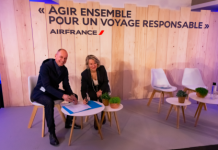