Female empowerment is a hotter topic than ever, and International Women’s Day (8 March) is set to be more inspiring than ever before.

And to celebrate, we’re shouting about women’s achievements in the aviation industry, from well-known heroes such as Amelia Earhart to lesser-known legends who deserve more kudos, like Amy Johnson, the Brit who flew solo from the UK to Australia.

Air travel has come a long way since the pioneering days of the Wright Brothers, and despite aviation being considered a male-dominated field, women have made significant contributions to that progress throughout the decades.

The first woman to hold a pilot’s licence was a Frenchwoman in 1910, and a dozen other countries followed the French lead by allowing women to fly by the end of the First World War. But in many places the role of women in aviation remained restricted for a long time, for a host of sexist reasons. And until the early 1970s women were often restricted to serving in support fields, such as flight simulation training, air traffic control and as flight attendants.

There’s still a way to go before we reach gender parity, but, thankfully, things are improving all the time, with present-day pioneers breaking barriers and helping to #PressforProgress.

To celebrate the women who broke the mould and fought gender stereotypes, Netflights.com has collated the top 10 most inspiring women in aviation.

In the early days of aviation, Raymonde de Laroche became the first woman in the world to receive a pilot’s licence in 1910, paving the way for other women to follow in her footsteps and take to the skies.

Energetic, unconventional and adventurous, Lilian Bland became the first woman in the world to design, build and pilot her own plane. She playfully named it Mayfly (it may fly, it may not fly).

Not only was Hilda Hewlett the first British woman to receive a pilot’s licence, she also established the first flying school in the UK and co-founded a successful aircraft manufacturing business that contributed significantly to the UK’s effort in the First World War.

Only one year after obtaining her pilot’s licence, Amy Johnson became the first female pilot to fly solo from Britain to Australia. Her longest solo flight before that had been from London to Hull, her hometown.

In 1953, Jacqueline Cochran became the first woman in the world to break the sound barrier in an F-86 Sabre. She also persuaded the US government to use women pilots in non-combat missions during the Second World War.

It was not until the early 1970s that the world would see the first woman pilot a commercial airline, when, in 1973, Emily Howell Warner was hired by Frontier Airlines.

After spending most of her life pursuing a career in advertising, Wang Zheng, also known as Julie Wang, decided to take up flying. She obtained her private pilot’s certificate in 2011 and became the first Asian woman to circumnavigate the planet by aeroplane in 2016.

Despite these amazing achievements, figures show that there is still a way to go for women in aviation. Today only 3% of pilots are women worldwide; in the UK the figure is 6%.

Paul Hopkinson, Marketing Director from Netflights said: “Celebrating International Women’s Day is essential not only to highlight women’s achievements, but also to raise awareness. We want people to both be inspired and to remember that there’s still work to be done when it comes to women’s rights in the workplace around the world.”

“Celebrating ‘Women with Altitude’ is the perfect way to mark International Women’s Day, as this highlights the amazing contributions women have made to what is considered a male-dominated field.” 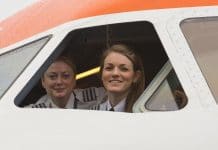 Women with altitude: Five times equality won in aviation during 2018