An Air Canada Rouge Boeing 767 (C-FMWP) that was arriving at its gate at Toronto Pearson Airport collided with a LOT Polish Airlines Boeing 787 (SP-LRC) that was parked at the adjacent gate.

No one was injured when two aeroplanes clipped wings at Toronto’s Pearson International Airport on Saturday night, according to the Greater Toronto Airports Authority.

Air Canada Flight AC1713 made contact with a LOT Polish Airlines plane, LOT046, at the gate of Terminal 1 at about 10:18 p.m., Natalie Moncur, spokesperson for the GTAA, said Sunday.

Peter Fitzpatrick, a spokesperson for Air Canada, said in an email there were 286 passengers on board the Air Canada flight at the time of the collision.

The inbound Air Canada Rouge plane, a Boeing 767-300, had arrived from Punta Cana in the Dominican Republic and was parking when it collided with the LOT aircraft, he said.

“The matter is under investigation,” he said on Sunday.

In an email on Sunday, LOT Polish Airlines said its Boeing 787 Dreamliner was at the gate with passengers boarding the aircraft when its winglet was hit by the winglet of the Air Canada Rouge 767 while it was trying to park in a neighbouring bay. 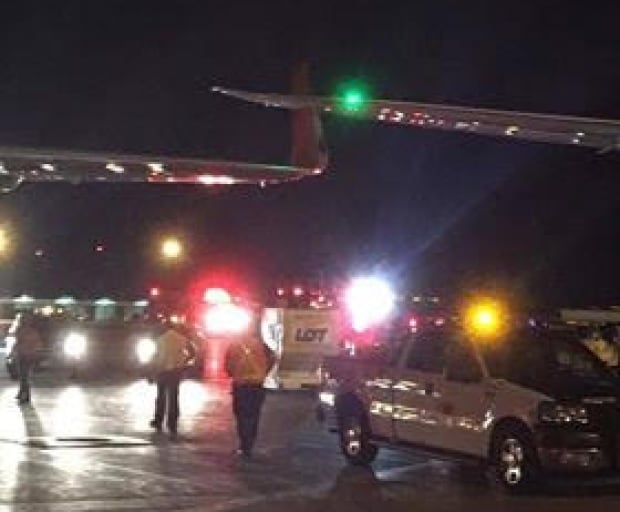 LOT Polish Airlines says the entire wing of the aircraft that was hit will have to be inspected.

It said no passengers on board its aircraft were affected or injured.

The damaged winglet will have to be replaced and the entire wing will have to be inspected, it said. The flight from Toronto to Warsaw was cancelled. Passengers on the plane were accommodated in a hotel and rebooked to other flights, it said.

“We are investigating this incident with airport authorities and our colleagues from Air Canada,” it said.

Chris Krepski, spokesperson for the Transportation Safety Board of Canada, based in Gatineau, Que., said damage to the wings of both aircraft was extensive.

The board was notified about the collision involving the two aeroplanes and is gathering information, but has not sent an investigator to the airport, he said. A formal TSB investigation has not yet been launched.

“Based on the information we received, it was the Air Canada aircraft that contacted the wing of the LOT Polish Airlines aircraft while taxiing to the gate. The LOT aircraft at the time was parked and preparing for departure,” he said.

“We have been notified and we are following up with both operators as well as Greater Toronto Airports Authority, but we are not deploying to the airport right now. We are going to assess what our next steps will be.”

Moncur said the collision occurred on what is known as the “apron” in the gate area, where the planes park to allow passengers to board and disembark.

She said the GTAA’s Fire and Emergency Services, Peel Regional Police, Mississauga Fire and Toronto Paramedic Services all responded to the collision.

“Any time an incident occurs, we, of course, follow protocol, and that includes calling the Transportation Safety Board, which is what happened last night,” Moncur said.

Prem Sternik, a Winnipeg resident, says his aunt, Wiesia Brzostek, was on the LOT aircraft when its wing was clipped. The plane was in the process of pre-boarding when it was hit.

The aircraft was evacuated after the accident, he said.

Sternik said he was very concerned and frustrated because his aunt, who came to Canada from Poland to visit his family for a month, does not speak English and uses a wheelchair. She was preparing to go from Toronto to Warsaw to return home after taking a flight from Winnipeg.

He said more than 60 passengers were bused to Walper Hotel in Kitchener, Ont., and told there was little hotel space in Toronto this weekend. According to Sternik, they were not given vouchers for the hotel or for food.

“We don’t know what is going on. All information has been secondhand. We are getting bits and pieces of information right now. There should be an emergency contact. It’s puzzling to me,” he said in a telephone interview from Winnipeg.

“It’s hard to sit on pins and needles on the long weekend.”

Sternik said he believes his aunt has been rebooked on a flight that is supposed to leave tonight at 10:05 p.m. ET.

“It is extremely shocking that Air Canada and LOT Airlines have not contacted our family [about] this situation up to now, as to what has happened and where our aunt is at this moment,” he said. “We are extremely surprised to find all information through the help of other passengers that spoke Polish and could help my aunt.”

LOT did not comment on the claims that it has not provided information or vouchers for the passengers who were displaced by the accident.

Passengers were boarding the Polish airliner during the incident. Shortly thereafter, LOT flight LO46 to Warsaw was cancelled and passengers were bused to hotels.