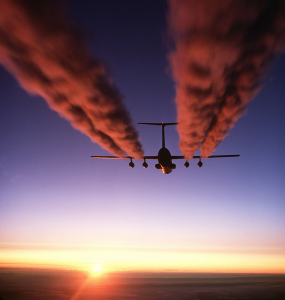 Imagine you are the government’s Minister for Transport: the economy is prospering, global oil prices are falling, and airlines are ordering hundreds of new airliners and investing in infrastructure in order to expand their flight networks. Tourism and the service industry are booming, and the public appetite for cheap air travel appears insatiable. But your government also is committed to radically reducing the greenhouse gas emissions, such as carbon dioxide, that cause climate change.

It’s an obligation that has huge implications for all sectors of the economy – none more so than the energy-intense transport sector, and particularly aviation. Can technological advances and engineering offer a means to have your cake and eat it? To cut emissions while not interfering with the economic and employment boom generated by the industry – not to mention how popular cheap air travel is with voters.

While the airline industry is quick to reassure that technical solutions, such as improved materials, engines and biofuels, and market-based measures can provide a fix, our research has found these to be examples of “technology myths”.

Most Ministers for Transport would take the low-risk option of the promise of technocratic and market approaches to the problem tomorrow rather than take more direct action today. Industry promises and reassurances offer time to address the attractive opportunities provided by greater mobility and economic growth. Both are key government objectives.

The reality of the effects of rising aviation industry emissions on climate change has been known for decades, yet the industry and its emissions has continued to grow without constraint. Aviation emissions proved too contentious to be dealt with under the Kyoto Protocol, and the European Union’s efforts to bring international, non-European aviation emissions into the EU Emissions Trading Scheme were blocked by the industry.

The myth of zero-emission flight

Published in the journal Transportation Research Part D, our study sheds some light on the “promise” of technical solutions through a 20-year examination of how they were reported in the media and the extent to which they were subsequently implemented. We found that new airline industry technology, including airframe, engine and alternative fuel breakthroughs, have been consistently presented by the industry as essential to building an ecologically sustainable aviation industry.

But the discussion of them continues to give credence to the myth of zero-emission flight – shielding the industry from closer scrutiny of its efforts to meet emission targets and improve sustainability practices.

The clearest examples of such myths are solar and electric flight. Last summer, the Solar Impulse 2 solar-powered aircraft attempted to fly around the world. This single-seat aircraft required enough solar cells to cover a wingspan the size of a 500-seater Boeing 747 airliner to generate enough power even to carry its single pilot aloft. Even those involved in the project admit it will never replace current air transportation.

Electric flight is equally problematic, as it requires a 15-fold increase in the energy density of lithium batteries (power supplied by weight of battery) in order for commercial flight to become possible. While some industry experts claim that this is not beyond the realm of possibility, it’s unlikely to arrive before 2035, and even then a very long aircraft development and fleet replacement process would follow. All this is far too late to avoid dangerous climate change.

Biofuels are no panacea

The more viable option of replacing aviation kerosene with biofuels also comes with caveats. The most efficient biofuels reduce CO2 emissions by up to 90%, but are inefficient to store and create land use competition with agriculture for crops. Others are more space efficient, but unable to deliver net energy (the energy content of the produced kerosene is lower then the energy required to turn the feedstock into kerosene).

The cost of biofuels is also underestimated. For example, a recent Independent Transport Commission (ITC) report to the UK government recommended that carbon emissions need not be a show-stopper for further development of Heathrow and Gatwick airports. The report’s claim that biofuels will be commercially viable is reached by comparing the cost of ready-to-use aviation kerosene with the cost of existing biofuel feed stocks such as wood pulp and palm oil. But this is not a useful comparison because no aircraft will ever be able to leave the runway on pure palm oil alone, but must run a blend of fuels.

At the same time, the report states that CO2 emissions are likely to be mitigated by a 1.6% annual improvement in fuel efficiency and operations – conveniently ignoring the fact that the volume of air traffic continues to grow at 5% each year.

The fact remains that aviation, a steadily growing and polluting industry, remains outside major climate agreements such as those agreed at the Paris COP21 conference last year. The myth of sustainable aviation remains intact, and the industry ducks regulation once more.

This article was originally published on The Conversation. Read the original article.

Greenpeace Belgium : No billion euros bailout for airlines without conditions

Passengers can get a COVID-19 antibody test at Moscow Domodedovo