Aviation24.be and RateOne.be were invited to visit a nice restoration project initiated by AELR, the association of friends of the Air & Space Museum, led by its President Philippe Doppagne. For those who wonder what the initials stand for: musée de l’Air et de l’Espace – Lucht- en Ruimtevaartmuseum.

The aim of AELR is to contribute to the development of the Air and Space section of the Royal Army Museum, in cooperation with the War Heritage Institute. This goal is achieved through three main functions:

The idea of the C-119 project is to make an area available for the visiting of a completely restored Fairchild C-119 “Flying Boxcar”. This transport aircraft was a staple of the Belgian Air Force between 1952 and 1973 (when it was replaced by the Lockheed C-130). It was used for the transport of troops, especially paratroops, and heavy equipment, and for humanitarian missions. It participated in the evacuation of Belgians from the Congo after its independence in 1960.

The Belgian Air Force had up to 40 C-119s. After their retirement in 1973, they were all flown to Coxyde Air Base to be dismantled, and only two of them remain: one was transported in separate parts to Melsbroek in the Dakota museum of the 15 Wing, and the other one to the Air Hall of the Royal Army Museum in Brussels.

However, these aircraft were in a poor condition. The interior may currently not be visited for safety and preservation reasons, but our team was exceptionally authorised to enter the aircraft. The AELR project, with the support of the War Heritage Institute, consists of the installation of a special space enabling a visit of the aircraft under comfortable conditions, with an area for the exhibition of photographs, models and special items related to the C-119.

All this work is done by volunteers with a long experience in the restoration of ancient aircraft, with the help of specialised companies for more technical tasks in order to achieve a solution that safeguards the work in the long term.

We had a visit of the aircraft under the guidance of AELR President Philippe Doppagne and Project leader, retired Aviation Colonel Lionel Gabriel. Here are a few pictures, either provided from the Museum or made by myself. 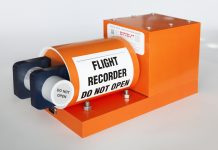 Orange is the new black: the history of the ‘black box’