On 16 April 1913, the First Squadron was born with the creation of the l’Aviation Militaire Belge – Compagnie des Aviateurs (Belgian Military Aviation – Aviators Company). In 1917, the squadron chose the Scottish Thistle as its emblem. It took part in World War I and won many victories, notably with Hanriot HD1. In total, throughout its history, this squadron operated 24 different types of aircraft with the thistle emblem. These include the Fokker DVII, Nieuport 29CI, Fairey Firefly, Hawker Hurricane MKI, Spitfire MK XIV, Republic F-84 E and J, Mirage V BA and BD and of course the Lockheed Martin F-16 since 1989.

The F-16 FA-57 was presented with its colours on Friday 13 May. It is based on the yellow and black colours of the squadron’s long line of “Blackbird” aircraft. This series started in 1987 with the Mirage V BA-33.

Of course, the Scottish tartan and thistle are represented all over the aircraft to remind the Scottish heritage. On the right side of the front landing gear door, there is a representation of the first Commander of the squadron, André De Meulemeester, who chose the emblem in 1917, 105 years ago.

SNACKO, one of the young pilots of the squadron, tells us: “We used the ‘ONE’ logo, created a few years ago, for the right side of the tail and the lines were reworked. On top of that, we put the ‘STINGERS RULE’.  The tartan is present everywhere.  You can see it very clearly on the thin belly but also on the top of the tail. A black and white diamond has also been added to the top of the tail on both sides. This is a little nod to the fact that a few years ago the F-16s belonged to a specific squadron and had their own mechanics, etc. Each F-16 had a little specificity to differentiate them on the line. We also added a black stripe and a thin yellow line at the cockpit level, which goes back towards the tail. The aim was to have, I would say, a vintage look that reminds us of the old tails.

In addition to that, there is also a representation of the first CO of the squadron on the door of the nose gear, with a reminder of the 105 years of the squadron.

The designer’s photo is on the left side, behind the trailing edge of the wings.” 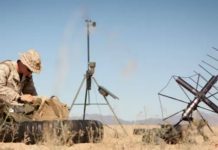