The 48th rotation of detachments contributing to NATO’s Baltic Air Policing mission is imminent. From September 2018, the Belgian Air Force will take the lead over the mission at Šiauliai, Lithuania, while the German Air Force will augment out of Ämari, Estonia.

This is the seventh time, the Belgian Air Force will deploy to the NATO mission with F-16 fighter jets, Airmen and equipment. The detachment will come from both fighter bases at Florennes and Kleine Brogel and stay until the end of the year. In March 2004, Belgium was the first nation to be responsible for safeguarding the airspace of the three Baltic States since their accession to NATO.

The rotation will replace detachments of the Portuguese, Spanish and French Air Forces which have been conducting the mission since May 2018. NATO Air Policing is a 24/7 collective peacetime mission overseen by Allied Air Command and tactically controlled by two Combined Air Operations Centres at Uedem, Germany and Torrejon, Spain. For all Allies that don’t have their own Air Policing capability, like the three Baltic States, agreements exist to maintain a standard of airspace security ensuring the integrity and protection of Allies’ airspace. 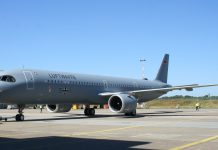