The Belgian Air Force has announced its new F-16 Solo Display pilot for the next air show season.

Senior captain aviator Stephan ”Vador” Darte will be the new F-16 Solo Display pilot for the next air show season. Vador is a skilled F-16 pilot and has been flying the Belgian Air Force F-16 for many years now. 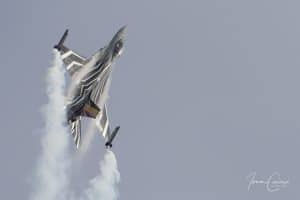 Vador will be taking over from Senior captain aviator Tom “Gizmo” De Moortel who was the Belgian Air Force F-16 Solo Display pilot from 2015 until 2017.

Next to being a skilled F-16 pilot, Vador is also a very talented aviation photographer who dares to pick up his camera while being in a 90 degrees vertical dive. He has been published in numerous brochures and magazines of the Belgian Air Force. 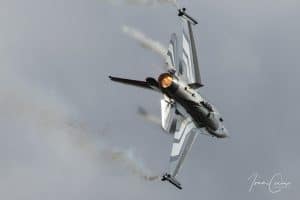 The Belgian Air Force has also announced that this season’s solo display F-16 will have a new livery, nicknamed ‘Dark Falcon’. More info as well as the final livery itself will be unveiled in the coming weeks and months.

Few days ago, Vador already started his training for the upcoming air show season . We wish Vador and his crew all the best and look forward to the 2018 season of the Belgian Air Force F-16 Solo Display team.