Last week, the Belgian government decided to lease two Dassault Falcon 7X VIP aircraft. The so-called “white fleet” of the Belgian Air Component consists of passenger aircraft that are used for VIP flights assuring the flights for e.g. the Monarchy of Belgium, ministers and members of European institutions.

The dry-lease agreement – a contract worth €124 million – will guarantee two Falcon 7X’s during a period of 12 years, based on the agreement with Hi Fly, the Portuguese ACMI specialist that is leasing an Airbus A321 (CS-TRJ) to the Belgian Air Component.

Minister of Defence Didier Reynders confirmed the deal to Belgian press agency Belga and added that the new agreement is a cost saving measure of €40 million over 12 years.

The remaining Embraer’s (two ERJ 135 and two ERJ 145) will be phased out and sold for around €15 million. According to Reynders, the Dassault Falcon 20E is ready for a museum or the scrapyard. 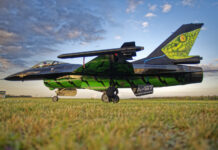