The Press Conference took place at Florennes Air Force Base, with a panel of distinguished visitors, including the Governor of the Province of Namur and elected officials.

The press conference kicked off with the foreword of Major General Aviator Frederik Vansina, Commander of the Air Component reviewing the Capability Briefing of the F-35 & MQ-9B Sky Guardian.

Starting with the F-35, General Vansina highlighted once more the Air Combat Capability Successor Programme with Belgium’s transition roadmap from 54 F-16s to 34 F-35s. New aircraft will be stationed at Florennes & Kleine Brogel AFB.

General Vansina then moved to the RPAS Capability with the C4ISR / RPAS Successor Programme. As Belgium has ordered the General Atomic SkyGuardian MQ-9B, 4 drones & 2 ground stations are to be stationed at Florennes AFB.

General Vansina: “Earliest delivery MQ-9B is targeted for the first quarter in 2023. We have a Partnership with Great Britain regarding training & best practices. We are enforcing the PED(*) “Processing, Exploitation & Dissemination”.

(*) The goal of a PED group is to process collected data, create intelligence products from those results, and disseminate the products to users.

A word from Major General Frédéric Goetynck, Chief Infrastructure
“New Cap@Florennes” Regarding the new requirements and plans for the infrastructure, the current infrastructure is outdated (built in the 1950-1960s) and not meeting the standard for operating modern combat aircraft. Current shelters are also not fit for the job (doors, start-up operations etc). Furthermore, security is not up to date to the ‘current standards’. We would like to aim at a more efficient, centralised exploitation, better use of energy and vehicles. All of this while securing the perimeters and continuing supporting the F-16’s operations.

Belgian Defence is relying on the “Design, Build and Maintain” (DBM) approach for the new constructions. Design plus Build budget is estimated for 300 million EUR (Florennes and Kleine Brogel). Maintain phase is estimated at 3,7 million EUR per year as of 2027. Call for candidates was in August 2020, Candidates proposals are due by September 2020, Offers are expected in February 2021 for government seal of approval in 2021 last quarter. 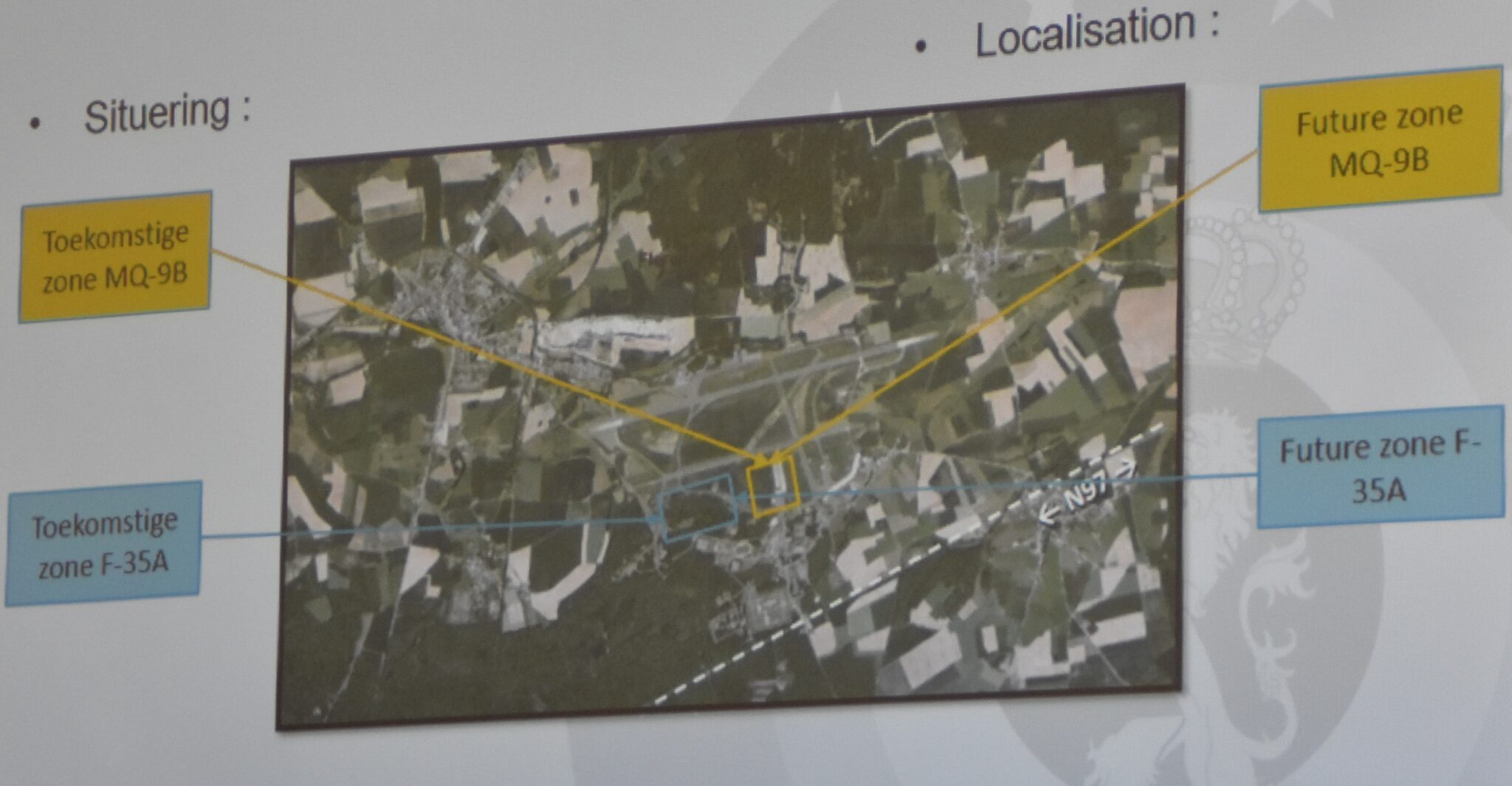 In regards to the delivery of the MQ-9B, estimated in the first quarter of 2023 with 2 remote Pilot Aircraft (RPA) & 2 ground control systems, then in 2024 first quarter with 2 remote Pilot Aircraft (RPA) we estimated a new construction of 7,500 sq metres (3D) and 10,000 sq metres (2D) for parking, taxiway. Call to candidates was issued in May 2020. Potential candidates were invited in June 2020, selection of Candidates was done in August 2020. Disposal of candidates is planned for September 2020 with expected government approval in the last quarter of 2021.

Projection of MQ-9B perimeter, based on the current hangar and new administrative building to build.

It’s a cheerful Minister that took the stage, congratulating his colleague Minister David Clarinval on the efficient budget delivery and with a sweet memory glimpse on his F-16 experience with his homonym Base Commander Colonel Goffin.

“It is my pleasure to come onsite and announce a piece of information that might have slipped from Grand Public radar but the 300 million EUR budget was approved this summer. It is an important milestone for the country and the regions where the bases are located as many returns are planned and expected. Whether in terms of acquisitions, VAT, social laws or stimulated employment, returns are estimated up to 90% of the investments”.

Excerpt from David Clarinval Minister of Budget speech: “I am very pleased to be here in Florennes to bring to you about all these files that have been unblocked from a budget point of view.

One of them is a dossier that has gone a bit “under the radar” with the Memoranda of Understanding” (MoU) agreement, which has important implications for Belgian industries in the context of these public contracts. We wanted to go further than usual. There is now an established framework for this type of reconciliation. Companies such as SABCA, ASCO or SONACA are investing heavily in these new technologies in the field of aeronautical. It is good to have a return but it is also important to have a transfer of technology. This is what the signature of this MOU is about. We remain ambitious and Belgium offers real opportunities in terms of cutting-edge technologies. All these investments are helping to stimulate employment. We’ve seen that Defence is committed, but so are other players. Belgium will be directly involved in the manufacture of the horizontal tail of the F-35s.

This will pave the way for innovation regarding our cutting-edge companies. It will strengthen employment in our country through the aeronautics and defence industries, but also with research institutions. We already have a collaboration between Solvay and Lockheed Martin for innovation projects of Belgian universities in the aeronautics sector. There are also five projects that are part of the strengthening of the defence, industry and technology clusters in Belgium. The purchase of these new planes has positive consequences for Defence, industry, employment and research, this is the political message that we wanted to convey today, together with Philippe Goffin”.

After a short group picture, due to COVID measures, all guests were invited outside where ‘traditional Questions & Answers’ was held.

We reached out to Colonel Goffin, Florennes AFB Base Commander in order to get the impact and his insights regarding Florennes Air Base (EBFS): “The choice that was made for the Florennes AFB for the F-35s to build the buildings in a currently unoccupied area. So the current F-16 infrastructure will not be impacted. Where there could be implications is that the area is close to a taxiway. It will be necessary to build while keeping the taxiway operational. It’s the same for the MQ-9B hangars.

Sometimes these are small details, e.g. the contractor should not come with 40m cranes because we are staying on an airbase.

For the MQ-9B, the work will start in 2022 and with the proximity of the parallel runway (08R/26L) and the need to cross a taxiway, there will be coordination with the contractors. There will be a whole series of constraints in the requests in the specifications to oblige them to take into account the fact that they will be working on an operational airbase. There will need to be interaction, especially if they have to use high lifts or other equipment“.

We also wanted to know the current situation regarding the Florennes Air Base Personnel. “What’s in it” for them, what will it bring? Colonel Goffin, Florennes AFB Base Commander: “For the future, we are trying to keep the staff up to date. The first ones to leave for the F-35 will go to the USA for a while. We are talking about more than two years there. They will then come back to train new pilots in Belgium. Things are starting to become clearer and we have a good idea of the timings. At the same time, we will still have people who will have to stay to operate on the F-16 until the end.

For the technicians, they will first go to Eglin AFB for six months and then another part to Luke AFB. In total, they will be away for one year. Thereafter the training, including theoretical training, will be done in Belgium. We already have some motivated technicians who are improving their English in preparation for the F-35.

The maintenance itself will also evolve.

It is important to know that at the moment on the F-16 we are working by position, armament, avionics, engine and airframe. In the future there will remain two specialities: on the one hand the armaments – avionics and on the other hand the airframe – engine. The crew chief will also do maintenance tasks. We will have more flexibility. The concept of maintenance on the F-35 is also different because we are moving quickly to the industrial side. For example, for the F-16, every 300 hours the aircraft goes through a maintenance phase with a retirement period of X months. For the F-35, maintenance is more continuous with a whole series of small tasks and equipment exchanges that go into maintenance. For major maintenance, we will have technicians from the industry who will come to work on the base. We have already started this type of maintenance in partnership with the civil world, among others for the engines with BEC ( Belgian Engine Centre based in Herstal ).

The question will also arise as to when we will fly F-16s in Florennes. Are we going to keep the two bases operational on F-16s until 2028 or will there be a time lag? The question remains open for the moment and it’s still a little early to answer it.

For the specifications of the new infrastructures, there will be a screening of the Americans. Observers will be there when the concrete is poured, for example. The programme requires this type of standard procedure in Belgium but also in the other countries which operating this aircraft. There will be audits during the construction. The aim is to have accreditation at the end of the process so that we can welcome the F-35 here“.