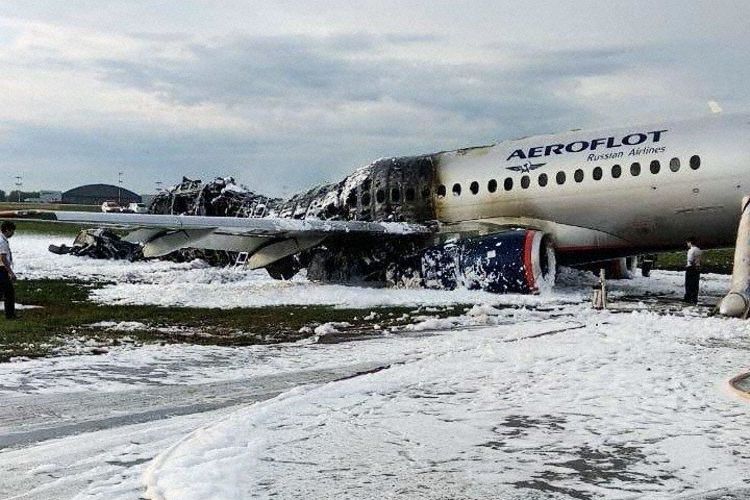 More and more questions are being raised on the airworthiness of the Sukhoi Superjet 100-95B type. On 5 May, an Aeroflot SSJ (RA-89098) crashed during its landing phase at Moscow Sheremetyevo Airport. The aircraft was operating a flight between Moscow and Murmansk, but was forced to return to its airport of departure. According to captain Denis Evdokimov, the aircraft’s electronics failed after a lightning strike. The Superjet immediately caught fire after a very rough landing, 41 passengers didn’t survive the crash.

Russian business daily newspaper Vedomosti talked to former pilots about the possible causes of this tragedy.

Vasily Kryuk, General Director of Yamal Airlines (the largest operator of SSJ100 in Russia after Aeroflot), a pilot with 40 years of experience:

“It will be possible to determine the cause of the disaster only after decoding the black boxes. Losing electronics after a lightning strike is a possibility – in 2018, there were about 30 cases of lightning strikes on airplanes in Russia alone – but all flights ended successfully.

The reason for the failure of the electronics after this lightning strike can only be a poor-quality assembly of the aircraft and problems with the static dischargers (*). Our experience shows that the build quality of the SSJ100 leaves much to be desired.

It’s a miracle that the pilots were able to land: a fully fueled and thus heavy aircraft, without the necessary flight instruments. The actions of the pilots deserve respect.“

(*) Note from editor: Static dischargers will not function if they are not properly bonded to the aircraft. There must be a conductive path from all parts of the airplane to the dischargers, otherwise they will be useless. Access panels, doors, cowls, navigation lights, antenna mounting hardware, control surfaces, etc., can create static noise if they cannot discharge through the static wick. (source wikipedia static discharger)

Igor Deldyuzhov, president of the Sheremetyevo trade union of flight personnel, former pilot of the Tu-134, Boeing 737 and Boeing 767:

“It is too early to draw conclusions about the causes of the disaster, the investigation has just begun. But a lightning strike on a serviceable aircraft should not cause radio communications or electronics to fail. Also, the investigation will evaluate the correctness of the pilots’ actions: the plane is equipped with a weather dome, why did it fly into a thunderstorm? Why was it decided not to burn fuel first but land with full tanks? Excess landing weight and manually controlling the aircraft are, most likely, the reasons for a hard landing.“

“One of the reasons of the crash could well be the discharge of lightning onto the aircraft, which are protected from discharge, but the power of the lightning could be so great that the protection doesn’t work resulting in a failure of the electronics. As a result, the flaps couldn’t be lowered resulting in a high-speed approach (standard landing speed is 250-260 km/h, in this case the speed exceeded 300 km/h).

Pilots are instructed to avoid thunderstorms and – in my opinion – fuel needed to be burned first to avoid an overweight landing.

There also lies an issue with pilots training. The SSJ100 can be operated on autopilot as manually. The latter, however, has been banned by Aeroflot’s management. Manually flying the aircraft is practiced only once every six months in simulators, resulting in a lost skill of manually flying the aircraft. In this case, the SSJ100 had to be put in manual mode, moreover with an excess of the landing weight, which reduces handling.“

Aeroflot has bought 10 Boeing 777-300ER from an Irish lessor