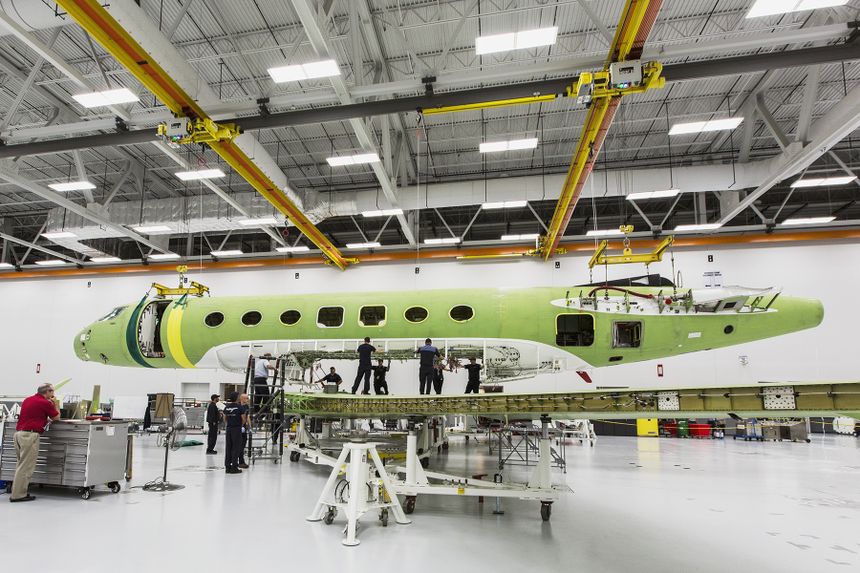 As production continues for the G600, the Gulfstream G500 flight-test program also achieved several milestones to include receiving the program’s first Type Inspection Authorization (TIA) from the Federal Aviation Administration (FAA). The FAA issued the TIA for inlet compatibility and allowed Gulfstream to perform this testing for certification credit.

“Achieving these milestones speaks to the maturity of both programs and demonstrates our commitment to ensuring these aircraft deliver the performance, safety and reliability we promised,” said Mark Burns, president, Gulfstream. “The wing-to-fuselage join is a significant step in manufacturing the first G600 and reflects our continued steady progress toward first flight. The official launch of certification testing on the G500 highlights the efforts being made to achieve certification in 2017. Together, these accomplishments attest to why Gulfstream is the leader in business aviation.”

T2 recently completed inlet compatibility testing at Eglin Air Force Base in Florida. The test exposed the G500’s Pratt and Whitney Canada PW814GA engines to high wind conditions by using a large blower, which artificially generates winds of up to 45 mph (72 km/h). The aircraft was positioned at various angles to demonstrate the engine functions properly from idle to takeoff power during crosswind and tailwind conditions.  With the completion of inlet compatibility testing, T2 returned to flight loads validation and aircraft systems testing.

T3 will begin testing wing anti-ice systems after just recently completing cold soak testing. As part of that testing, the aircraft made its first flight outside the United States, reaching into Canadian air space to complete the cold soak evaluation. T3 is focused on testing the all-new Symmetry Flight Deck™, the ice-protection system and various other mechanical systems.

The fifth test aircraft, P1, is at the Savannah Completions center, where it is receiving an outfitted interior and will be used to test the cabin elements.

Extensive work also continues in the state-of-the-art G500 and G600 lab facilities, where more than 47,200 hours of testing having been completed. In February, the G600 iron bird made its first flight, setting in motion the testing and validation required for the G600’s actual first flight. The iron bird allows engineers to test the flight control and mechanical systems, including landing gear, brakes and hydraulics.

The cabins for the G500 and G600 are optimized for safety, comfort and reliability. The aircraft can carry up to 19 passengers, have forward and aft lavatories and include a full-size galley that can be located in either the forward or aft portion of the aircraft. The G500 and G600 feature an industry-leading cabin altitude of 4,850 ft/1,578 m at FL510 and 100 percent fresh air that circulates every two minutes.