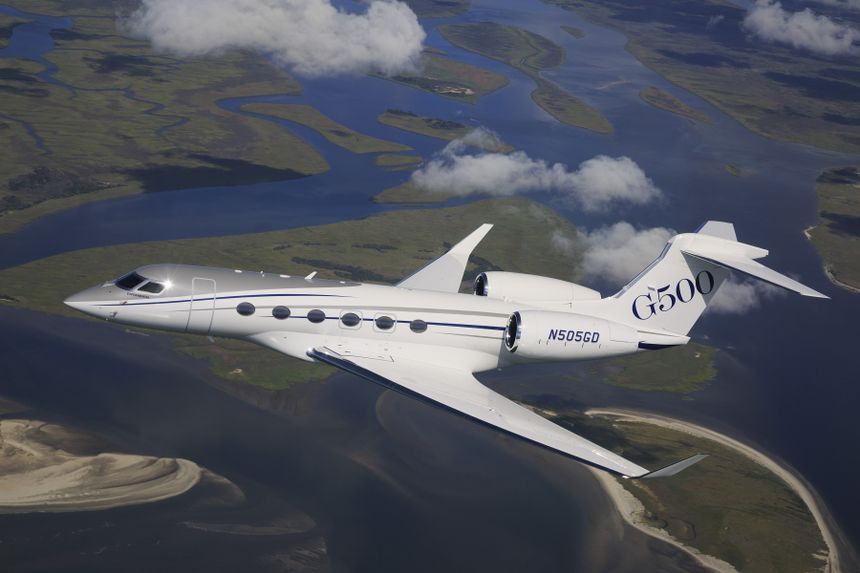 Gulfstream Aerospace Corp. today announced the first fully outfitted Gulfstream G500 test aircraft made its European debut by setting a city-pair record from Savannah to Paris. The aircraft flew between the two cities in 7 hours and 40 minutes, covering the 3,788-nautical-mile/7,015-kilometer distance at an average speed of Mach 0.90.

In commemoration of the 90th anniversary of Charles Lindbergh’s first nonstop solo trans-Atlantic flight on May 21, 1927, and to mark another milestone in the G500 flight-test program, the same G500 also achieved a flyover city-pair record between New York and Paris. The aircraft flew 3,166 nm/5,863 km at Mach 0.90, resulting in a 6-hour and 21-minute flight.

Pending approval by the U.S. National Aeronautic Association, the records will be sent to the Fédération Aéronautique Internationale in Switzerland for recognition as world records.

“The G500 and its larger sibling, the Gulfstream G600, are perfectly suited for European customers thanks to their best-in-class speeds and cabin comforts,” said Scott Neal, senior vice president, Worldwide Sales, Gulfstream. “These are aircraft customers helped design, so we want them to see the results of their feedback and to showcase our commitment to delivering cutting-edge technology, outstanding performance and remarkable cabin design. The fact that the G500 is mature enough to complete trans-Atlantic city-pair records while simultaneously testing the outfitted cabin says a great deal about this aircraft’s capabilities.”

Gulfstream’s practice of embedding innovation with design is inherent in the G500. While the G500 was in the early stages of development, Gulfstream built an integration test facility to evaluate the flight deck and cabin interior in real-time flight scenarios on the ground. As a result, advancements made in the lab have been implemented on the outfitted test aircraft, giving the cabin thousands of hours of testing long before its first flight.

In flight, the outfitted G500 will be used to assess the complete passenger experience for fit, flexibility, durability and comfort. As with all Gulfstream aircraft, each G500 cabin will be tailored to an individual customer’s design preferences and mission requirements. Seating up to 19 passengers in three living areas, the G500 has forward and aft lavatories, a galley that can be situated forward or aft and 14 signature Gulfstream panoramic windows. As previously announced, the G500 is on track to enter service later this year.