The first aircraft of the new generation of the Embraer E-Jets family was presented in Sao Jose dos Campos.

A brief ceremony: A video about the assembly of the aircraft; a speech by Paulo Cesar de Souza, president of Embraer Commercial Aviation, noting that today February 25 is a historic day and how proud they are in Embraer; and an aerial parade of various models manufactured by Embraer, including the new KC-390 military transport flying in formation with the Smoke Squadron. They have preceded the ceremonial departure of the first Embraer E190-E2 from the assembly hangar in the manufacturing factory in Sao Jose dos Campos, north of Sao Paulo.

After that, de Souza, with Federico Curado, Embraer President and other senior executives of the company have poured champagne on the radome of the aircraft.

The E-Jet family was launched by Embraer during the show at Le Bourget 1999 and the first aircraft completed its first flight on February 19, 2002 .

Today, 14 years after that flight, Embraer has delivered more than 1,200 aeroplanes of the four models that form the family.

In 2003, again at the Paris Air Show, Embraer announced the launch of a modernized and improved version of this family under the name E2, which is the version presented now.

There are three models of the E2, unlike the first generation which had 4 models. The E170 version, the smallest one, disappears. In the other three models, Embraer has introduced a new engine, the Pratt & Whitney PW1000G, new winglets, similar to the racked wingtips of the Boeing B-777, a lighter structure, refurbished passenger cabins to accommodate more seats in the case of E175 (one row) and E195 (three extra rows). In the E2-E190 and E195-E2, Embraer has decided to adopt a wing with an additional 1.4 meters wingspan to improve flight characteristics.

The first flight of this airplane presented now is scheduled for the second half of 2016 and certification and entry into service by 2018. 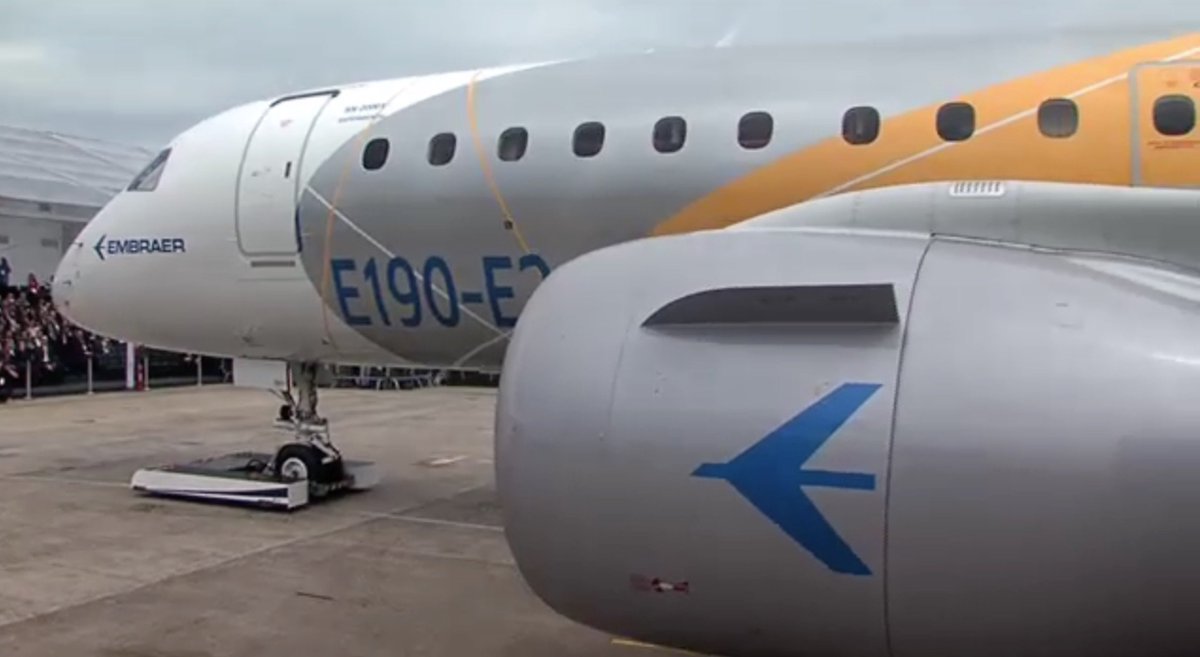