Rescue services are still looking for the two pilots.

The U.S. NTSB has launched an onsite investigation.

The Convair approached Toledo from the south, crashed on the property of Bubba's Truck Repair close to the Ohio Turnpike Motorway, approx. 500m short of runway 25 setting off multiple fires.https://t.co/1lNW8YCuyx pic.twitter.com/2NGyGoeTPT

The NTSB is investigating the crash Wednesday of a Convair 440 in Toledo, Ohio. 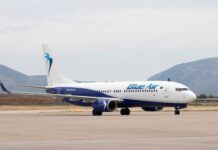