Boeing and Embraer S.A. today announced that they intend to collaborate to test environment-focused technologies through the ecoDemonstrator Program in a joint effort to improve aviation’s environmental performance. This expands ongoing cooperation between two of the world’s largest airplane manufacturers.

Frederico Curado, president and CEO of Embraer, and Marc Allen, president of Boeing International, signed a Memorandum of Understanding at the Brazil-U.S. Business Summit organized by the Brazil-U.S. Business Council. The business summit, hosted by the U.S. Chamber of Commerce, occurred during an official visit by Brazil’s President Dilma Rousseff with U.S. President Barack Obama.

Boeing launched its ecoDemonstrator Program in 2011 to accelerate testing and use of new technologies that can reduce fuel use, carbon emissions and noise. The company has so far tested more than 50 technologies with a Next-Generation 737-800, 787 Dreamliner and, currently, a 757. Through their collaboration, Boeing and Embraer are planning to conduct ecoDemonstrator tests with an Embraer airplane in 2016.

“Innovation is a key pillar of Embraer’s strategy, and we are pleased to continue our work with Boeing to support the long-term sustainable growth of our industry,” said Curado. “The ecoDemonstrator Program offers a new and valuable opportunity for collaboration between our companies to boost environmental development tests, benefiting customers, our industry and the society.”

“Industry leadership in today’s world requires creative and global collaborations that ignite progress on hard problems faster than ever,” said Allen. “Boeing and Embraer are both industry leaders committed to addressing aviation’s environmental goals through innovation and technology. Working together in this exciting new way, our companies will speed progress to improve aviation’s efficiency and reduce environmental impact.”

The ecoDemonstrator cooperation between Boeing and Embraer advances a relationship that began in 2012 when the manufacturers announced they would cooperate in ways that create value for both companies and their customers. Since then, the manufacturers have worked together to improve runway safety and support Embraer’s KC-390 defense aircraft program.

In addition, in 2015, Boeing and Embraer opened a joint biofuel research center in São José dos Campos, Brazil, to perform biofuel research and coordinate research with Brazilian universities and other institutions.

Boeing has worked with suppliers, airlines and government agencies on previous ecoDemonstrator flight tests. Those technologies include a new winglet and “bug-phobic” wing coatings that can improve aerodynamic efficiency, software applications that can improve in-flight efficiency and new types of sustainable aviation biofuel.

Embraer incorporates environmental requisites into product development through its Environmentally Sustainable Products Program (DIPAS). Embraer aircraft are designed with an emphasis on incorporating innovations and adhering to environmental norms. With the ecoDemonstrator platform, new technologies under development that can lessen environmental impact are tested in flight and mature faster. 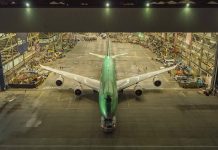 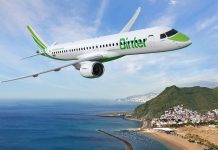