The Boeing Company (Boeing) has entered into an agreement with the Department of Justice to resolve a criminal charge related to a conspiracy to defraud the Federal Aviation Administration’s Aircraft Evaluation Group (FAA AEG) in connection with the FAA AEG’s evaluation of Boeing’s 737 MAX airplane.

Boeing, a U.S.-based multinational corporation that designs, manufactures, and sells commercial airplanes to airlines worldwide, entered into a deferred prosecution agreement (DPA) in connection with a criminal information filed today in the Northern District of Texas. The criminal information charges the company with one count of conspiracy to defraud the United States. Under the terms of the DPA, Boeing will pay a total criminal monetary amount of over $2.5 billion, composed of a criminal monetary penalty of $243.6 million, compensation payments to Boeing’s 737 MAX airline customers of $1.77 billion, and the establishment of a $500 million crash-victim beneficiaries fund to compensate the heirs, relatives, and legal beneficiaries of the 346 passengers who died in the Boeing 737 MAX crashes of Lion Air Flight 610 and Ethiopian Airlines Flight 302.

“The tragic crashes of Lion Air Flight 610 and Ethiopian Airlines Flight 302 exposed fraudulent and deceptive conduct by employees of one of the world’s leading commercial airplane manufacturers,” said Acting Assistant Attorney General David P. Burns of the Justice Department’s Criminal Division. “Boeing’s employees chose the path of profit over candor by concealing material information from the FAA concerning the operation of its 737 Max airplane and engaging in an effort to cover up their deception. This resolution holds Boeing accountable for its employees’ criminal misconduct, addresses the financial impact to Boeing’s airline customers, and hopefully provides some measure of compensation to the crash-victims’ families and beneficiaries.”

“The misleading statements, half-truths, and omissions communicated by Boeing employees to the FAA impeded the government’s ability to ensure the safety of the flying public,” said U.S. Attorney Erin Nealy Cox for the Northern District of Texas. “This case sends a clear message: The Department of Justice will hold manufacturers like Boeing accountable for defrauding regulators – especially in industries where the stakes are this high.”

“Today’s deferred prosecution agreement holds Boeing and its employees accountable for their lack of candour with the FAA regarding MCAS,” said Special Agent in Charge Emmerson Buie Jr. of the FBI’s Chicago Field Office. “The substantial penalties and compensation Boeing will pay, demonstrate the consequences of failing to be fully transparent with government regulators. The public should be confident that government regulators are effectively doing their job, and those they regulate are being truthful and transparent.”

“We continue to mourn alongside the families, loved ones, and friends of the 346 individuals who perished on Lion Air Flight 610 and Ethiopian Airlines Flight 302. The deferred prosecution agreement reached today with The Boeing Company is the result of the Office of Inspector General’s dedicated work with our law enforcement and prosecutorial partners,” said Special Agent in Charge Andrea M. Kropf, Department of Transportation Office of Inspector General (DOT-OIG) Midwestern Region. “This landmark deferred prosecution agreement will forever serve as a stark reminder of the paramount importance of safety in the commercial aviation industry, and that integrity and transparency may never be sacrificed for efficiency or profit.”

As Boeing admitted in court documents, Boeing—through two of its 737 MAX Flight Technical Pilots—deceived the FAA AEG about an important aircraft part called the Maneuvering Characteristics Augmentation System (MCAS) that impacted the flight control system of the Boeing 737 MAX. Because of their deception, a key document published by the FAA AEG lacked information about MCAS, and in turn, airplane manuals and pilot-training materials for U.S.-based airlines lacked information about MCAS.

Boeing began developing and marketing the 737 MAX in or around June 2011. Before any U.S.-based airline could operate the new 737 MAX, U.S. regulations required the FAA to evaluate and approve the airplane for commercial use.

In connection with this process, the FAA AEG was principally responsible for determining the minimum level of pilot training required for a pilot to fly the 737 MAX for a U.S.-based airline, based on the nature and extent of the differences between the 737 MAX and the prior version of Boeing’s 737 airplane, the 737 Next Generation (NG). At the conclusion of this evaluation, the FAA AEG published the 737 MAX Flight Standardization Board Report (FSB Report), which contained relevant information about certain aircraft parts and systems that Boeing was required to incorporate into airplane manuals and pilot-training materials for all U.S.-based airlines. The 737 MAX FSB Report also contained the FAA AEG’s differences-training determination. After the 737 MAX FSB Report was published, Boeing’s airline customers were permitted to fly the 737 MAX.

On Oct. 29, 2018, Lion Air Flight 610, a Boeing 737 MAX, crashed shortly after takeoff into the Java Sea near Indonesia. All 189 passengers and crew on board died. Following the Lion Air crash, the FAA AEG learned that MCAS activated during the flight and may have played a role in the crash. The FAA AEG also learned for the first time about the change to MCAS, including the information about MCAS that Boeing concealed from the FAA AEG. Meanwhile, while investigations into the Lion Air crash continued, the two 737 MAX Flight Technical Pilots continued misleading others—including at Boeing and the FAA—about their prior knowledge of the change to MCAS.

On March 10, 2019, Ethiopian Airlines Flight 302, a Boeing 737 MAX, crashed shortly after takeoff near Ejere, Ethiopia. All 157 passengers and crew on board died. Following the Ethiopian Airlines crash, the FAA AEG learned that MCAS activated during the flight and may have played a role in the crash. On March 13, 2019, the 737 MAX was officially grounded in the U.S., indefinitely halting further flights of this airplane by any U.S.-based airline.

The department reached this resolution with Boeing based on a number of factors, including the nature and seriousness of the offence conduct; Boeing’s failure to timely and voluntarily self‑disclose the offence conduct to the department; and Boeing’s prior history, including a civil FAA settlement agreement from 2015 related to safety and quality issues concerning the Boeing’s Commercial Airplanes (BCA) business unit. In addition, while Boeing’s cooperation ultimately included voluntarily and proactively identifying to the Fraud Section potentially significant documents and Boeing witnesses, and voluntarily organizing voluminous evidence that Boeing was obligated to produce, such cooperation, however, was delayed and only began after the first six months of the Fraud Section’s investigation, during which time Boeing’s response frustrated the Fraud Section’s investigation.

The department ultimately determined that an independent compliance monitor was unnecessary based on the following factors, among others: (i) the misconduct was neither pervasive across the organization, nor undertaken by a large number of employees, nor facilitated by senior management; (ii) although two of Boeing’s 737 MAX Flight Technical Pilots deceived the FAA AEG about MCAS by way of misleading statements, half-truths, and omissions, others in Boeing disclosed MCAS’s expanded operational scope to different FAA personnel who were responsible for determining whether the 737 MAX met U.S. federal airworthiness standards; (iii) the state of Boeing’s remedial improvements to its compliance program and internal controls; and (iv) Boeing’s agreement to enhanced compliance program reporting requirements, as described above.

The Chicago field offices of the FBI and the DOT-OIG investigated the case, with the assistance of other FBI and DOT-OIG field offices.

Individuals who believe they may be an heir, relative, or legal beneficiary of one of the Lion Air Flight 610 or Ethiopian Airlines Flight 302 passengers, in this case, should contact the Fraud Section’s Victim Witness Unit by email at: Victimassistance.fraud@usdoj.gov or call (888) 549-3945.

Source: US Department of Justice

After the settlement, Boeing CEO sent this message to his employees: 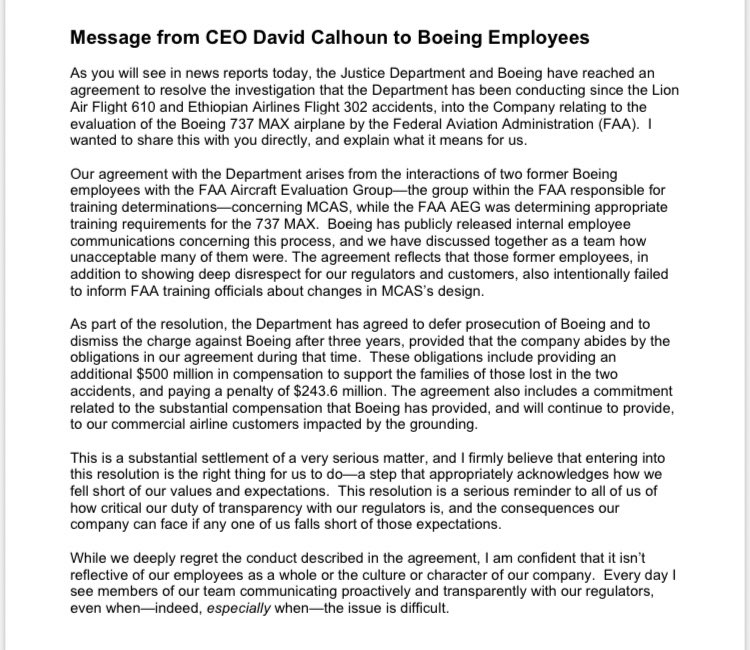