Update on the A400M for the Belgian Air Force Programme

In parallel to the onsite visit with the Luxembourg delegate onsite at the Airbus Seville Assembly plant to see up close cn104, the Belgian Air Force also seized the opportunity to update the press and guests regarding the A400M Belgian Programme. After an uneventful flight onboard the Belgian Air Force A321, the delegation arrived in Seville where AIRBUS has its A400M Assembly Plant.

The A400M is not unknown to the grand public: it has been seen ‘up close’ in several airshows, including the Belgian Air Force Days in September 2018. It’s a matter of a few years before the aircraft joins active duty in the Belgian Air Component.

The A400M was launched in 2003 to meet the combined needs of seven European nations grouped within the Organisation for Joint Armament Co-operation (Belgium, France, Germany, Luxembourg, Spain, Turkey and the United Kingdom), with Malaysia joining the program in 2005. This explains the extreme versatility of the aircraft which made its first flight on 11 December 2009. The first A400M was delivered to the French AF on August 1, 2013.

The external width of its fuselage (5.64 metres) is similar to that of the widebody A330 / A340. The dimensions of its cargo hold, four metres wide and four metres high, and a length of almost 18 metres, allow it to carry many loads with outsized dimensions, such as an NH90 or CH47 Chinook helicopter, or two Stryker infantry transport vehicles (ICVs) for military use of 17 tonnes each. It can also carry a 25-tonne semi-trailer vehicle carrying a six-metre container, or a lifeboat, or high-capacity lifting equipment such as excavators or mobile cranes needed for rescue missions on the scene. ‘a natural disaster.

In addition, its unique landing performance makes the A400M the only transport aircraft capable of delivering these materials directly to the scene. Equipped with a 12-wheel main landing gear designed to operate on unprepared, rocky or sandy tracks, an impact damping system that is effective in the aeronautical structure, and with improved damage resistance caused by foreign objects, the A400M is able to land and take off from any type of runway, including short, loose and unmanaged runways meeting the CBR4 standard.

Equipped with a 32-tonne motorised winch and an optional 5-tonne crane, the handling of the loading or unloading is carried out by a single operator (Loadmaster) from a computer workstation, from which he can plan loads from a database.

Able to fly quickly at high altitude, the A400M is also the ideal air to air refueller for fighter planes and other wide-body aircraft: it can refuel at speeds and altitudes suitable for military planes equipped with probes. Refuelling can be done by two under-wing pods or a refuelling unit installed in the fuselage. With its integrated equipment, it can be very quickly converted into a tanker aircraft. The A400M, which can itself be refuelled, is the only aircraft to offer such a level of adaptability.

The A400M was specifically designed for paratroop dropping at both high and low altitudes (from 12,000 metres / 40,000 feet for Special Forces operations to about four metres / 15 feet for low-level cargo drops). It can carry 116 fully equipped paratroopers, likely to jump two by two from the ramp or side jump doors.

After an uneventful flight to Seville, the delegation was greeted onsite at the Airbus A400M Assembly Plant. After some refreshments and pictures in front of the A400M tail cn 106, the delegation and the guests headed to the nose of Luxembourg A400M cn 104 in order to attend official speeches.

First glance at the @BeAirforce and @Luxembourg #A400M Atlas airframes at the @Airbus Military facilities in Sevilla today. Looking forward to add this military transport aircraft to our fleet as from half 2020. #wemakethedifference pic.twitter.com/PyejifvD7T

In a year, the Belgian Air Component will put its first A400M “ATLAS” aircraft into service to replace the last nine C-130H still in service. The estimated cost for Belgium (7 aircraft) is about 1.2 billion euros. This budget does not include the construction of the new hangars, the dedicated training and the simulator to be located in Melsbroek.

The first model MSN 106 (106th of A400M built) is expected to fly for the first time in 2020. The withdrawal of the last C-130H (12 bought new, 2 lost and the purchase of a used aircraft) should be achieved by January 2022 which will consolidate 50 years of service in the Belgian Air Force.

Mr Nico Petersen, Head of A400M Industrial Production took the stage to warmly welcome the delegations and the guests, with a stunning A400M in the background, displaying the Luxembourg and Belgium flag.

The Minister also highlighted that although the fuselages are produced in Bremen, Germany, the front tips come from France and the wings are manufactured in the Filton plant in the UK, no less than five companies Belgian firms are involved in the manufacturing process; assuring know how and deliverable in the overall process.

The speeches were concluded with Jorge Caro, General Secretary Airbus Defence and Spain, thanking customers for their trust and ongoing efforts in this major project.

General Vansina, Chief of COMOPSAIR: “These eight A400Ms (note: 7 from the Belgian Air Component and 1 from the Luxembourg Air Force) will be more than enough, especially as we are integrated into European Air Transport Command (EATC). This means that if we have excess capacity, it will be made available to the EATC. In opposition if we needed a higher capacity we would call EATC. This structure coordinates all transport in Europe, which is a good example of European defence cooperation.”

The A400M is a revolutionary aircraft in the area of tactical transport and it takes time to perfect it.

There will be a European standardisation around this aircraft which will allow to exchange procedures and reduce budgets. Neighbouring countries such as France, Germany or the United Kingdom already operate this aircraft.

It must be remembered that a Turkish A400M was lost during a test flight in 2015. Three of its engines returned to idle during a take off. The Full Authority Digital Engine Control (FADEC) system has been implicated. Other problems such as the simultaneous para drops with the two doors simultaneously, the gearboxes of the very impressive TP400 engine or even the warning system, have delayed the very expensive Airbus program over the years. The original project for the replacement of the C-130s and C-160s of seven NATO countries was € 20 billion and would have already reached € 30 billion. It should be noted that South Africa, which had ordered eight aircraft, gave up following the many problems. Portugal has withdrawn since 2003. In addition, Malaysia has added to the buyers with four aircraft.

Originally Belgium was to take delivery of its first Atlas in 2018 with industrial returns proportional to the order.

Colonel Bruno Beeckmans – the officer in charge of the A400M programme: “The programme really kicked off for Belgium in 2003 and from the start, we had seven planes and one Luxembourg plane. We are actually talking about eight planes in a bi-national squadron. Already today we have members of Luxembourg crews who fly on C-130 without distinction with our crews members to prepare for the A400M.”

This is a first, and for me who work at the General Staff, I can see the political challenges that lie above the army and that push to find solutions especially for the future of a European army.

For me the first enemy is not China or Russia, but it is just between us European countries. If we can prove that it works between two small nations, it is an example for others. It’s more complicated with the French and Germans because there are national interests and the industry involved.

Cheerful Luxembourg and Belgian Delegation with AIRBUS official posing for the ‘Momentum’, namely from left to right :

Thereafter, delegations and guests enjoyed a detailed tour, one stage at the stage (except Armament for obvious security reasons), of the Assembly plant, hosted by Airbus. For example, the different stages of the assembly then the testing of the instruments (although aircraft on the ground but aircraft gets the illusion to be airborne), the propellers phase; to up close visit of a finalised German A400M (MSN090).

Aviation24.be and the authors would like to express their gratitude and thank the Belgian Defence for making this visit possible. We also would like to thank AIRBUS and their onsite staff for their welcome, the detailed insights, tour and additional material provided. 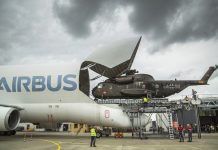 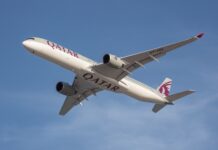