After 18 months in executive and non-executive roles, Christoph Mueller has informed the Board that he intends to step down as Chairman of the Board of Directors of Swissport International AG.

Christoph Romanus Mueller, Chairman of the Board of Directors of Swissport International AG, has informed the Board that he intends to step down after 18 months in executive and non-executive functions. He will remain a shareholder and continues to be available as an independent advisor.

Effective 1 July 2022, David Siegel, an aviation industry veteran and member of Swissport’s Board of Directors since December 2020, will serve as interim Chairman of the Board until a permanent successor for Christoph Mueller has been appointed.

Christoph Mueller joined the Board of Directors of Swissport in December 2020. At the peak of the COVID-19-related crisis in global aviation – as the company was completing a comprehensive financial restructuring – the designated Chairman of the Board initially served as interim CEO and as interim CFO at the request of the new shareholders of Swissport – large US and UK investment funds. He set the strategic direction for Swissport and was instrumental in building a new, high-calibre management team around the globe. In his role as Chairman, he also established an effective, modern corporate governance structure with the necessary committees and their chairpersons. Christoph Mueller also served as Chairman of the Audit Committee and other subcommittees.

“We would like to thank Christoph for his significant contributions to transforming Swissport into an effective and agile organisation and for his stewardship over the past 18 months, both in executive and in non-executive roles,” says David Siegel, member of the Board of Directors of Swissport International AG. “Although we knew that this step would come, as Christoph would like to focus again on his supervisory board positions at several airlines, we regret his departure. I wish Christoph only the best for his personal and professional future.”

Christoph Mueller joined Swissport in December 2020 as a member of the Board of Directors and its designated Chairman. He was interim Chief Executive Officer from 1 January 2021 until Warwick Brady, Swissport’s current CEO, could assume his role on 1 May 2021, and was then appointed as Chairman of the Board.

Christoph Mueller is a Non-Executive Director of WestJet Airlines Limited, Inmarsat and Cathay Pacific Airlines. He previously held senior executive positions in the aviation sector, including CEO of Sabena SA (until its bankruptcy in 2001), Brussels Airlines (which he helped create in 2002), Air Lingus plc, Malaysia Airlines Berhad and Chief Digital and Innovation Officer at Emirates Airline. 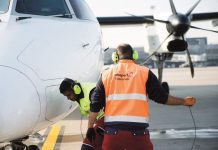 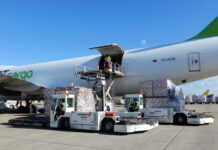