LATAM Airlines Group has entered into non-disclosure agreements with various stakeholders, and has developed and made available to them certain material non-public information; and has requested proposals from its most significant creditors and majority shareholders. The Disclosed Proposal contemplates the raising of new funds of over US$5 billion through the issuance of new equity and debt.
André
ex Sabena #26567
Top

Here is Google Translation of Council of Ministers from Malagasy to English https://centreforaviation-com.translate ... tr_pto=nui

The airline could be relaunch under new name: Madagascar Airlines

Sorry only in French, but maybe someone could made an article for Aviation24.be in English 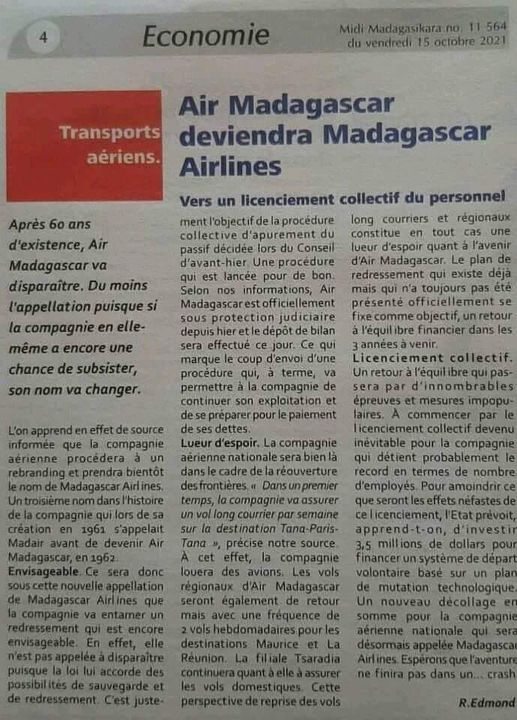 CityJet is gradually building up services once again with SAS and is now only operating eight of its CRJ900s.

CityJet plans to expand its fleet with at least five E-Jets soon, ten more CRJ900s in 2022, and potentially the E2 or A220 in the longer term. The carrier is also in talks with five European airlines regarding cooperation in summer 2022. Also with Brussels Airlines?
André
ex Sabena #26567
Top

Fiji Airways could be viewed as “insolvent” in terms of liabilities vs assets, says National Federation Party leader Professor Biman Prasad, after there were calls to increase the government guarantee to the airline domestic and off-shore borrowings from $221 million to $273 million.

Fiji Airways cannot rely on continued government-guaranteed loans if the carrier is not operational, says Parliament.

HNA Group creditors have voted to approve the company’s restructuring plan, according to a court comment. HNA will receive a strategic investment of US5.88 billion) after its restructuring.

LATAM Airlines Group unsecured creditors, frustrated by a bankruptcy process that has dragged on for nearly 18 months, requested a mediator to help devise a plan for the Chilean airline to emerge from bankruptcy.
André
ex Sabena #26567
Top
Post Reply
244 posts