sean1982 wrote: ↑
09 Aug 2019, 11:43
So what do you suggest if someone refuses to come along? Knock them out first? Sedate them? What he and other passengers think is irrelevant, if a captain decides you’re not going, you’re not going. End of story

The captain is allways allowed indeed to decide it's a no-go. But the captain then has to respect legislation: tell the passenger he is denied boarding, give him the indemnity (400 € for a Faro-Stansted), rebook them on the next possible flight, and eventually book a hotel.

When crew (cockpit or cabin) refers to unruly behavior, they must respect the Contract of Carriage. And Ryanair's C of C is clear: when safety or security is as stake, passengers must obey all orders. But for all other matters, the C of C states that the crew must be reasonable: "...if, in our reasonable opinion, we may take any measures we consider reasonably necessary to deal with the situation, including restraining you. You may be removed from the plane and refused a seat on any other flight, and may be prosecuted for offences you committed on the plane...

That someone asks to be seated next to family member, is no unreasonable question. That someone switches to an empty seat next to a family member, is not unreasonable: it happens with all airlines regularly. How this cabin crew then managed that situation, is uncertain. But the newspapers quote witnesses, saying that the passenger wasn't unruly or abusive. So there must have been a better way to solve the issue then calling the police.

When a passenger is removed for disruptive behaviour than no indemnity needs to be paid, thankfully! That would be the world upside down.

Passengers tend to side with a difficult passenger once the decision is made to remove him from the flight (unless he was a pain in the ass to everyone). Why? Because people tend to defend the (what they perceive as) underdog.

It has become normal these days that people treat people in customer facing roles like pieces of shit. They are impolite, obnoxious, intrusive and claim to have a lot of rights that they don’t actually have.

The C and C is clear. In OUR reasonable opinion. Not the passengers, not the family, not the other passengers, no the airline and so by appointed directive ... the captain. If in his opinion it is needed to remove that pax from the flight, then that’s how to cookie will crumble. It’s up to a judge later on to decide whether or not it was not reasonable should it come to that.

This is a good example

luchtzak wrote: ↑
08 Aug 2019, 15:17
This video appeared on social media, the passenger is forcefully being removed from the aircraft after he allegedly punched a flight attendant.

There should be other ways to remove somebody from the flight ...


When you have no valid arguments, yell 'racism'.
Top

Ryanair pilots represented by the Forsa union vote to strike in Ireland.

Ryanair's Ireland-based pilots represented by the Forsa union have announced they will join a strike by their UK counterparts on 22 & 23 August after mediation talks failed to end in an agreement.

And Ryanair unions representing cabin crew in Spain announced plans to hold 10 days of strikes in September 2019 unless the Irish airline changes its plans to close several bases in the country.

In other news, Ryanair will expand its operations from Nis in November 2019 with flights to Malta.
André
ex Sabena #26567
Top

Ryanair's Ireland-based pilots represented by the Forsa union have announced they will join a strike by their UK counterparts on 22 & 23 August after mediation talks failed to end in an agreement.

Ryanair has been granted an injunction to stop a 48-hour strike planned by its Irish-based pilots, as it awaits the outcome of a court action to prevent its UK-based pilots walking out.
André
ex Sabena #26567
Top

Ryanair is in talks for a possible entry to the Armenian market from 2020, after unveiling its first services to Georgia.

Ryanair to face a strike by pilots in the UK, as a London court will allow a proposed strike over pay and conditions.
André
ex Sabena #26567
Top

Hope they will fly from Brussels or Eindhoven to Yerevan and Tbilisi. Beautiful countries both, with Armenia being my favourite!
Top 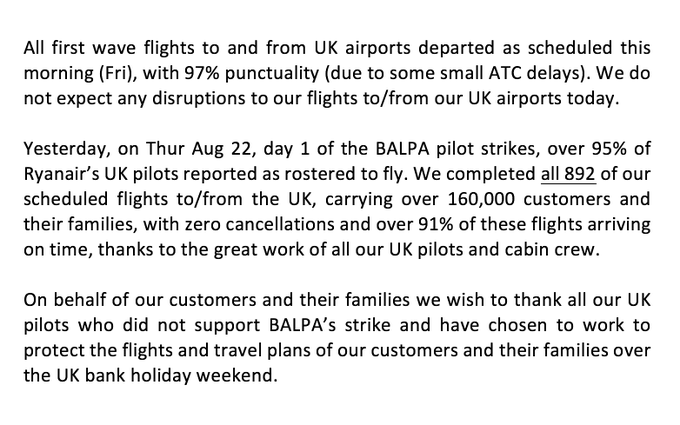 Ryanair is to close its Spanish bases in Las Palmas, Tenerife South, Lanzarote and Girona from January 2020, putting the jobs of more than 500 pilots and cabin crew at risk.
André
ex Sabena #26567
Top 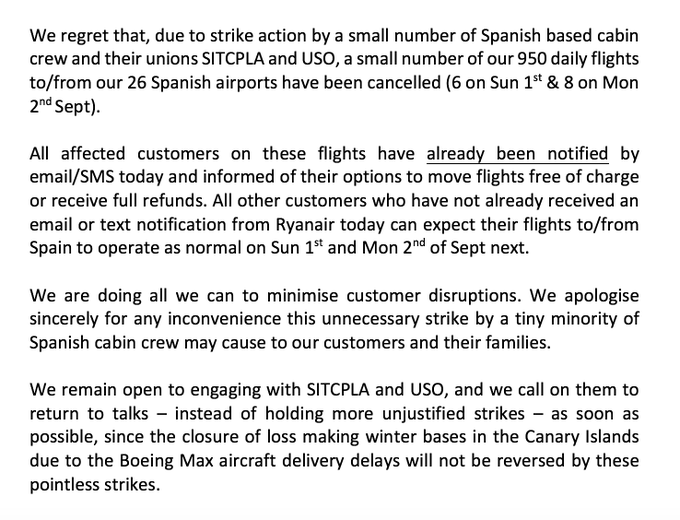 Ryanair Group aims to use its Buzz Polish subsidiary to operate charters from the Canary Islands to avoid the pitfall of wage increases in Spain.
André
ex Sabena #26567
Top

Ryanair has agreed on a 4-year collective labour agreement with the pilot union Vereinigung Cockpit, to cover all Ryanair’s directly employed pilots in Germany until March 2023.
André
ex Sabena #26567
Top

Ryanair Group chief executive Michael O’Leary narrowly secured approval from shareholders for a bonus scheme that could earn him €100 million over five years as he revealed up to 700 pilots could lose their jobs.

Ryanair pilots based in the UK have cancelled five days of strikes set for this month, as unions and the low-cost airline gear up for further talks.
André
ex Sabena #26567
Top

Ryanair confirmed that its cabin crew based in the UK have voted by a majority of 80% in favour of a four year Collective Labour Agreement, to cover all Ryanair’s directly employed cabin crew in the UK until March 2023.
André
ex Sabena #26567
Top

Ryanair confirmed that its pilots based in Germany have voted by a majority of 99% in favour of a 4-year Collective Labour Agreement, to cover all Ryanair’s directly employed pilots in Germany until March 2023.

On another issue, Ryanair urged the US and the EU to pull back from a tariff war over aircraft subsidies and said he would ask Boeing to “eat” any counter-tariffs imposed on the US firm by the EU.

About fleet expansion, Ryanair can wait out price rises sought by plane manufacturers before placing any large orders, says chief executive Michael O’Leary. The carrier will finalise an order for the MAX 10 once the current version returns to service. Ryanair is also interested in 100 (!) A321neos for Lauda.
André
ex Sabena #26567
Top

Passenger wrote: ↑
23 Apr 2019, 15:18
After the massive strike by Ryanair pilots in/around October 2018, Ryanair closed its base at Eindhoven, giving the Dutch pilots the choice between relocation abroad or end of contract.

Eight Ryanair pilots went to court, and a Dutch judge has just ruled in favour them. Ryanair must pay each of them salary and indemnity between 380.000 and 480.000 Euro.

Edit: the choice Ryanair gave them, was a relocation or becoming a "mobile pilot", meaning they would get a new base every 3 months.

Ryanair now also has lost the appeal court case.
One of the eight verdicts:
https://uitspraken.rechtspraak.nl/inzie ... :2019:5645
Top

Shortly after Brussels Airlines announced the cancellation of its route to Nantes, Ryanair jumped in and now launches 4-weekly flights from Charleroi to Nantes.