Airbus may improve the A320neo family to defend against Boeing’s plans for new middle of the market plane. The "A321neo-plus-plus" would feature a new carbon-composite wing, among other enhancements.
André
ex Sabena #26567
Top

Airline is modernizing its domestic fleet with A321 planes
Ten long-haul aircraft deferred from delivery in 2019, 2020By Michael Sasso

(Bloomberg) -- Delta Air Lines Inc. is expanding an order for Airbus SE’s A321 narrow-body jetliner by 30 planes while delaying delivery of 10 wide-body aircraft from the European manufacturer.
The larger order of A321-200 jets will bring deliveries of that plane to 112 by 2021, Delta said in a a statement Thursday. It currently operates 19 of the planes, which have a list price of $116 million before customary discounts.
Adding more of the Airbus single-aisle planes will help Delta modernize its domestic fleet amid a robust U.S. business, while heavy overseas competition weighs on international fares. The airline will use the A321s to replace its 110 MD-88 jets, which are 25 years old on average and so loud that the company recently stopped flying them at New York’s LaGuardia Airport to alleviate noise concerns.
“The domestic business is our bread and butter and that is healthy and we continue to think that it’s going to stay healthy,” Chief Executive OfficerEd Bastian said in a presentation to analysts in New York. The MD-88s will be retired by 2020, he said.
Top

The issues with the P&W engines for the A320NEO are still not resolved:

(Bloomberg, 07/27/2017) -- Continuing issues with the revamped A320neo version of Airbus’s narrow-body workhorse remain a major concern, Enders said, with fixes developed by engine supplier Pratt & Whitney proving unreliable under operating conditions.
The issues with Pratt’s geared turbofan mean that delivering the close to 200 A320neos targeted -- of which just under half are powered by the United Technologies Corp. division -- has become “more challenging,” Airbus said. It handed over 59 Neos in the first six months.
“There are just too many maturity issues on this engine,” Enders said. “That is frustrating for us, that’s frustrating for the customers. We have too many removals of engines on aircraft that are in service. The situation for us all is very unsatisfactory.”
While the handover of Pratt-powered Neos was initially held up by cooling problem that required airlines to delay start-up in hot conditions, the latest glitches concern issues spanning bearings to the combustion chamber and plates, the CEO said.
Top

JetBlue (US) to become the launch customer for the A320 Family Airspace cabin starting late 2020.
André
ex Sabena #26567
Top

Airbus no longer plans to reach its goal of 200 A320neo deliveries for 2017 due to engine availability issues and allocation between the OEM and spare pools. A320neo deliveries are now expected to be slightly below that target.
André
ex Sabena #26567
Top

About the engine shortage, a picture is worth a thousand words. 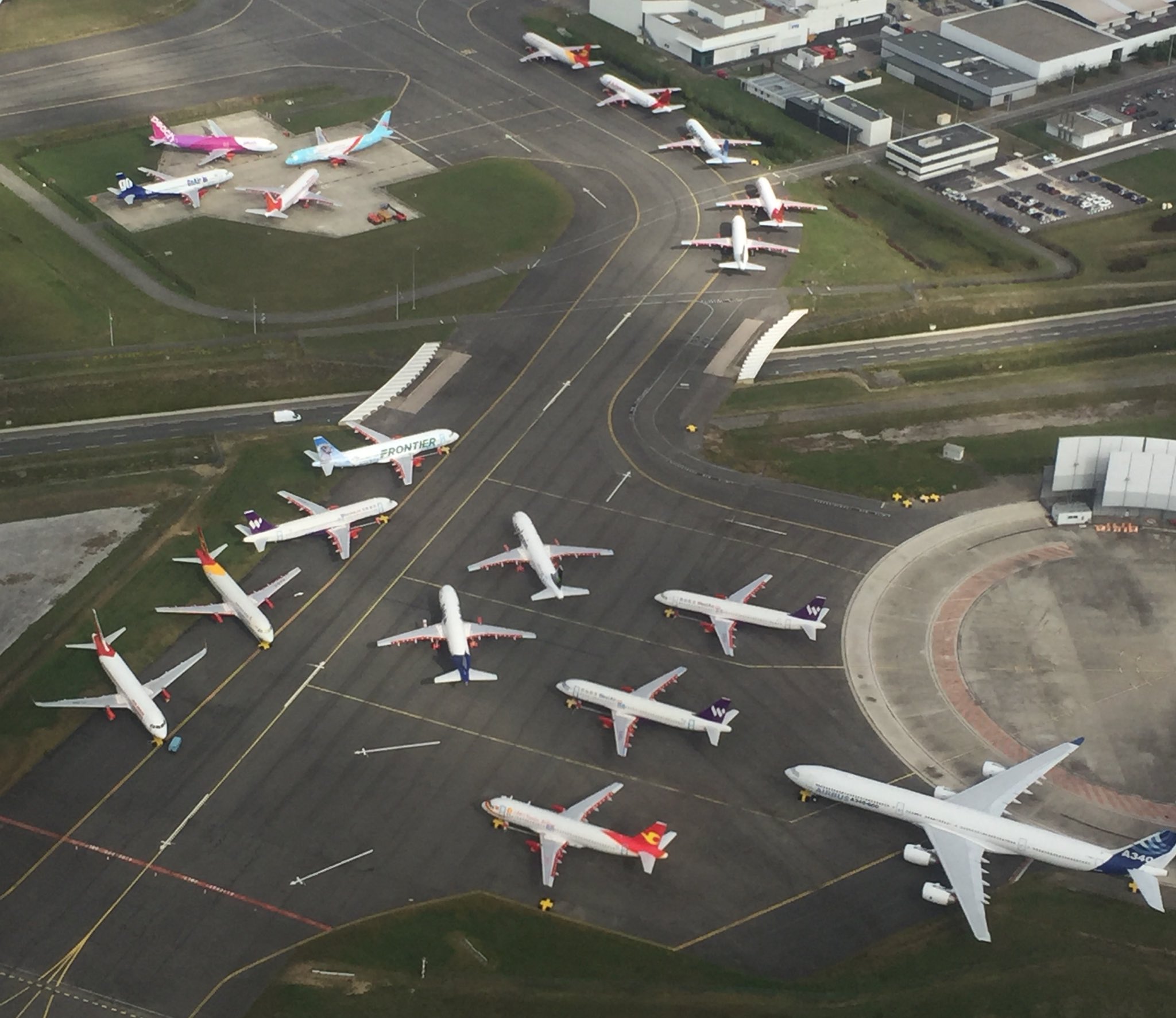 Airbus secured the largest order in its history: 430 aircraft of the A320/321NEOs:

Airbus Seals Record 430-Jet Deal to Outshine Boeing in Dubai
(Bloomberg) -- Airbus SE announced the biggest commercial-plane deal in its history, securing an order valued at nearly $50 billion for 430 planes from its single-aisle A320neo line and dramatically overshadowing the deals won by Boeing Co.
The pact with U.S. investor Indigo Partners gives Airbus the upper hand at the Dubai Air Show, where it has been trailing its U.S. rival in orders. The purchase would also mark a crowning achievement for Airbus sales chief John Leahy, who is set to retire after a multi-decade career in which he built an order book for thousands of aircraft and lifted the European planemaker into a duopoly position with its U.S. rival.
For Indigo Partners, led by Bill Franke, the Airbus deal provides upgraded single-aisle jetliners to boost the fleets of ultra-low-cost carriers from Denver to Budapest. The aircraft will go to airlines in Indigo’s investment portfolio: Frontier Airlines, Mexico’s Volaris, European carrier Wizz Air Holdings Plc and upstart JetSmart, which began operating this year in Chile. The deal includes 273 A320neo jets and 157 of the larger A321neo variant. Based on the list price of the A320neo, Airbus’s best-selling single-aisle jet, the purchase is worth $49.5 billion before customary discounts.

I think they might build a gold statue for John Leahy at Airbus HQ, he definitely goes out with a big bang... Airbus might (probably will) regret it that he's going to retire

EasyJet will take delivery of its first A321neo in July 2018, which is expected to deliver an 8-9% cost per seat saving compared to an A320neo, primarily due to their 235-seat configuration.
André
ex Sabena #26567
Top

American Airlines chose Services by Airbus to provide cabin upgrades for 202 of its A321s in-service. The airline will be the first retrofit customer for Airbus’ new Airspace XL bins.
André
ex Sabena #26567
Top

Delta Chooses Airbus Over Boeing in $12.7 Billion Jet Deal
(Bloomberg)  Delta Air Lines Inc. ordered 100 of Airbus SE’s A321neo jetliners, a deal with a list value of $12.7 billion, in a major victory for the European planemaker over Boeing Co. Deliveries of the single-aisle planes will begin in early 2020 and the transaction includes options for an additional 100 aircraft, Delta said in astatement Thursday. The airline’s decision dealt a setback to Boeing’s efforts to sell its newest 737 model, the Max 10.
Delta chose the Airbus planes after battling Boeing in a trade dispute involving another narrow-body plane, Bombardier Inc.’s C Series. Boeing persuaded the U.S. Commerce Department to slap 300 percent duties on the new Canadian plane, contending that Bombardier sold the C Series to Delta at well below cost.
The carrier’s Airbus jets will be powered by Pratt & Whitney’s geared turbofan engines, giving the United Technologies Corp. division a boost after a series of manufacturing hurdles, delivery delays and technical glitches with the turbine.
The A321neos will replace Delta’s 1990s-vintage McDonnell Douglas MD-90 jets, as well as aging Boeing 757 and Airbus A320 aircraft. Delta is expected to use the new planes for domestic flights and shorter international routes. The carrier will outfit Airbus’ longest narrow-body jet with seating for 197 people, including 20 in first class.

Airbus is considering increasing production rates for its single-aisle A320s, as airlines around the world place orders for hundreds of planes to meet surging demand for air travel.
André
ex Sabena #26567
Top

Tonight I will fly the Airbus320 Neo for the first time with Lufthansa....

All A320Neo's with faulty Pratt engines grounded in India!
Visit my flights on: http://www.quixoticguide.com
Top

Airbus had taken a big advantage over Boeing by rolling out its A320neo more than one year before the 737MAX. But that advantage is melting down at high speed with all the engine problems of the A320neo!
André
ex Sabena #26567
Top

Airbus completed the longest flight ever for the A321LR, flying from Toulouse to the Seychelles.
André
ex Sabena #26567
Top

Airbus plans to increase production of single-aisle A320-family aircraft to 63 a month. The production increase will take effect in 2019, accelerating previous plans to lift output to 60 aircraft a month by the same deadline.
André
ex Sabena #26567
Top
Post Reply
195 posts