Minister of Foreign Affairs of the Central African Republic announced 23 hours ago that RwandAir will begin flights to Bangui. Routing will be Kigali-Bangui-Douala-Bangui-Kigali and flights will be operated 2 times a week

So i m little bit suprised to see RwandAir flights to Bangui even if this route was opened before covid crisis. Bangui is not a big market and Kenya Airways resumed Bangui route, few years ago.

What are the most popular destination from CAR on the RwandAir network ? Dubai ? Mumbai ? Guangzhou ? Johannesburg ? Brussels ? 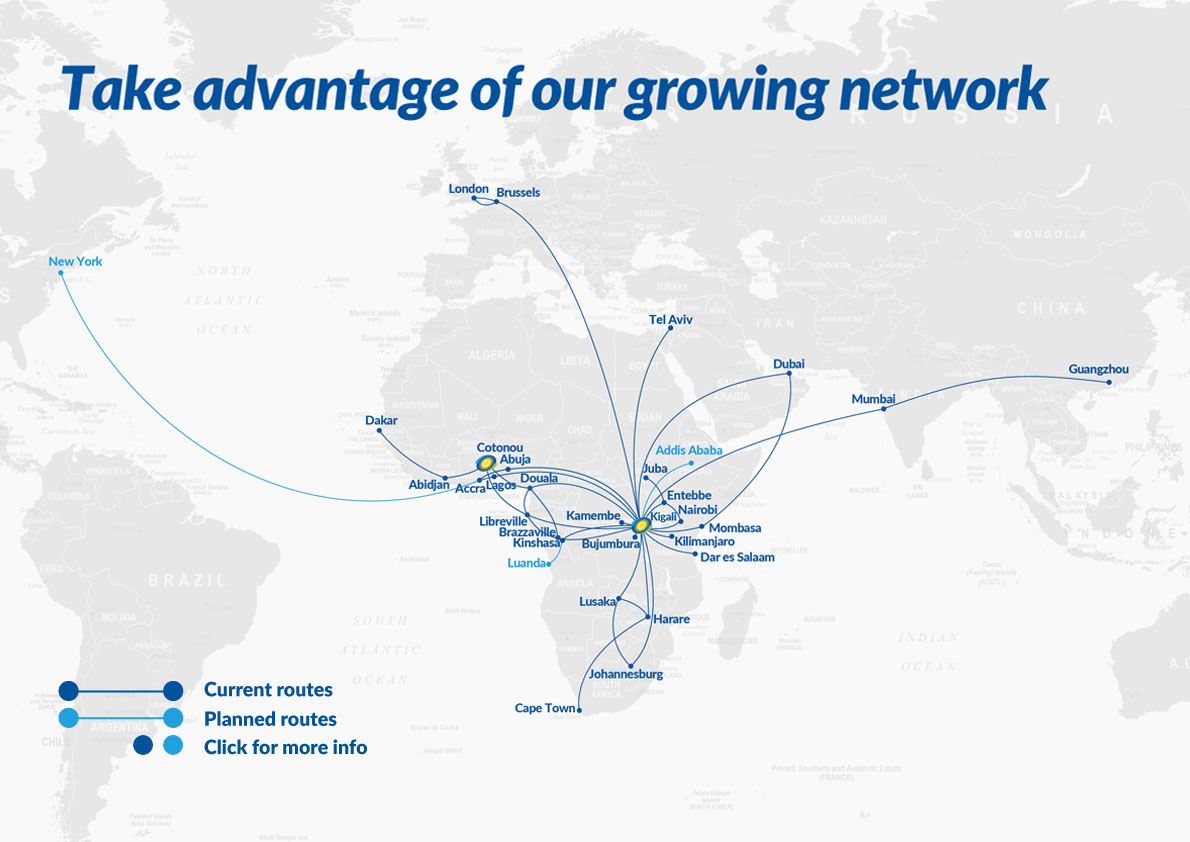 RwandAir B737-800 9XR-WG operating the Kigali-Dubai service diverted to Muscat due to bad the weather at Dubai, on 17Jan21.

It's porbably one of few destinations outside Africa that i want to see on RwandAir Network. However in 2018, Oman Air planned to serve Rwanda in the future (i think it's now postoponed due covid crisis).

"Abdulaziz al Raisi, CEO, Oman Air, said: “The launch of flights to Casablanca in Morocco from July 1 is part of these restructuring initiatives. Currently, there are four weekly flights to Guangzhou in China and we are looking at other cities such as Beijing and Shanghai.”

On the African side, the airline will be targeting countries like South Africa and Rwanda in the next few years.

RwandAir and Oman Air have already a partnership via a Interline Ticketing Agreement (https://www.omanair.com/gbl/en/alliances-and-partners). Kigali is now on Oman Air booking engine, but i don't know if it's due to the Interline Agreement or the Oman Air / Ethiopian Airlines code share.

RwandAir or Oman Air, i hope one day to make a Paris-Muscat-Kigali trip.

Kigali-Bangui-Douala flights are confirmed by RwandAir, but they are waiting for some papers from Cameroon.https://en.igihe.com/news/article/rwand ... -to-bangui

I m still sceptical about this route. However it's interesting to see on various facebook pages and groups of Central African diaspora, that many people wanted to see a Bangui Brazzaville route. In deed i remmember that TAAG Angola from 2007 to mid 2010s has operated a Luanda-Brazzaville-Bangui-Ndjamena service.
Top

Translate from Kinyarwanda, from the the official Twitter page of His Eminence Antoine Cardinal Kambanda

The #Angola Ambassador is pleased that in #Rwanda we have seen Cardinals, we both enjoy the good relations between our countries and discuss how the #Church in Rwanda and #Angola are getting closer. 1/2

@FlyRwandAir is about to begin its journey, Christians in #Angola will come to #Kibeho on a pilgrimage, and we also have a 500-year history of the Church in Angola to visit.


In France we have Lourdes, in Rwanda they have Kibeho. Kibeho hosts pilgrims from around the world (ok number of visitors is lower than in Lourdes^^)

I don't know if it will the begining of regular flights between Angola and Rwanda (Luanda is on the list of futur RwandAir destination since few years), or in a first time only special flights.

A new lockdown started at Kigali, on 19 January 2021 (for 2 weeks), where are recorderd the highest number of covid cases. Kigali Airport still receiving regular flights, contrary to the first nationwide lockdown the only domestic route from Kigali operated by RwandAir to Kamembe (south west of Rwanda, near the DR Congo Rwanda boarder) is not suspended 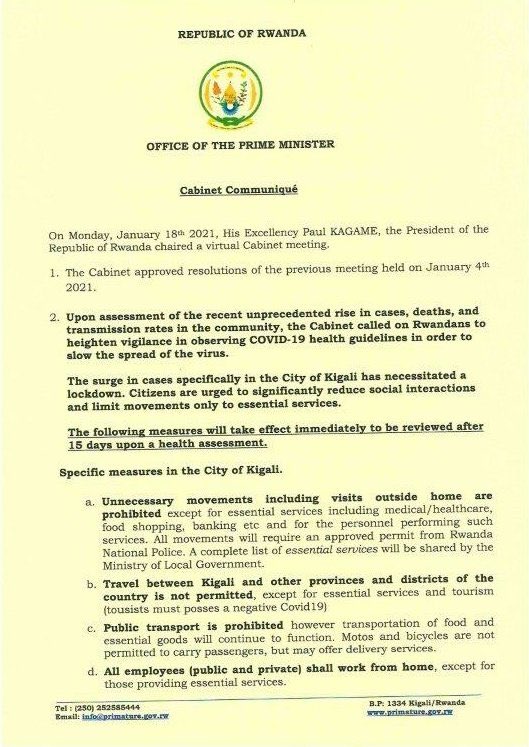 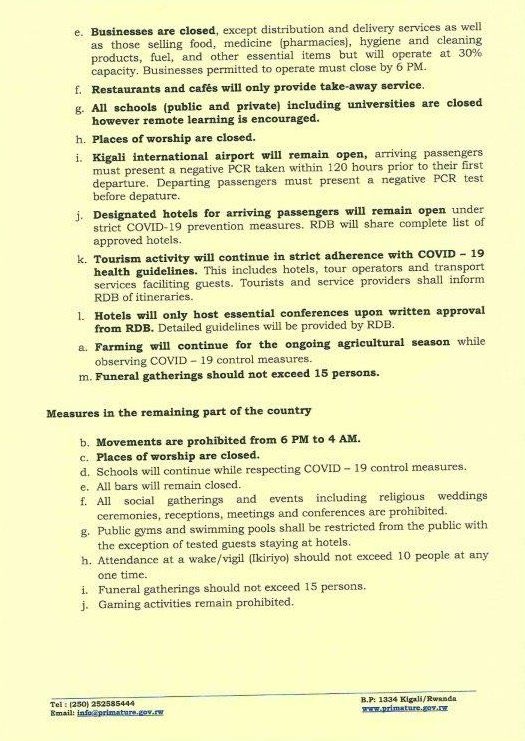 Another good article, from the very serious Kenyan Newspapers The East African which is circulated in East Africa (Kenya, Uganda, Tanzania and Rwanda)

Executives at Kenya Airways, RwandAir and Uganda Airlines all concede to a challenging business environment that has seen a rise in costs, cutbacks in capacity and a revision of business projections.


Just like its counterparts in the region, the carrier recorded a sharp drop in passenger traffic, with its key routes caving under the weight of the Covid-19 pandemic, despite them seeing the airline through last year’s turbulence.

Upon resumption of its flights in August through December last year, passenger numbers were boosted by repatriations of citizens and business travel especially on the Guangzhou and Dubai routes.

“The traffic trend was initially positive when we resumed services last August, but we are now seeing a decline in demand on our key routes like Dubai and China due to new Covid-19 testing protocols even for connecting flights, where now two tests are required,” said Musoni Jimmy, RwandAir’s head of global operations.

He said two tests require more money and time, which is discouraging many people from travelling while “the restrictions on business travellers by China, where only its citizens and those with work permits are allowed into the country, has also affected the market.”

“We are seeing a decline across our routes and entire business, so we still have a long way to go,” he added.

He said that as the pandemic continues to wreak havoc in the carrier’s key markets, waning traveller confidence is resulting in a significant decline in leisure and business travel. Mr Musoni said services on the UK route, have been reduced to a single weekly flight from the previous three because of a slump in demand.

“We are operating at 50 per cent of our capacity across the network. The UK route is a major issue for us now and we have reduced the frequency because of low demand. We are operating it because we have to maintain our presence there,” he added.

When the airline reopened last August, London, China, Entebbe Johannesburg, Lagos and routes to West Africa initially performed well, although sub-optimally. Dar es Salaam, Entebbe and Nairobi, were the least performing routes although they picked up towards the end of the year.

Revenue streams were supported by cargo which continued to perform well with the airline reconfiguring one of its A330’s for cargo. RwandAir is now banking on the early arrival of a Covid-19 vaccine in the country to change its fortunes. “We expect quicker market recovery as a result of the positives that come with early vaccine arrival,” said Mr Musoni.

UK bans flights to and from the UAE, Rwanda and Burundi

1st flight to Bangui this morning. According to the Rwandan public media, there were 75 passengers whose final destination was Bangui. The flight making a stopover in Douala. Flight operated by B737-800 (RwandAir WB212) 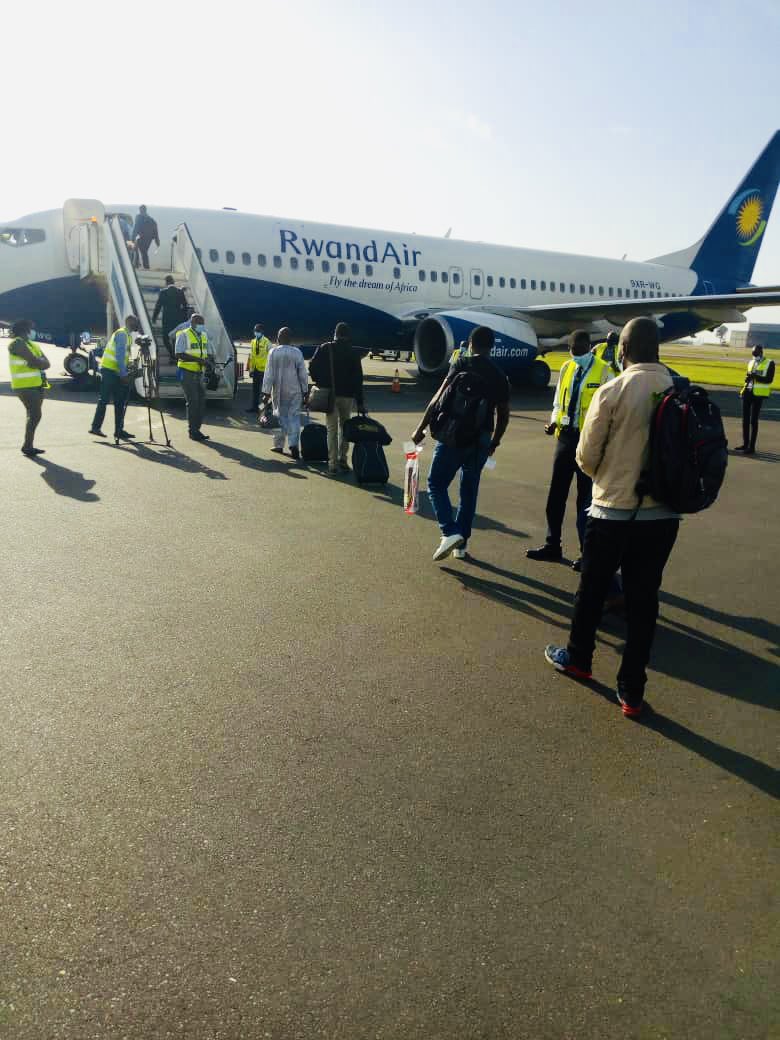 RwandAir operates soem flights for the Rwandan army deployed in peace missions in Africa or Haiti, replacing more and more Ethiopian, EuroAtlantic or Air Europa who have contracts with the UN.

RwandAir A330s are regular visitors to Bangui, as here in Bangui, in 2017. Rwanda does not have military transport planes.

Credit to the author of the Photo 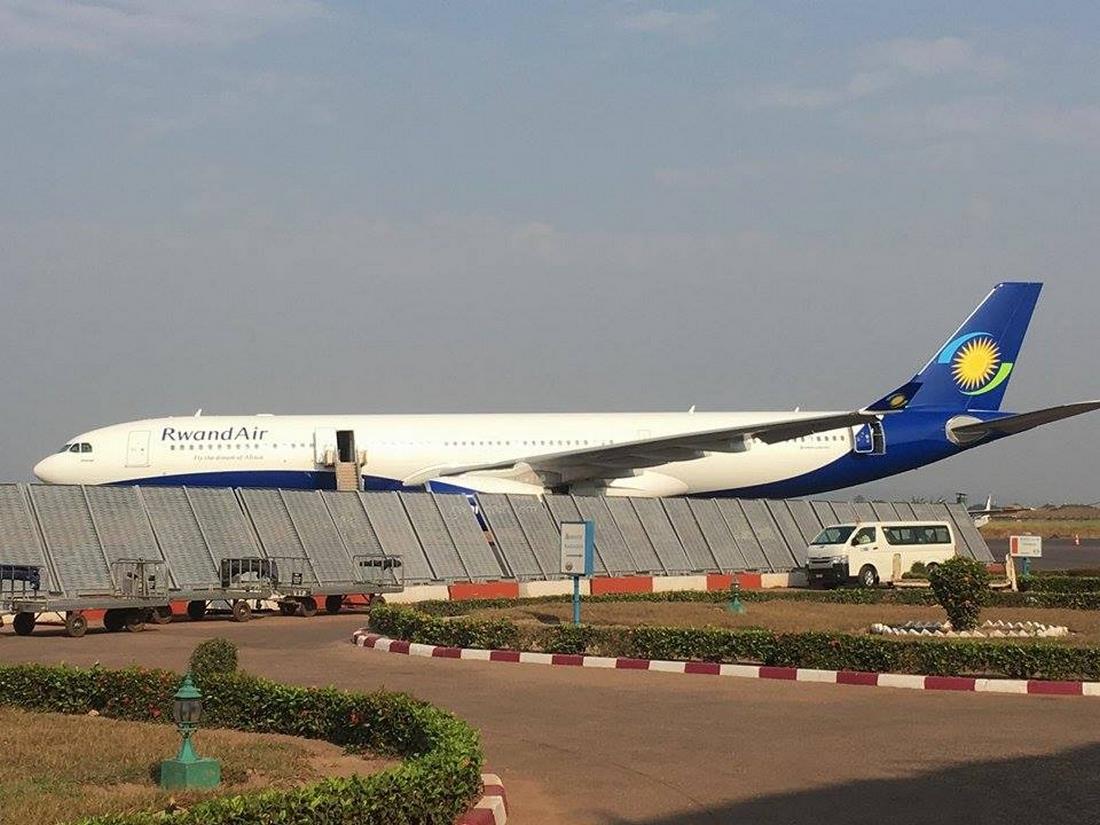 A little bite suprised to see once again this info. I was already not very optimistic for such flights, but now with the covid crisis.

USA is the biggest market for Rwanda outside Africa, ahead United Kingdom and India. And of course, RwandAir serves Kenya, Tanzania and South Africa which are big markets for USA. But i have doubt about the success for this route

If people are interested to get more infos about RwandAir (financial situations between 2016 and 2019 ), you can get maany infos from this document.

In deed RwandAir has made another request to the FAA, to serve New York, from Kigali via Accra (Ghana). RwandAir has already get its FAA Cat 1 few years ago. The airline can put its code share on flights to USA operated by another airline. Someone can confirm me, but i think that RwandAir A330s can also operate flights for an airline which serves USA.

Another meeting happened in 2019

Accra is served by RwandAir since 2013, 4 times a week via Abuja (Nigeria) mostly using B737s and sometimes the A330. This flights was previously operated by Lagos (Nigeria), during a few period the aircraft made a night stop at Accra.
Top

So, in brief, RwandAir applies to the US DOT to amend its foreign air carrier permit to enable the airline to provide scheduled and charter services to the US on the Kigali – Accra – New York JFK route with A330. The carrier also applied for authorisation to enter codeshare and/or wet lease arrangements with US or foreign air carriers.

Bad news for RwandAir, due to covid variants the airline will suspend all its flights to Southern Africa: Lusaka (Zimbabwe), Harare (Zimbabwe), Cape Town and Johannesburg (South Africa), from tomorrow.

Edit: ok i got my anwser. It was for maintenance. Algiers was probably a fuel stop between Kigali and PAD. Photos and Videos on PAD Aviation Technics FB page: https://www.facebook.com/PADAviationTechnics/

Otherwise the Tunisian spotters have could see yesterday a RwandAir B737-800 again the 9XR-WF at Monastir (Tunisia). He carried the Rwanda national basketball team, for qualifying matches of the African Basketball Championship

Note that the AS Kigali team played an African club cup soccer match in .... Sfax (Tunisia) today. But they took Turkish Airliens (Kigali-Istanbul-Tunis) and then surely the bus to Sfax. It is either Turkish Airlines or Qatar Airways when a Rwandan Team plays in Algeria, Morocco or Tunisia and sometimes RwandAir (special flight). They did not have the opportunity to test Egytpair
Top

Kigali ─23 February, 2021. RwandAir will become the first African airline to trial IATA Travel Pass to enable safe and seamless international travel. The airline will begin a three-week trial in April for customers travelling between Kigali and Nairobi in Kenya.

IATA Travel Pass is a digital platform to help passengers easily and securely verify that they comply with COVID 19 test or vaccine travel requirements, in turn giving governments the confidence to reopen borders.

Nairobi Kigali is one of the busiest lines of RwandAir (we still have to see how much Entebbe-Kigali, Johannesburg-Kigali, Dubai-Kigali do). Same for Kigali airport, since

Normally, RwandAir operates 3 flights a day (much less at the moment) including some via Entebbe (Uganda) ... to take traffic between Uganda and Kenya. At the time, it was mainly to take pax following the bankruptcy of Air Uganda.

Kenya Airways operates 3 to 4 flights per day in normal times (including their low cost subsidiary JamboJet). Less at the moment

In total it's 6 to 7 flights per day between Kigali and Nairobi (which is huge in Africa), so it makes sense to choose this line for the test
Top

Yesterday a RwandAir A330 (9XR-WP) once again operated a flight between Kigali and Amman. It happened several times since few years