Some updates regarding W20:

-VLC : 2 weekly as from Christmas holidays and as of 12FEB21
Best regards,

brabel wrote: ↑06 Oct 2020, 09:56 Flew SN to Rome this weekend.
Both flights LF over 90%.
On return flight to BRU yesterday, quite a lot of African destinations passengers

Really wonder how much money they are losing with this pandemic.

Air France said few days ago, that the 10bn euro bailout will keep Air France-KLM afloat less than year, if the passenger traffic remained at its current level. They needs to do "much more" to reduce costs in the face of the economic crisis. So probably more lays off, more route cuts,...

AF is burning 10millions EUR each day, less than 25 Millions during the lockdown, but it's still huge. (French) https://www.bfmtv.com/economie/les-reve ... 00182.html

And IATA has said, that some airlines could close: Airlines warn of more bankruptcies as wage support ends https://www.reuters.com/article/health- ... SKBN26R36D

I don't have any infos about SN, but if the current trend doesn't improve, probably the airline will need to take new measures.
Top

Brussels Airlines delays the resumption of its service from Brussels to Ljubljana until 15 February 2021.
André
ex Sabena #26567
Top

eurojet wrote: ↑24 Sep 2020, 11:17 As to the future of business travel. Our organisation is active in 120+ countries, with repo office in 15+. Myself, for 20 years, I have been flying weekly, either intra-Europe or Intercontinental. We are all grounded now since March, zero flights. We foresee nothing until maybe next summer. But then, we foresee T&E budget cuts by well over 80%. Virtual meetings have now been accepted as the norm, also for commercial interactions. Large industry conferences that used to attract 10K + participants all moved “virtual”. Somehow it works. I have no view how an organisation like SN is going to survive this, let alone the business hotel business. That part of the aviation business is not coming back any time soon.

I must admit I do not see a bright future neither... how long will airlines be able to survive on such low income. How long will civilians be willing to support airlines via government subsidies/loans. In my sector, we are having hard times at -25% revenue vs last year, let alone you are at -95% ... ! I saw a publicity campaign recently of SN on Facebook, low fares to Italy. All, but ALL comments were negative, in the sense of “pay my refund of my cancelled flights of June first, before I am even considering of booking a new flight, that might probably get cancelled as well..” Desperation is never good, but who sees any relief for this industry... ? Chances, opportunities that keep your fleet and staff busy ? OK, some cargo, but that won’t make up for the total loss, would it ? Before the confidence of the public is reinstated, a lot of water went to the sea... and airlines to the bottom of it ? ( sorry to be so negative...)

That’s why they barely post on Facebook. They get so many negative comment they don’t even know what to do except trying to reassure that they (try to) take care of each situation.
Top

Brussels Airlines A319 OO-SSD is on its way to Lourdes Tarbes, very likely for storage. The aircraft also made a test flight this morning, prior to being sent to Lourdes.

SSD is being returned to the lessor, who likely will store it in LDE.
Top

Think it was a long time we hadn't seen that many SN flights to Africa on the same day.

Where are the Brussels Airlines SSJ100s now?

According to an article in Simple Flying:

EI-FWD went into storage at CityJet facilities in Shannon, Ireland. It would eventually be given registration 9H-SJD and go to aircraft management services firm Seraph Aviation Group.

EI-FWE would also have the same fate as EI-FWD. Finding itself in storage in Shannon, Ireland, after its time with Brussels Airlines. It would then become 9H-SJE and also go to the Seraph Aviation Group. The same thing happened to EI-FWF, which was re-registered as 9H-SJF.

The fate of EI-FWG was a bit of a twist from its other three counterparts. The aircraft was stored in Venice, Italy, and would eventually become became 9H-SJI with Superjet International. It was set to fly with Slovenian flag carrier Adria Airways with registration S5-AFL, but this never occurred due to the airline’s collapse. The aircraft is now registered as I-PDVX and is listed as being with Superjet International.
André
ex Sabena #26567
Top

Situation is again very critical at SN, just the day after they announced heavy losses (233M €) for the first nine months of the year.

You can read Dieter Vranckx's interview in LLB here: 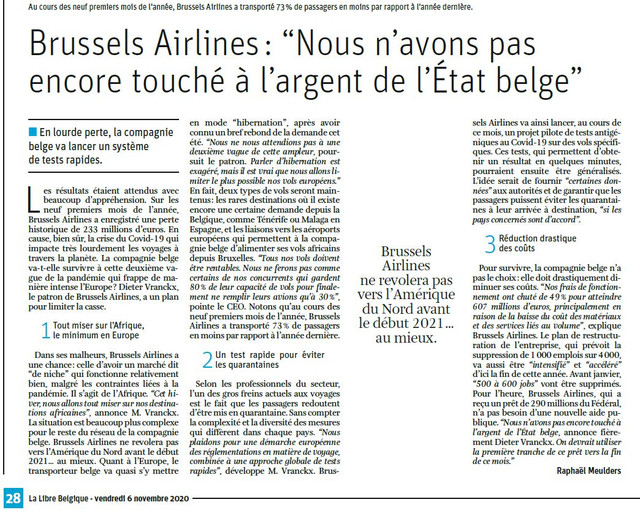 Brussels Airlines recently signed a contract with FLYdocs, extending their partnership for end-of-lease return services for an A330.
André
ex Sabena #26567
Top

Can only hope the load factors are OK.

Can only hope the load factors are OK.

There is even 7 actually if we count the Frankfurt-Windhoeck of Eurowings operated by SN.

Well as long as the belly is filled with cargo, passenger load factor is only the secondary concern

Certain flights to Africa are fully booked with cargo and pax.
Top

Fortunately. And that enables Brussels Airlines to pay for some advertisements in Oud Heverlee Leuven stadium during the Belgium-England game