Biggest regional routes (pax), in Africa are mostly in Eastern and Southern Africa
Biggest continental routes (pax) between Africa and rest of the World, are mainly from Africa to Middle East. No Brussels African route, in the top 10

. Kigali Entebbe is among the busiest routes in Africa, with over 120 000 pax per year, with 3 daily flights by RwandAir. Uganda Airlines will soon resume flights to Kigali, from December 2019 trafic will grow. I thought Kigali Nairobi was busiest. Kenya Airways operates between 2 and 3 flights a day, while RwandAir operates 3 flights a day and sonn the Kenya Airways Low cost JamboJet

Biggest hub in Africa (in term of connecvity) and biggest airports (pax and freight), it's not a suprise to see Johannesburg, Addis Ababa, Cairo, Casablanca and Nairobi. And they are big competitors for non African airlines

If an airline wants to serve Africa, go to East Africa or Southern Africa, then West and North Africa

Another analysis, interesting with the capacities proposed by the African companies, in Africa.

Ethiopian Airlines, South African Airways, Royal Air Maroc, Kenya Airways, RwandAir and Egyptair are the companies with the largest capacity on the African network. But there is big gap between the capacities on routes and the number of pax. On some routes, we have more than 500,000 seats in a year for traffic that runs between 100,000 and 200,000 pax per year.

The average load factor on flights in Africa is 60%

Brazzaville-Nouakchott, opeated by Mauritania Airlines is probably one of the longest flight in Africa, with 4 stops (Pointe Noire, Libreville, Cotonou & Bamako). How an airline can get profit with this ? Better to fly from Brazzaville to Nouakchott via Paris Cdg, with Air France.

Africa is a reputed market for having a high yield, but the load factor are too low. Low competition, no sky opening, high fees, very low intra-African trade, big restriction of visas, .... If we reached a 80% load factor on these routes, it will change a lot of things

I cannot resist publishing one picture of the anna.aero article mentioned by Rwandan-Flyer: 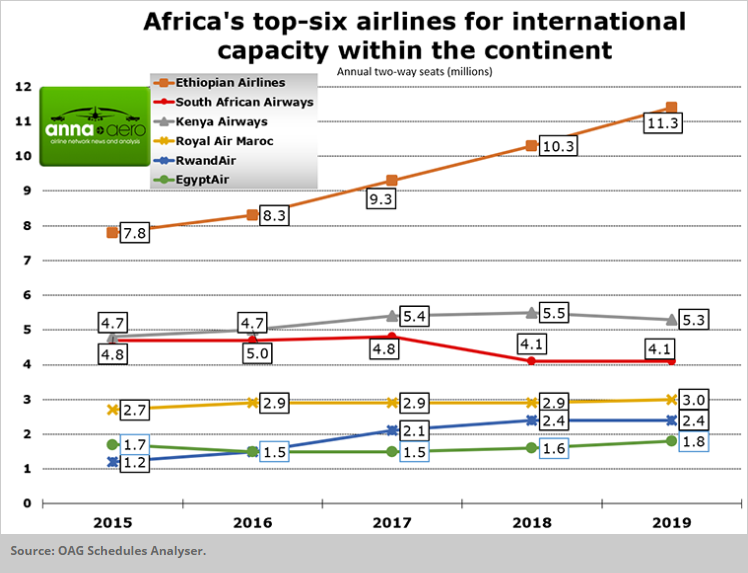 Brazzaville-Nouakchott, opeated by Mauritania Airlines is probably one of the longest flight in Africa, with 4 stops (Pointe Noire, Libreville, Cotonou & Bamako). How an airline can get profit with this ? Better to fly from Brazzaville to Nouakchott via Paris Cdg, with Air France.


This flights in my opinion are very useful here in Africa all this stops give the opportunity to fly between them .
For example the TAAG flight Luanda Brazzaville Bangui Douala Luanda.
Was very popular between those stops I use to fly every week Bangui Douala and it was almost full every time the tickets where expensive though.
Hasta la victoria siempre.
Top

This flights in my opinion are very useful here in Africa all this stops give the opportunity to fly between them .
For example the TAAG flight Luanda Brazzaville Bangui Douala Luanda.
Was very popular between those stops I use to fly every week Bangui Douala and it was almost full every time the tickets where expensive though.

In deed tag service in Africa are common sight. All airlines in Africa have tag service, even South African Airways (Johannesburg-Accra-Abidjan).
Top

It's possible to remove Q1 2019 and write only Air Transport in Africa Outlook, only, thanks

IATA has also updated its data, for Africa (not all unfortunately). As for Europe, the situation is deteriorating. The figures seem to be less impressive than in Europe, the traffic being lower.

The restart may take longer. Aviation in Africa, has many constraints that Europe does not have:

Low demand. The middle class is low in Africa, despite a population of 1 billion.
No open skies policy
Many restrictions for trade and visa (there is no such thing as an African Schengen)
Very low point-to-point traffic.

A typical Congolese living near the Tanzanian border will prefer the bus to go to Dar es Salaam (economic capital of Tanzania and one of the largest ports in Africa). It will go through Burundi or Rwanda. It will be longer (at least a day and a half, if there is not a mega traffic jam on the road due to an accident), but it will surely cost him less than taking Air Tanzania in Bujumbura or RwandAir in Kigali. Only Congolese businessmen or women, expatriates or humanitarian workers, can afford to fly. It doesn't make many people

Airlines were already in the red, before covid19
Africa has the highest fuel price in the world
A significant foreign workforce (American, French, Indian or British pilots). So a higher salary.
A poorly skilled local workforce, hence the recruitment of foreign staff
Huge investments to be made to upgrade infrastructure 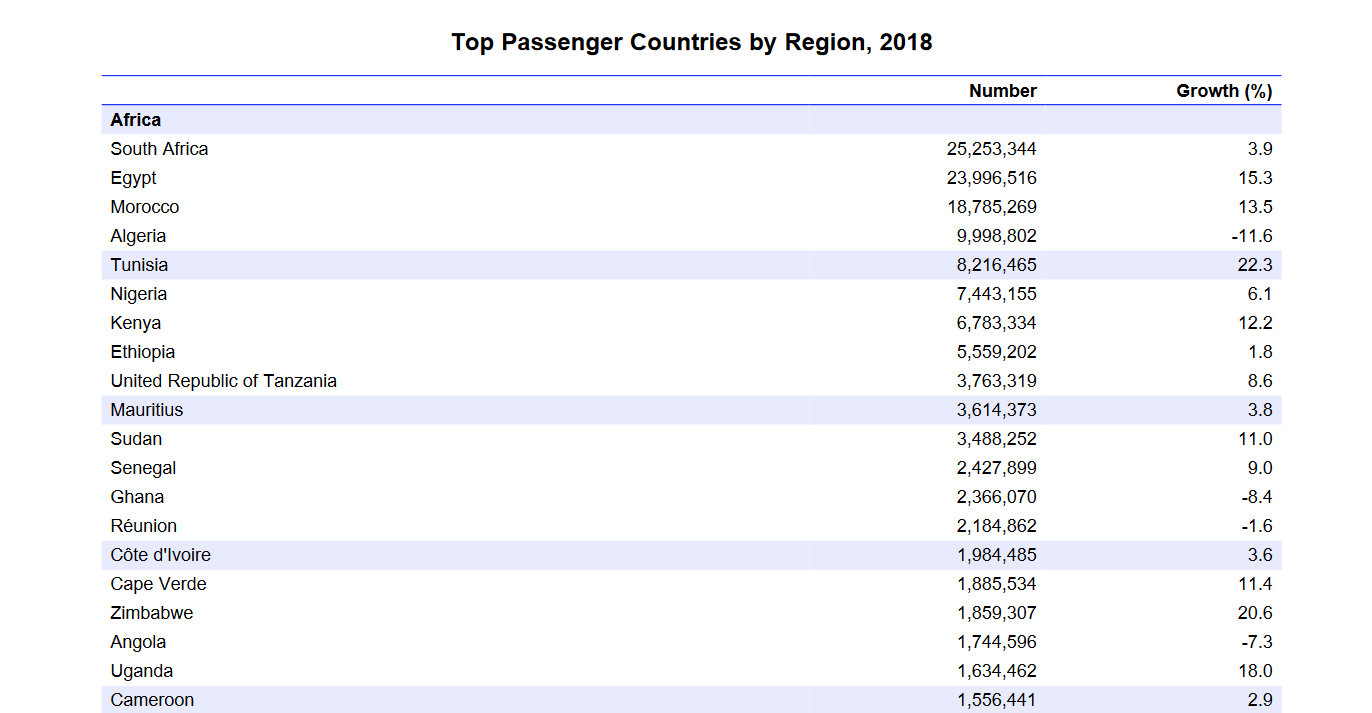 Re: Air Transport in Africa Outlook

Interesting report about the air transport in Africa. I didn't want to focus on stats (losses, pax traffic), but on connectivity between African countries. https://afraa.org/wp-content/uploads/20 ... _-2021.pdf

As I mentioned, it is the African market that will enable to African Airlines to be profitable, but countries have to make major reforms. Even though 2020 is a complicated year, the stats are worse than I thought:

Out of 54 countries only 13 countries are linked to at least 20 countries in Africa. On the graph below we see 11 countries. The other 2 are logically Senegal and Rwanda. Even some countries in Europe (France, Belgium, Spain, Portugal, Netherlands, United Kingdom, Switzerland, Germany, ...) are better connected to Africa than some African countries to each other ...

Here we are talking about countries. Some countries have secondary airports which are also connected to destinations in Africa 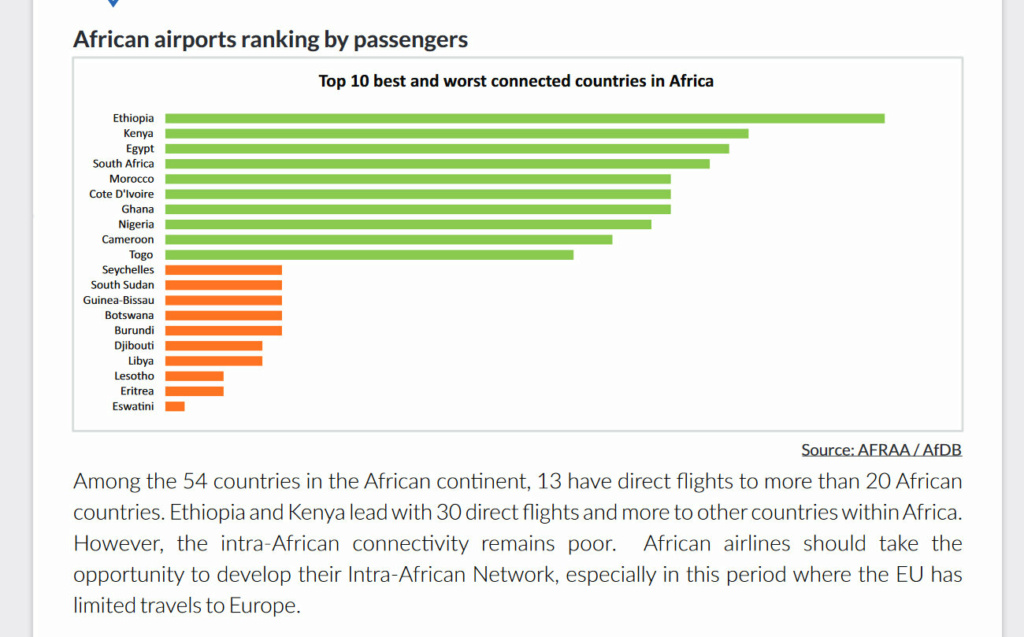 Here we are only talking about the network of an airport. The ranking is not too different compared to the countries: 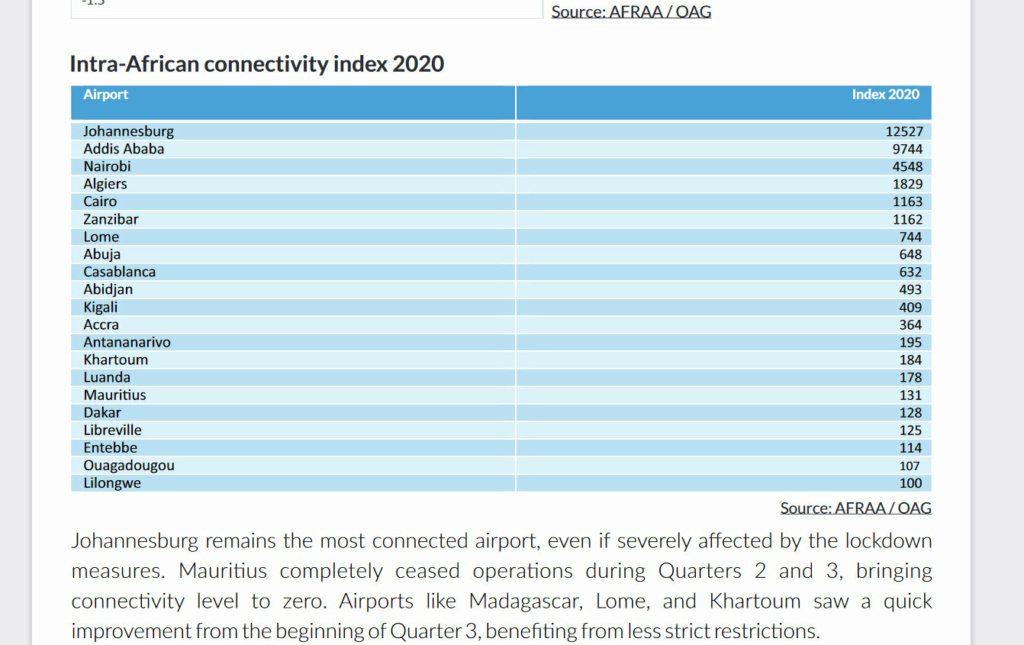 Inter connectivity between regions in Africa. Very complicated to travel from North to South or from East to West ....

One of the causes of these problems, the Visas. Half of Africans need a visa to travel in Africa (unimaginable in Europe) with high prices and a very high ticket price is added. People use the bus and taxi and planes are empties. Very long trips, due to poor infrastructure (insecurity in some regions) or traffic jams created by accidents and it sometimes takes days to clear the road.

And thus a business works slowly. For example, it takes more than 25 hours (at leas) for Rwandans living in Kigali to get to the Port of Mombasa by bus (not direct bus). Complicated if you want to import or export quickly.

"In terms of openness, more and more countries are opening their borders to other African countries.

According to the report, Visa on arrival is adopted by 32 countries across Africa.

“Unfortunately, in 2020, 46 per cent of Africans still need a visa to travel to another African country compared to 50 per cent in 2019, which is a small improvement.” 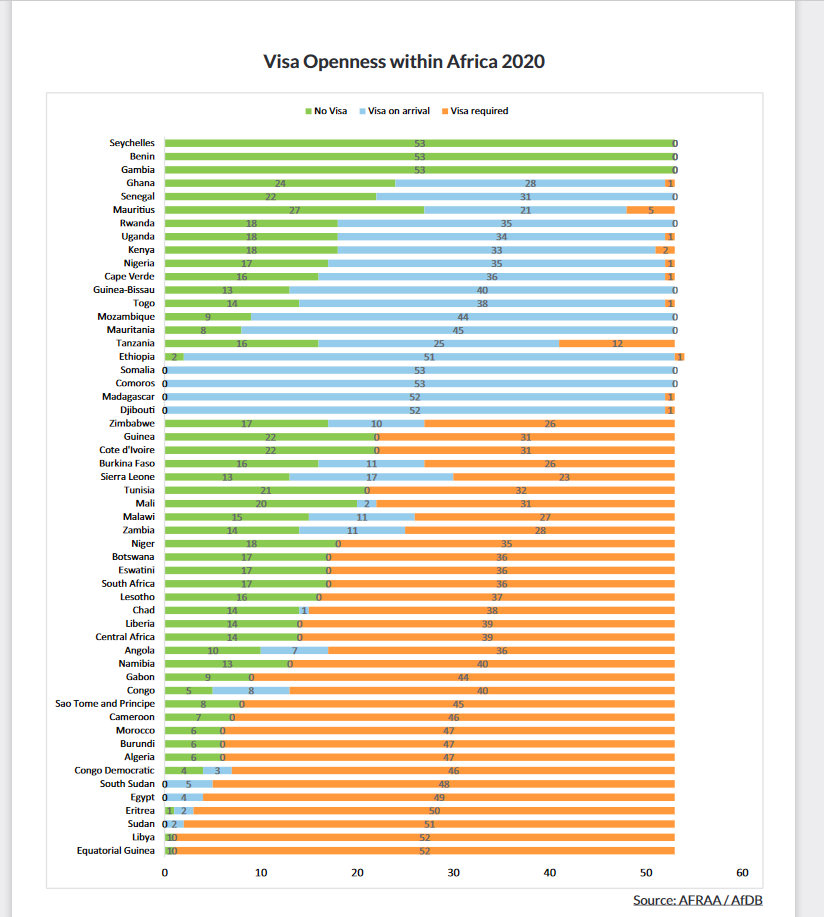