Virgin Galactic has planned for years to sell trips in which SpaceShipTwo transports passengers about 62 miles above Earth -- the beginning of outer space -- and let them experience a few minutes of weightlessness before returning to ground. Friday's test flight began in Mojave, California, the company said.

It's the second incident in a week involving the commercial space industry.

On Tuesday, an unmanned Antares rocket exploded just after takeoff off the coast of Virginia. Controllers deliberately destroyed the craft after it became apparent there was a problem, a spokesman for Orbital Sciences Corporation said Thursday.

Re: SpaceShipTwo has 'anomaly' in test flight

Photographer Ken Brown, who was covering the test flight, told NBC News that he saw an explosion high in the air and later came upon SpaceShipTwo debris scattered across a small area of the desert.
Top

And that's the probable end of virgin galactic
Top 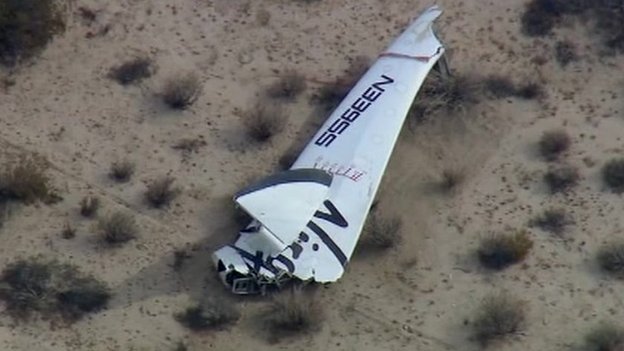 Ken Brown, a photographer who witnessed the crash, told the Associated Press news agency the craft exploded after it was released from the plane (White Knight 2) that carries it to a high altitude. White Knight Two landed safely.

About 200 people have already signed up for trips on SpaceShipTwo which cost about $200,000 per person. Not sure they will ever take off for their flight.
André
ex Sabena #26567
Top 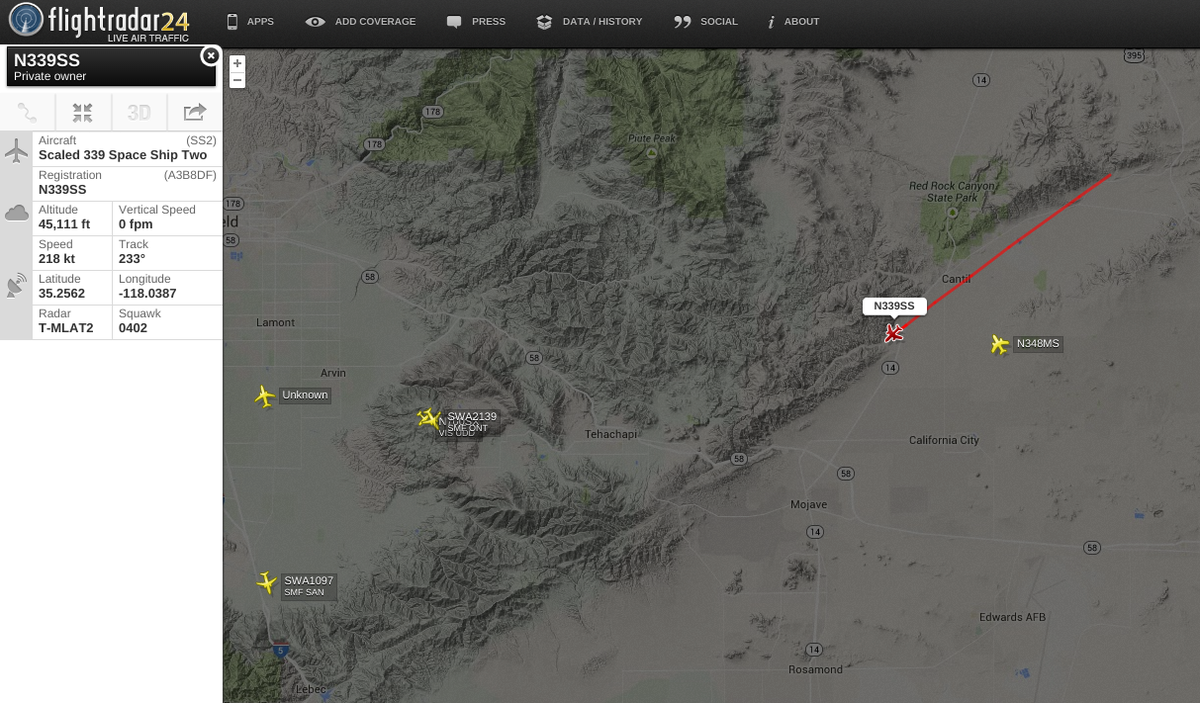 What a pitty: this looked like a very promising project!

Let's hope they figure out what went wrong and fix it.
Rip to the pilot/astronaut who lost his life.
Top

Richard Branson is also flying to Mojave right away to be with his team.
André
ex Sabena #26567
Top

That doesn't necessarily mean the end of the project.

It depends if the fault can be found and corrected. And how far in the development they were.

But it's a sad news indeed.
Top

That's not the filosofy of Sir Richard Branson


Sir Richard Branson has vowed to continue his space tourism venture despite the fatal crash of one of his craft in the California desert.

The accident as seen from the ground: 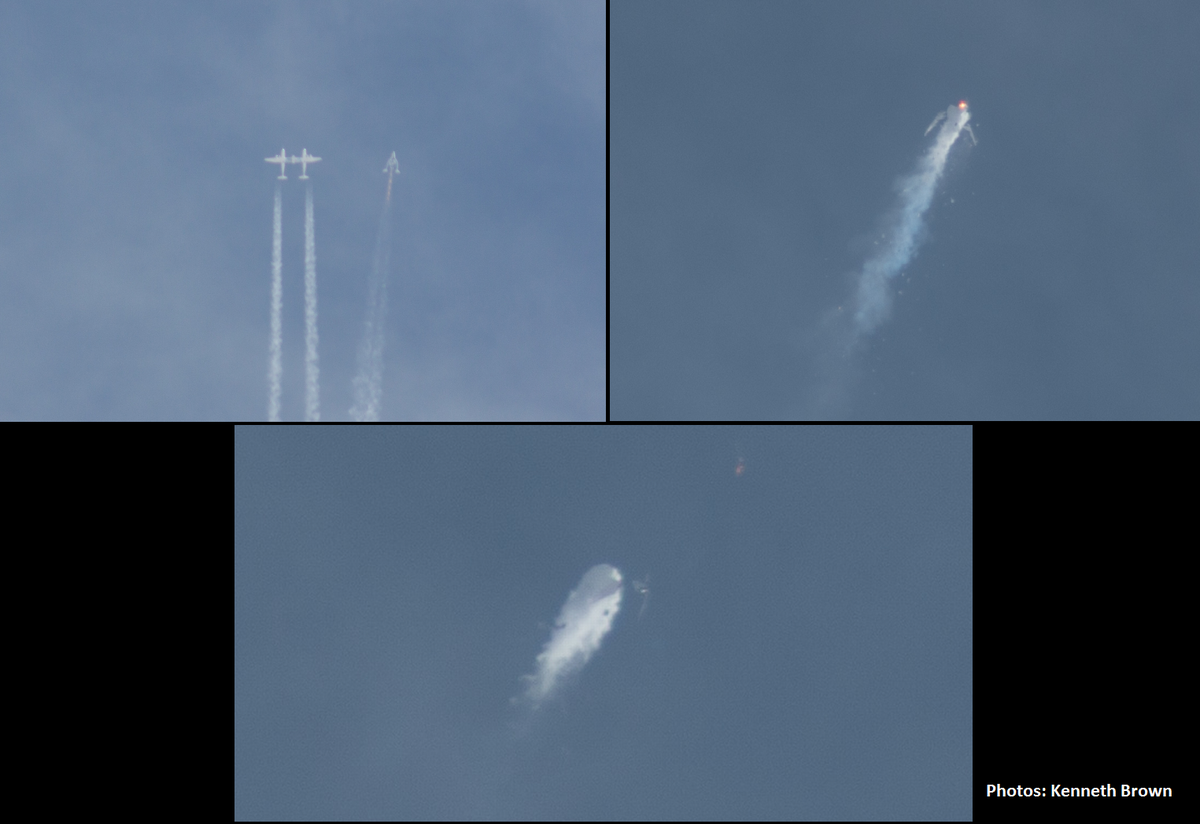 Above are three widely circulated ground photos of the moments before SpaceShipTwo broke up that may help us understand the disaster that destroyed it and killed one of its pilots earlier today.

The first photo was taken shortly after the rocket ride joy flight craft was dropped from its lifter aircraft WhiteKnightTwo. There is a massive plume of what looks like (but may not be) unburned fuel.

The next photo obscures Virgin Space Ship Enterprise behind a cloud of expanding vapour with a tiny glimpse of what might be flame. What may be a hint of flame atop the vapour cloud

This is followed by a breakup photo in which some large sections of the craft can be seen toward the bottom left of frame, including what seems to be one of the ‘shuttlecock’ movable booms intended to stabilise it as it hits the denser layers of the atmosphere on its way back to an unpowered gliding landing.

The structural failures doomed the vehicle.

Those who watched Stuart Witt, the CEO of Mojave Air and Space Port, at the first interview at Mojave after the crash, may have noted that he said he had been told he would see a different looking plume.

However he went on the say “From my eyes and my ears, I detected nothing.”

“I knew [something was wrong] when other things weren’t happening. It wasn’t cause something happened, it was something’s not happening.”

Could it be that sustained ignition of the engine was that ‘something’? If the new fuel formulation being test flown for the first time was rushing out of the rocket under high pressure it may have caused parts of the SpaceShipTwo structure to fail.

This is just speculation, but the photos are puzzling. The photos are credited to one Ken Brown on this site, and widely published without credit.

Too much fuel for too little fire?

In previous videos of brief rocket firings by this single SpaceShipTwo in the test fleet the vehicle is seen dropped some distance below the lifter WhiteKnightTwo before ignition. That ignition begins with a brief burst, then full ignition follows. The craft is then seen steaking away from WhiteKnightTwo for a short period and then climbing sharply upwards.

It appears that SpaceShipTwo didn’t achieve such vertical clearance from WhiteKnightTwo, which would be consistent with a brief rather than continued ignition of the rocket engine. The pre-crash photos show that the sub orbital spacecraft has pulled to one side of the heading of WhitKnightTwo.

If however the plastic based new fuel formulation continued to turn to gas in the fuel chamber faster than it was passing through the combustion chamber it might have ruptured the walls of the rocket fuel casing, causing the cloud of vapour as well as the catastrophic damage that was done to its control surfaces meaning it could no longer glide back to earth.

These speculations might be dismissed or further considered when the NTSB conducts its on site briefing sometime tomorrow (Sunday on the Asia Pacific side of the dateline) in Mojave.

Scaled test pilot Michael Alsbury, co-pilot of first flight of SpaceShipTwo, has been identified as deceased in crash. RIP Mike!


sn26567 wrote:About 200 people have already signed up for trips on SpaceShipTwo which cost about $200,000 per person. Not sure they will ever take off for their flight.

"Anybody who wants a refund will get one" says Richard Branson.

A team of between 13 and 15 NTSB investigators - including specialists in structures, systems, engines and vehicle performance - arrived in Mojave this Saturday morning and would begin on-site work later in the day.
André
ex Sabena #26567
Top

- There are 6 cameras on SpaceShipTwo, a range camera at Edwards Air Force Base, video from chase aircraft and over 1000 parameters of telemetry data to help find out what happened.

- The SpaceShipTwo accident debris field was about 5 miles long in a NE to SW orientation. FBI is assisting with documentation.

- We know that there was an in-flight separation but don't yet know what caused it.

- It is unclear how Siebold got out of spacecraft, his parachute was found deployed. Alsbury's wasn't. There is no ejection system on SpaceShipTwo.
André
ex Sabena #26567
Top

Press reports: Peter Siebold (43), the pilot who survived the crash because he parachuted to the ground, already spoke to doctors and to his family.

He's probably the best person to establish the cause of the crash.
Top

First observations of NTSB released by its acting director Hart:

- SpaceShipTwo's engine showed no sign of breach or burn-through.

- "Feather parameters were changed from lock to unlock" above Mach 1.0.

- Engine burn was nominal up until feather extension.

- Review of cockpit forward looking camera shows that the feather was unlocked by the copilot. 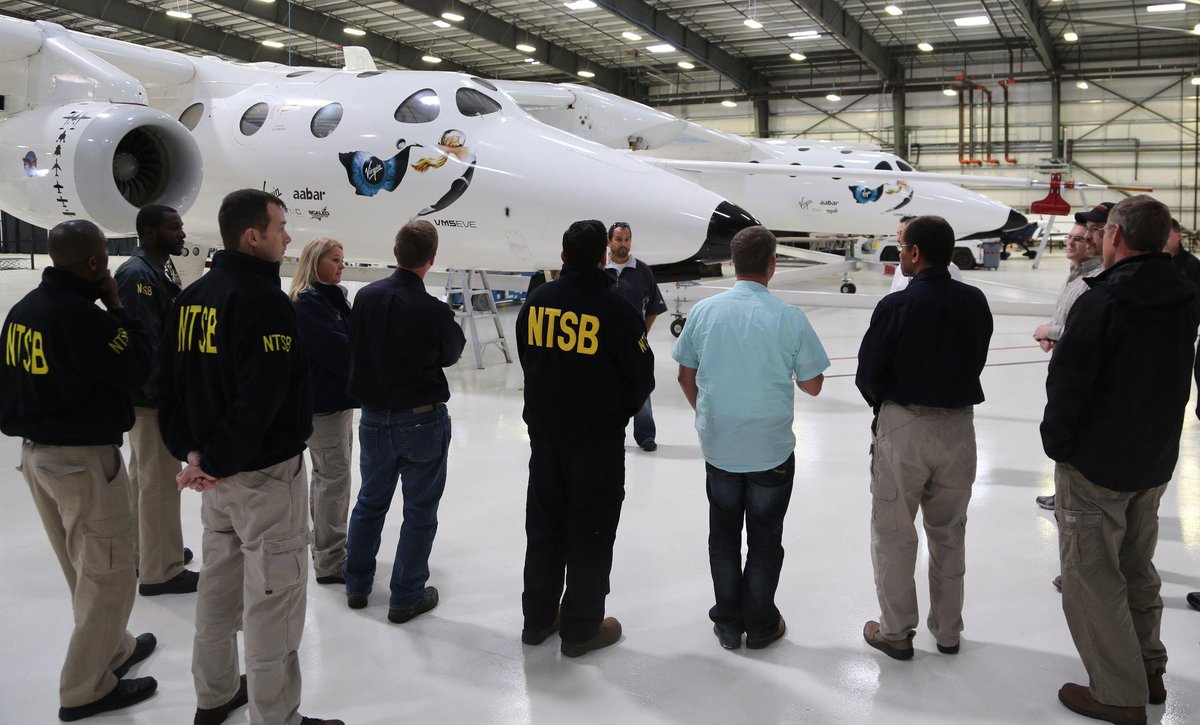 NTSB inspectors with the WhiteKnightTwo in Virgin Galactic's hangar in Mojave

The Washington Post has made a nice description with excellent graphics on what happened and what caused the crash.