Heightened travel risks stemming from the Nov. 13 attacks depressed flight bookings to the French capital and other destinations in the days after the attack for a number of European airlines.
"There was a softening of bookings for a week or 10-day period, we responded with 9 pound fares, 5 quid fares, 2 quid fares," Michael O'Leary told journalists in London.
A number of passengers failed to turn up for flights to Paris and Brussels, where authorities warned of a possible follow-on attack.
But unless there is another terrorist attack in Europe O'Leary said he saw no longer-term impact and Ryanair still expects to meet its target of 105 million passengers in its financial year, which ends on March 31.

Ryanair said plans to link its short-haul operations with long-haul routes are focused on Norwegian Air Shuttle ASA, Portugal’s TAP and an unidentified U.S. carrier after talks with Aer Lingus and Virgin Atlantic Airways failed to reach an agreement.

Negotiations on providing feeder traffic for trans-Atlantic services should produce a deal next summer, Chief Executive Officer Michael O’Leary said Tuesday in London, adding that discussions with IAG SA’s Aer Lingus foundered over the issue of which carrier should be responsible for missed connections.

http://www.bloomberg.com/news/articles/ ... talks-fail
IF IT AIN'T BOEING, I'M NOT GOING.
Top

Ryanair announced that it had launched High Court proceedings against both eDreams and Google to stop them misleading consumers by advertising non-existent Ryanair fares via the eDreams website and Google search adverts.
These practises are prohibited by consumer legislation. As a result, Ryanair has also put the Competition and Consumer Protection Commission on notice of the proceedings.
Screenscraper website eDreams has been allowed by Google to use the misleading subdomains “Ryanair Cheap Flights” and “www.Ryanair.eDreams.com”, and a copycat website with identical Ryanair branding, in order to deceive consumers into visiting the eDreams website, and booking with eDreams at inflated fares.

Yesterday Ryanair opened its new base at Milan Malpensa, its 15th Italian base and its 26th Italian airport, with one aircraft based and 4 new routes: Bucharest (4x per week), Comiso (daily), London Stansted (twice daily) and Seville (3x per week) 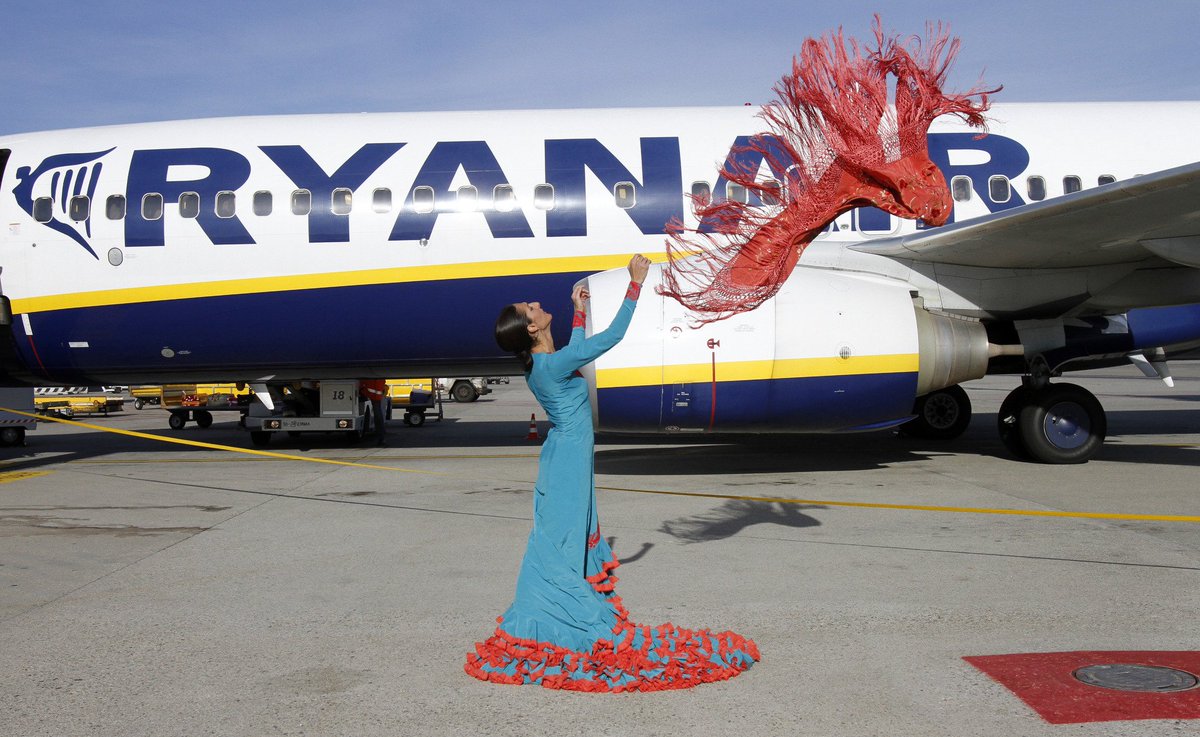 Ryanair CEO Michael O’Leary is optimistic that his carrier will strike a couple of short-haul feed agreements by next summer, although talks with Aer Lingus and Virgin Atlantic Airways have now ended.

“Talks are continuing with a number of carriers, but others have come to an end. We are still speaking with Norwegian, a US carrier which doesn’t want to be named and TAP Portugal,” O’Leary said at a London press briefing on Dec. 1, in response to a question from ATW.

For a change, a funny story:

A British judge disapproved the fact that a witness in his tribunal was not wearing a tie and told him to leave the witness box over his "Ryanair-style shirt".

With much humour Michael O'Leary replied "Hey Judge O'Donoghue, we always look our best! It's other airlines who need to smarten up and tie up their high fares! " together with a picture (the first I ever saw) of himself wearing a tie 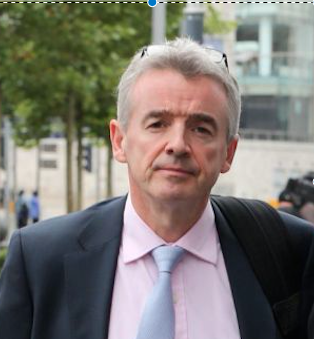 airazurxtror wrote:Thanks to an agreement that will be announced tomorrow, Ryanair will start operating flights to Castellón-Costa Azahar airfield. The airport was built at a cost of €150 million ($161 million) and inaugurated in March 2011, but since then its state-of-the-art metal clad terminal has yet to receive a single visitor or see a single aircraft land on its 3,000 meters of virgin runway. Ryanair is expected to announce that flights will begin between Castellón and destinations in Britain, Germany and Sweden.
http://www.thelocal.es/20150310/ryanair ... f-castelln
http://economia.elpais.com/economia/201 ... 27300.html
Castellon airport lies near the spanish mediterranean coast, due east of Madrid, about midway between Valencia and Tarragona.

airazurxtror wrote:Thanks to an agreement that will be announced tomorrow, Ryanair will start operating flights to Castellón-Costa Azahar airfield. The airport was built at a cost of €150 million ($161 million) and inaugurated in March 2011, but since then its state-of-the-art metal clad terminal has yet to receive a single visitor or see a single aircraft land on its 3,000 meters of virgin runway. Ryanair is expected to announce that flights will begin between Castellón and destinations in Britain, Germany and Sweden.
http://www.thelocal.es/20150310/ryanair ... f-castelln
http://economia.elpais.com/economia/201 ... 27300.html
Castellon airport lies near the spanish mediterranean coast, due east of Madrid, about midway between Valencia and Tarragona.

Vespasianus described this some 1.950 years ago: Vulpem pilum mutare, non mores. Een vos verliest zijn haren maar niet zijn streken. A fox may lose his hair but not his nature: El Confidencial reports that the 600.000 € state aid / regional support is invoiced as "publicity on Ryanair's website".

And what is the problem with that as long as it is in line with EU commission rules? Dont you think other airlines receive incentives to operate certain routes?

According to French financial newspaper La Tribune, Ryanair requested 21 daily slots at Paris CDG and received 15 of them. It is not yet sure Ryanair will use them.

Ryanair could soon propose flights from Luxembourg. Negotiations are under way between the LCC and the airport.

Ryanair is planning to add up to five new operating bases in Romania in a bid to challenge the dominance of other carriers and as part of its push eastwards that has been seen recently with its move into Israel.

At present Ryanair only flies to Bucharest, but it could add many based aircraft at the country’s airports, offering links across Europe.

This is a clear challenge to Wizz Air, Blue Air and Tarom, who dominate air services in Romania.

Michael O’Leary said in a press conference in Romania that he anticipates growing to a similar level to that which Ryanair has achieved in Poland, with four bases.

British police and German investigators have searched the headquarters of Brookfield Aviation International in Surrey (UK), the company is believed to supply half of Ryanair's pilots.

The raid is detailed in an exclusive report in The Times (London) - it is in connection with what a German court has described as an "especially serious case of tax evasion" while naming Brookfield directors James Duffield and David George as suspects.

The UK is chasing unpaid tax and social insurance payments of up to €65m - in Germany the offences that the company is being investigated for can result in jail sentences of up to five years.

It is suggested that Brookfield is a "letter company" which is controlled by Ryanair.

In Germany many of the Irish airline's pilots are registered with the UK agency Brookfield Aviation Limited - and they are self-employed according to Ryanair.

It is reported in the German media that the pilots wear Ryanair uniforms - they were obliged to be on-call 11 months of the year - and that they have no right to refuse shifts.

If they are found to be effectively full-time employees, the company could be required to back-pay unpaid insurance and state pension contribution payments.

Zoe Conway, a young Irish professional musician, was charged 280 € at Hahn Airport because she wanted to take her violin with her on board, and not check it in as luggage. The violin was Zoe's only hand luggage. Ryanair charged her a seat for the violin, but once onboard she was forced to place it in the overhead locker because it would not have been secure in the seat assigned to it.

Ryanair said their conditions of travelling with instruments are clear. In a statement, the airline said customers agree when they are booking a flight that instruments should be placed in the hold of the plane, or purchased a seat.

Hungarian competition authority Gazdasagi Versenyhivatal (GVH) has fined Ryanair 157.000 € for misleading passengers over its foreign exchange services. GVH claims Ryanair has been misleading consumers by falsely suggesting they would be 'better off' opting for its own foreign exchange service than using their respective banks. GVH also said that between February 2012 and October 2015, it had not properly made it clear to customers that they could opt out of Ryanair's foreign exchange service and use their bank's one instead. Customers were only made aware of this in a 'barely perceptible way' at the end of the booking process, it said.

Earlier this year, the GVH fined Ryanair just over 50.000 €, claiming it was misleading customers about ticket prices. GVH said the airline was failing to properly inform customers that there might be additional charges on top of the basic airfare, such as taxes, airport fees, service charges or baggage handling fees.

Ryanair said in a statement: "We have instructed our lawyers to appeal this ruling and have already made a number of changes to our website".

A 33-year-old Ryanair passenger, who claimed he was burned when boiling tea was spilled over his genitals and groin by a flight attendant, has settled a €38,000 damages claim against the airline in the Circuit Civil Court.

Ronald Furlong, of Esmonde Road, Enniscorthy, Co Wexford, claimed the incident happened as he was seated during a London to Dublin flight in August 2012.

He claimed the hot liquid spilled on and burned his abdomen, genital area, thighs and groin when a cabin crew member transferred the cup to another passenger.

He had suffered immediate pain and had to remove his clothes in the aisle of the plane. A dressing had been applied to his injuries and he had to sit on a temporary seat for the remainder of the flight.

Nis Airport in Serbia turned down both Ryanair and Montenegro Airlines which offered to launch flights to the city in return for subsidies.
André
ex Sabena #26567
Top

An appeal court in Bordeaux has ruled that Ryanair must reimburse 2.839.000 € it recieved from the Chambre de Commerce et de l’Industrie of Pau, operator of Pau-Pyrénées airport. The Bordeaux appeal court ruled the aid was “distorsion de concurrence”. Previously, the European Commission already said that the aid was distortion of competition.

airazurxtror wrote:The French government edicted a law against Ryanair to protect Air France, but MRS was not at all pleased with it, and the mayor of Marseille, Jean-Claude Gaudin, was dead against it. Ryanair is important to Marseille.

This is an article from 2010, thus long before Ryanair was condemned by a French court (twice actually). I'm pretty sure that the mayor of Marseille accepts the rule of law (= what a judge says, is more important then what O'Leary says).

As it turned out today ... the rule of law was exactly what O'Leary said