In addition to the thread about sales expectations that was launched three months ago (viewtopic.php?f=14&t=49989) I think it is necessary to open a new thread about the latest news of the show, daily events, actual aircraft sales, announcements of new models, etc.

The show has not yet started that lots of rumours are already filling the air.

In the Boeing 787 News topic, you have already read about the launch of the 787-10, with possible orders for some 100 aircraft from launch customers United, Singapore, British Airways and ALC Leasing, and maybe Qatar. And the 787-8 is set to fly every day at 3:30pm Paris time (Monday through Friday).

Airbus is set to win an order for more than 10 A380 airliners from leasing company Doric Asset Finance.

Bombardier will not show the CSeries, but a CRJ1000 NextGen on static display.
André
ex Sabena #26567
Top

Embraer will launch its second-generation E-Jet at the Paris Air Show today. This aircraft will be in direct competition with the Bombardier's CSeries in the 100-seat segment.

The first production A350, MSN006, is due to enter final assembly line at the end of this year, close to final test aircraft MSN005. MSN003 will be the next to fly at the beginning of October. Airbus will increase the production rate of the A350 to reach 3 aircraft per month between end-2013 and end-2014, and of course more afterwards.

Expert opinion is that the A350 will make its full public debut at the opening day of the Paris Air Show today, with at least one simple pass down the flight line at an agreed height. Actual flight time between Toulouse and Le Bourget is less than one hour with a sortie to the show well within the scope of the flight test programme and not putting any pressures on the certification schedule.

We'll see... (there are currently thunderstorms over Paris).

One confirmation: the largest Airbus customer ILFC orders 50 more A320neo aircraft, taking total to 150. Said ILFC CEO H. Courpron: "one of the most attractive aspects of the A320neo is that it offers a choice of engines".

Another confirmation: Airbus firmed up a previously announced deal with Lufthansa. 100 more A320 family aircraft (70 A320neos and 30 regular A320s) will sport their famous colours!

Launch customer Air New Zealand got its first A320 equipped with sharklets delivered at the Paris Air Show.

Boeing of course could not remain silent in face of the success of Airbus. Said CEO Conner: "Not only will we maintain our wide-body lead, we intend to grow it" with the 777X and the 787-10X.

And about the badly selling 747-8: "The 747-8 is an incredible machine. Passenger feedback has been exceptional. We are looking to sell even more." That's the least he could say in an attempt to re-launch sales.

TUI has formally signed its order for 60 Boeing 737MAX, with an option for 60 more, at the Paris Air Show.

Boeing also announced that Skymark Airlines intends to renew its fleet with the 737MAX.

Mitsubishi says it will start final assembly of its MRJ within the next two months, and confident of first flight by year end.
André
ex Sabena #26567
Top

Another confirmation: Doric Lease Corp. signs a Memorandum of Understanding for 20 (not 10) Airbus A380 aircraft. A big push that was badly needed in the run to profitability. Said Doric's M. Lapidus: "The economics of the A380 are unbeatable. If anything, we may be under-ordering this aircraft".

Doric Lease Corp. already has A380s flying with Emirates. Today's MoU for 20 more aircraft could open door to new operators of the jet. 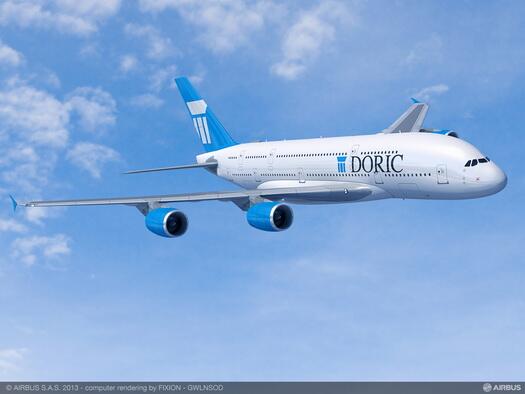 (Since Doric is a leasing company, it is unlikely that this livery will ever be painted on an aircraft)
André
ex Sabena #26567
Top

GECAS now also commits to order 10 787-10X Dreamliners, subject to programme launch. But the launch should not be in doubt now...

Bombardier Aerospace disclosed today that a previously announced firm order for 10 CS100 aircraft was placed by Odyssey Airlines, a new airline that intends to operate from London City Airport.

Nice start for the new E-Jets:

As expected, the BA A380 has made a first display flight (delayed by bad weather conditions). 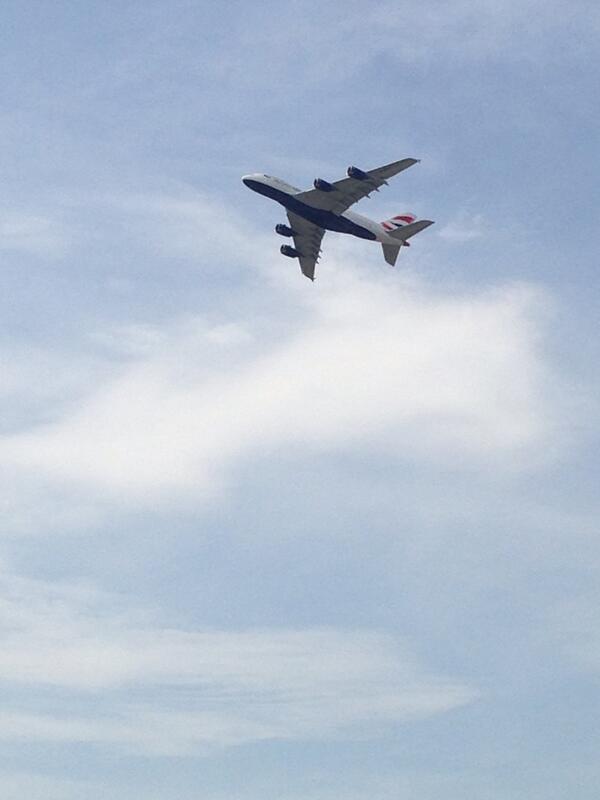 Earlier, the A400M had opened the display flights together with the Patrouille de France. 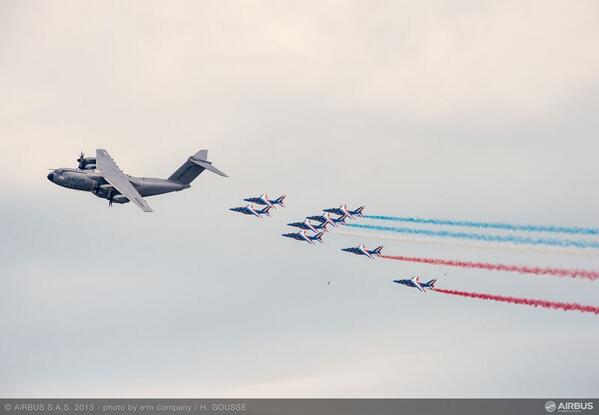 A 787 in Air India colours also took part in the first day of flying display. 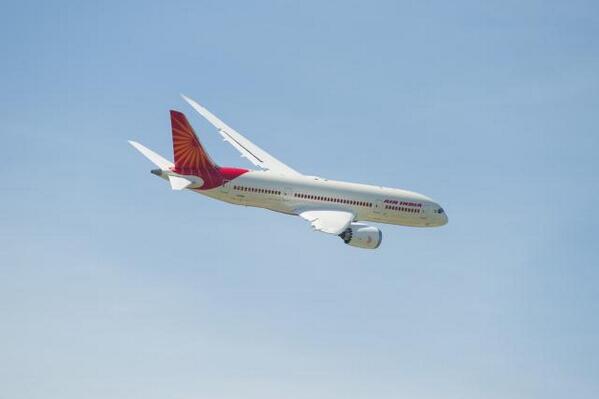 sn26567 wrote:Mitsubishi says it will start final assembly of its MRJ within the next two months, and confident of first flight by year end.

They have been saying that for years now. It's time to get their act together and start producing the aircraft.
Embraer is catching up.

Good move of Embraer to stretch the E195.

There's a pic circulating showing off a GECAS B787-10X model. It looks like a B753, very gorgeous.
Top

Maybe/probably not for this week anymore, but Qatar Airways says they want to convert their 30 options for the 787 into firm orders. But they are not really interested in the 787-10X because of their high amount of A350 orders. Probably they'll order 30 787-9's. They asked Boeing for production slots, but they don't want them to be too late.

They also said they would like to be launch customer of the 777-9X. Prefering the A350-1000 over the 777-8X (for which they see a market with airlines like Emirates, but not for them), they want the bigger new 777 version due to it's capacity and expected performance.

They also repeated they may buy extra A330's (including freighters), but at the appropriate price as it's getting "a little bit vintage" with the A350.

A latest news item for the first day: TUI Travel CEO Peter Long has indicated he is likely to firm up options for 90 Boeing 737 MAXs following on from its recent commitment for 60 of the type.

And finally a short summary of the flight display of Day 1, with some stunning images (except that they forgot the BA A380

A day of rain and thunder followed by almost 30 degrees temperatures and one of the best c/s on the A380 so far:

Financial results of the opening day: Airbus brings in orders worth $18.3bn (thanks mainly to the 20 A380s ordered by Doric), tripling Boeing's $6.1bn.

A small piece of news that might make many people (like me) happy: the Boeing 777X will be getting bigger windows (in addition to its folding wingtips)!

We are expecting the Boeing 787-10X launch this morning: one more hour before we can drop the X ?

easyJet confirms order for 35 A320ceo (to be delivered in 2015-2017) and 100 A320neo (2017-2022) with options for another 100 A320neo jets. According to easyJet, thr deal enables it to manage a fleet of between 165 and 298 jets in 2022, depending on economic conditions and opportunities. Under the initial plan, 85 of the 135 ordered jets will be used to replace ageing aircraft as they leave the fleet and return to lessors. Said easyJet CEO: "Airbus offered us the best deal, and at a price with a greater discount to the list price than in 2002"

WOW! This one is a huge order!!! Everything for LH or also for Germanwings, Swiss, Austrian airlines and... brussels airlines?!
Top