Lufthansa had its moment, this is EK and EY their moment at 'their' local airshow, after which LH will probably follow with firming up their order, but that may be even for after the show.
Top

Hi,
Better move this to the DUBAI AIRSHOW TOPIC...
Besides no info about the b777X for now what this topic is about..
Could be completely wrong and orders for the B748i

Lufthansa had its moment, this is EK and EY their moment at 'their' local airshow, after which LH will probably follow with firming up their order, but that may be even for after the show.

In addition to that, my original post was based on airliners.net in this case and actually it's not exactly that sure EK and EY will have a joint-launch (as was the case in Paris with the 787-10). It could be EK and EY having seperate announcements.


cathay belgium wrote: Better move this to the DUBAI AIRSHOW TOPIC...
Besides no info about the b777X for now what this topic is about..
Could be completely wrong and orders for the B748i

It will not be wrong in this case, except that Etihad may also announce additional deals (going from more 787's to A350 to A320neo). So yes this could be in the Dubai Air Show topic, but I rather prefer to keep that topic clean with firmed announcements instead of mix of 'rumours' and real announcements (to keep a clear overview).
Top

Nov. 22 (Bloomberg) -- United Continental Holdings Inc. is interested in Boeing Co.’s new 777 planes to bolster long-range flying as it braces for increased competition from Middle Eastern carriers such as Emirates, said Chief Financial Officer John Rainey. “We’re going to look at it. We haven’t made a decision,” Rainey said yesterday in an interview at The Year Ahead: 2014, a two-day conference in Chicago hosted by Bloomberg LP.
The three biggest Gulf carriers, including Qatar Airways Ltd. and Etihad Airways PJSC, underscored their ambition to dominate long-haul flying by ordering 225 of Boeing’s 777X jets at this week’s Dubai Airshow. United’s Star Alliance partner Deutsche Lufthansa AG is buying another 34 of the jets, the largest twin-engine aircraft designed by Chicago-based Boeing.
United, the largest U.S. operator of Boeing’s 787 Dreamliner, is studying the benefits it would gain with the newest 777, Rainey said. An order isn’t assured as Chicago-based United carefully manages its capital demands given the 292 jets already on order, Rainey said. United has ruled out Airbus’s A380, a double-decker capable of seating more than 500 passengers, as “really too big” for its needs, he said.
Top

Dec. 20 (Bloomberg) -- Cathay Pacific Airways Ltd., Asia’s biggest international carrier, agreed to order 21 Boeing Co. 777X jets valued $7.5 billion, betting on the newest twin-aisle offering from the U.S. planemaker to modernize its fleet.
Cathay chose the -9X version of the plane and expects to take delivery from 2021 to 2024, the Hong Kong-based airline said in a statement today. Carriers get discounts on list prices and the planes will be used to serve destinations in North America and Europe, Cathay said.
Chief Executive John Slosar has been pushing to retire the airline’s older 747-400 jumbo jet fleet and replace it with more fuel-efficient and modern aircraft as competition for business travelers increases with Emirates. The order is a boost for the 777X, unveiled last month by the Chicago-based planemaker and central to its efforts to keep a lead in the lucrative wide-body market over European rival Airbus SAS.
“The Boeing aircraft will replenish and expand the fleet capacity,” Cathay said in the statement.
Top

One of the expected early orders, but still nice to see it 'confirmed'.
Btw, in the youtube video of the 777X of Boeing, they have a certain part about the global connections, showing a map of the world. Three hubs are written larger than the other destinations: Frankfurt, Dubai (in the way of the three MEB3 hubs I suppose) and Hong Kong... It's such a marginal detail, but as Cathay already expressed their huge interest and the rumours that they would be an early customer, it was already a very small confirmation of what would be comming.

July 9 (Bloomberg) -- Emirates, the largest airline by international traffic, signed off on an order for 150 Boeing Co. 777X planes worth $56 billion at list prices to renew and extend what is already the world’s largest wide-body fleet.
The deal for 115 400-seat 777-9Xs and 35 smaller 777-8Xs firms up a commitment announced last year and comes with an option for 50 more aircraft taking its value to $75 billion, Dubai-based Emirates said in a joint statement with Boeing.
“The 777X will offer us operational flexibility in terms of range, more passenger capacity and fuel efficiency,” Emirates President Tim Clark said in the release. The first aircraft are due for delivery in 2020, he said.
The largest single order in aviation history positions Emirates as lead operator of the first twin-jet able to haul a jumbo’s payload, aided by a revamp with new General Electric Co. engines and Boeing’s largest-ever wing. The Gulf carrier, the No. 1 operator of both the current generation 777 and Airbus Group NV A380 superjumbo, is splurging on capacity as it builds Dubai into the leading hub for long-haul transfer flights.
The 777X order was initially announced at the Dubai Air Show in November, and is being firmed up days before next week’s Farnborough expo in the U.K. Emirates has finalized its order with Chicago-based Boeing
less than a month after scrapping a deal with European rival Airbus for 70 A350 wide-body planes valued at $16 billion.
Top

But the news fits in this thread as well.
André
ex Sabena #26567
Top

Do you like the sardine feeling? Boeing (and the airlines) are canning more and more people in the current 777. How will it be in the 777X? 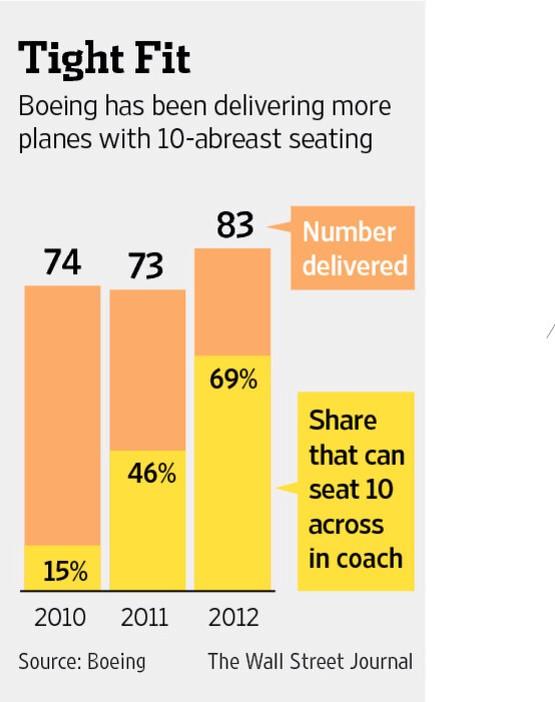 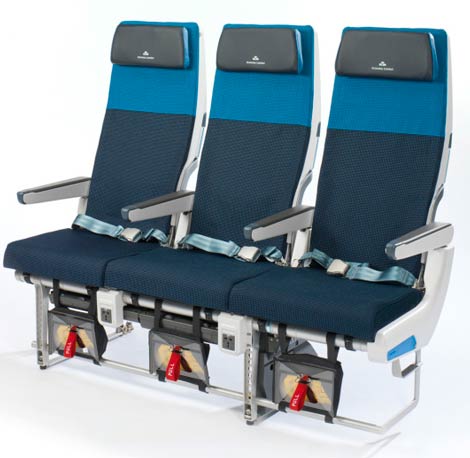 sn26567 wrote:Do you like the sardine feeling? Boeing (and the airlines) are canning more and more people in the current 777. How will it be in the 777X?

It will be an improvement for the 77W's because they already had 10-abreast and these new seats will offer slightly more leg room and better IFE. These slimline seats of Recaro for long haul are not as uncomfortable as these for short haul, so that shouldn't be much of an issue.
For the 777-200ER fleet on the other hand it will be a decrease in comfort because they go from 9 abreast to 10 abreast and that slight increase in leg room doesn't make it that much better (KLM's leg room is not great anyway in Economy).

Some 777(X) (planned) order updates. It also includes a few other planned orders of the same carriers, but not worth placing this in 3 different topics.

Lufthansa/Swiss confirmed that they will order an additional 3 B777-300ER's for Swiss, this brings the total of 77W's on order for Swiss to 9. They also confirmed that they will introduce Premium Economy in these aircraft after the successful introduction of this class on Lufthansa's fleet. Swiss will receive its first 77W in 2016.
In addition Lufthansa ordered an additional 6 A320's for Eurowings after already ordering 10 (the rest will be sourced from within Lufthansa or other sources). Lufthansa also confirmed that MUC will be its first A350 base by the end of 2016.
http://www.ch-aviation.com/portal/news/ ... -eurowings

Eva Air has decided to go with the 777X and 787-10 for their widebody fleet replacement plans, after also considering the A350-1000 and A330neo. As well as the 777F to replace its cargo fleet of 747's. The first phase includes 5 B77F's to replace its fleet of 8 747's. A second and a third phase concerns orders for "at least" 10 787-10's and an undisclosed number of 777X aircraft (of which the -9 version is the most likely to be ordered).
Concerning narrowbody Eva Air said they might order 5 A321neo's to complement its current fleet of 12 A321ceo's. Earlier this year Eva Air said they are considering both the A320neo and 737MAX for their future narrowbody fleet plans.
http://www.ch-aviation.com/portal/news/ ... et-renewal

As a third update, it is said that TUI AG is considering the B777-300ER for Corsair. There have been talks about this type for a long time already, but now that the talks with Air Caraïbes for a take-over from TUI failed, it is said to be back on the table. It would concern 3-4 77W's to replace its current fleet of 7 aircraft (including 3 high density 744's with 533 seats). It's not known if these would be new or not, but I think it's quite a sure thing that the 77W is a perfect 744 replacement for Corsair. The 77W in its highest density configuration might be even less comfortable, but comes very close to the seatcount of their current 744's but in a much more efficient way.
http://www.ch-aviation.com/portal/news/ ... et-renewal
Top

Boeing is proposing to stretch its largest B777 — dubbed B777-10X — to create a twin-engine behemoth to rival struggling A380. Proposed aircraft would carry above 450 passengers.
André
ex Sabena #26567
Top

sn26567 wrote:Boeing is proposing to stretch its largest B777 — dubbed B777-10X — to create a twin-engine behemoth to rival struggling A380. Proposed aircraft would carry above 450 passengers.

Not surprisingly, the main focus here is on Emirates, and to convince them to pick the 777-10X over the A380.

Boeing Said to Mull Stretching 777 to Knock Out Airbus A380
(Bloomberg) -- Boeing Co. is proposing to stretch its largest 777 model to create a twin-engine behemoth aimed at delivering a knock-out blow to Airbus Group SE’s struggling A380 superjumbo, said people familiar with its plans. The U.S. planemaker has approached several carriers about the plane it calls the 777-10X, including Dubai-based Emirates, the world’s largest operator of both Boeing’s 777 and Airbus’s double-decker aircraft, said the people, who asked not to be identified because talks are private.

The proposed model would carry about 450 travelers, sharpening its rivalry with the A380, two of the people said. To do so, Boeing would stretch the frame of its 777-9 to squeeze in about four extra rows of seats. The -9, whose debut is slated for decade’s end, will be the first twin-engine model to encroach on jumbo territory by hauling more than 400 passengers.“We are always evaluating technologies, airplane configurations and market needs,” said Doug Alder, a Boeing spokesman. “While no decisions have been made, we will continue to study 777X derivatives and seek customer input to develop products that provide the most value for customers.”

An Emirates spokeswoman said that the world’s biggest international airline is in “regular contact” with both Boeing and Airbus about current and future fleet requirements.

While Emirates has reviewed the new 777 variant, it isn’t sold on the concept, said a person familiar with the talks. The carrier has ordered 289 jets from Boeing’s 777 family, including 150 of the upgraded versions known as the 777X. Boeing unsuccessfully pitched Emirates on its 747-8 jumbo two years ago as a potential A380 replacement. The U.S. manufacturer is angling to take advantage of uncertainty over the future of the A380, and any strain in Airbus’s relationship with Emirates.

While the Gulf carrier, which has taken 80 A380s and last month ordered two more, lifting its backlog to 64, has been pressing the European planemaker to upgrade the model to bolster fuel savings, Airbus has been reluctant to make the multibillion-dollar investment for essentially one customer. Tim Clark, president of Emirates, told Bloomberg earlier this month that talks with Airbus to enhance the A380 with new engines had lapsed. “My main concern is that they stop producing the plane,” he said. The airline’s A380s seat between 489 and 615 passengers, according to its website.
Top

Lufthansa is considering stretching out deliveries of its B777Xs on order, concerned about the cost and size of the jet.

A decision could be reached by September 2017, and may include taking additional A350s instead.
André
ex Sabena #26567
Top
Post Reply
129 posts