The first A321neo test aircraft (D-AVXB) suffered a tail strike during landing at Perpignan and is AOG for several weeks. Airbus expects that this incident will delay the certification campaign by a few weeks. Bad luck!
André
ex Sabena #26567
Top

It seems the aircraft repositionned to Toulouse tonight:
https://www.flightradar24.com/data/airplanes/d-avxb/
Top

IndiGo (India) is expected to be the second carrier to receive the A320neo.

Airbus plans to fulfil its 2016 delivery target for the airliner, with numbers picking up in the second half of 2016.
André
ex Sabena #26567
Top

Qatar Airways threatened to cancel an order with Pratt & Whitney (US) for engines powering the 50 A320neos it has on order, saying the newly developed powerplants had “a lot of problems”.

Qatar Airways will seek compensation for the delays in delivery of its A320neo, as the carrier expects a “very huge” delay before receiving the first A320neo.
André
ex Sabena #26567
Top

The aircraft rolled out without further incident but was unable to continue its test schedule due to the damage received.
[...]
The occurrence aircraft was able to ferry to Toulouse on Feb 15th 2016 where the repairs will be done.
André
ex Sabena #26567
Top

sn26567 wrote:The first A321neo test aircraft (D-AVXB) suffered a tail strike during landing at Perpignan and is AOG for several weeks. Airbus expects that this incident will delay the certification campaign by a few weeks. Bad luck!

A spotter happened to be there. THE picture of the tail strike: 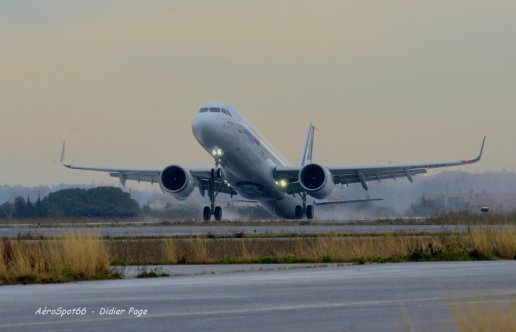 Here D-AVXB is towed towards the EAS facilities in Toulouse for repair: 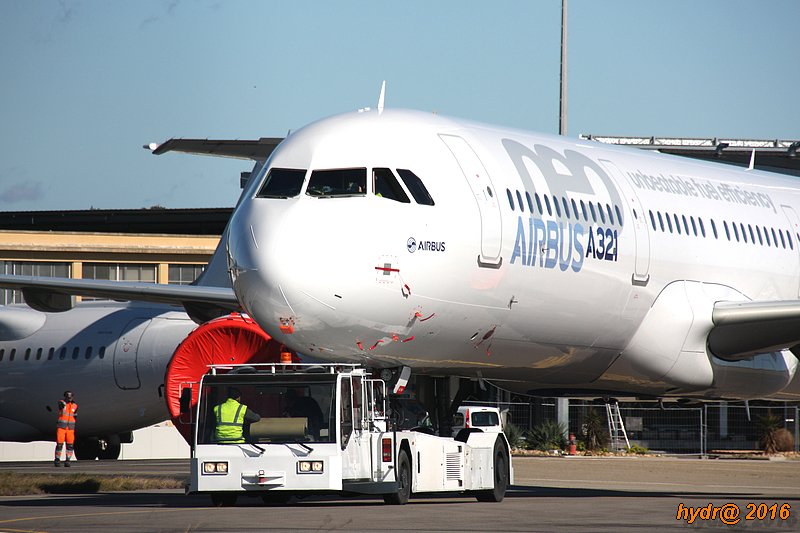 
Think you mean EAS Industries in Perpignan no?
This is a heavy Mx / Paint / conversion shop that used to be run by a former Sabena Technics guy.

I should have read your post just above André.

She did indeed fly back to TLS afterwards so not anymore AOG in PGF.

The first A320 assembled in Mobile, Alabama is coming out of the U.S. Manufacturing plant, ready for painting 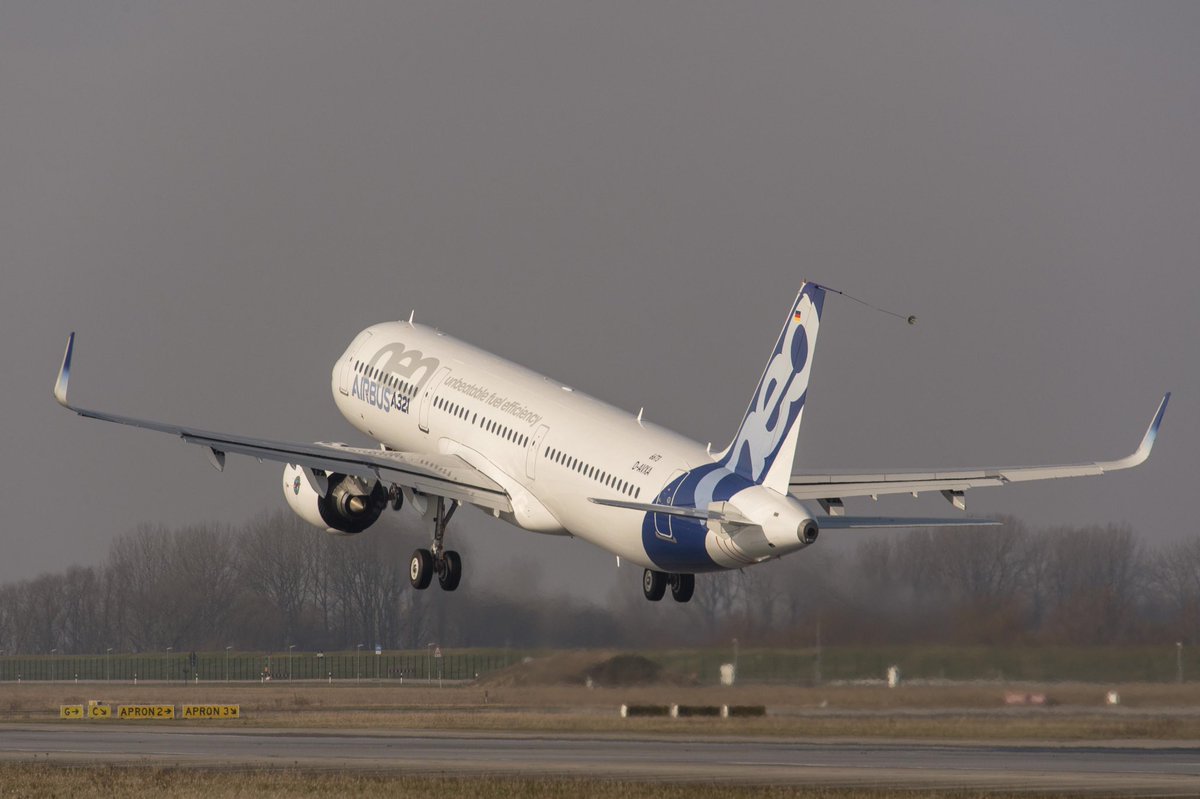 Reaction to the new Lufthansa A320neo layout, including two more rows of seats and the Space-Flex v2 galley/lav combo, has been impressively loud and negative. While the forward half of the plane offers a smidgen more space for business class passengers, the back of the fuselage – where the SpaceFlex kit makes its mark – sees the opposite effect. Reduced pitch, limited overhead bin space and no windows in the last row create a confluence of #PaxEx pain.

As part of a scheduled conference to discuss their 2015 operating results, Lufthansa’s CEO Carsten Spohr has suggested that Lufthansa will not accept additional A320neo until a known engine bug is resolved.

Earlier this year, LH took delivery of their first A320neo and put it into service even as a relatively minor issue existed with the Pratt and Whitney that is available as an option on the aircraft. The issue itself is relatively minor. In order for the engine to reach operating temperature and tolerances, it must first warm up for approximately 5 minutes before throttle can be applied so that the aircraft can move under its own power. This creates nothing more than a minor inconvenience at the gate at departure. Pratt and Whitney is working on a solution and they expect engines delivered beginning this June to no longer have this issue and will retrofit existing engines to correct the issue.

In the mean time, LH’s decision is to delay the 4 other A320neo aircraft set to be delivered this year until the issue is resolved. The one A320neo that is in service is operating as expecting, with the engines experiencing 99% reliability and the aircraft is delivering a 20% decrease in operating costs compared to the previous generation of A320 aircraft.

The Gulf airline could walk away from between four and six aircraft orders that have yet to be delivered after problems affected the A320s hydraulics and software, Akbar al-Baker told reporters at a media roundtable in Dubai.

Baker criticized U.S engine maker Pratt & Whitney last month, saying the engines it supplied for the A320neo were inadequately tested for the high temperatures experienced in the Gulf region.

"They have indicated they will have all those fixes by the end of the year," Baker said of Airbus on Monday.

"We have talked to Airbus, they know very well that we're a very unhappy, very unhappy customer."

Baker said it could turn to the Boeing 737NG as a replacement, noting the U.S. aircraft maker was "trying to oblige and give us the aircraft that we require".

Airbus on its side said it is halving the production rate of the A320neo due to the P&W engine issues, until these problems are solved.
André
ex Sabena #26567
Top

Airbus is facing a second category of technical problems with some of its family of A320neo aircraft on top of previously reported P&W engine glitches. Problems are related to the hydraulic systems and particularly an increased noise created by a hydraulic pump when taxiing on one engine.
André
ex Sabena #26567
Top

Airbus is reportedly curtailing output of the A320neo until July 2016 to slow inventory buildup, as Pratt & Whitney works on a fix to eliminate the most severe issues with the PW1100G engine.

Today Qatar Airways' CEO Akbar Al Baker made it clear in a CNN interview that his company was hurt by Airbus due to the delay in the delivery of ordered A320 Neos. The Qatar Airways chief said his company grew 5 percent less because of the delay.

Qatar Airways could cancel a $6.4 billion order with the Airbus Group if issues with the European plane maker’s A320neo are not resolved by this summer.

The Middle East’s second largest airline was supposed to be the launch carrier for Airbus’ new A320 model but refused to take delivery in December over engine cooling issues. It is now deciding whether it should scrap the order for 80 A320neos and opt for just as many Boeing 737 aircraft.

A decision on whether to cancel the order and to take the 737s instead will be made by the summer.
André
ex Sabena #26567
Top

Indeed they can but with Boeing they will be back in the end of the line receiving them even much much later !

Aer Lingus is looking at potentially replacing its fleet of B757s with between four and eight A321LRs for transatlantic operations.

Qatar Airways cancelled its first A320neo and remains at an impasse with Airbus over delays in deliveries caused by engine problems. Carrier plans to soon start talks with CFM. Qatar Airways is also still waiting for deliveries of three A350s since February 2016, with 10 expected to be delivered in 2016.
André
ex Sabena #26567
Top
Post Reply
195 posts