cnc wrote: no the audit for the A380 came back negative.
my guess is DL even though i can't believe any US airline would order an A380 in the next 5 years

If United is not planning to order (or evaluating) the A380 anymore, I don't see a possible candidate in the first years either... Delta doesn't seem in a widebody-order-mood (they only have the 788 on order, inherited from Northwest, but they pushed back that order until 2020, when they are asked about it, they always say they believe there's still enough life left in their current long haul fleet) and I don't see American ordering the A380...they just introduced the 77W (with which I don't say these can be compared, just to say that's their biggest aircraft at the moment, they just introduced it and it's still far away from the A380 based on capacity).
Top

maybe the NEW American?
Visit my flights on: http://www.quixoticguide.com
Top

When I mentioned I talked about new and old American. It's not because they merge with US, they suddenly need the A380. Yes they could probably use them on some routes, but enough to justify a new subfleet? I'm not sure, I don't think so. They can probably do it as well with a larger 77W-fleet (and maybe in the future the larger 777-9X).

It could be Delta or American, but I don't see none of these as such immediate A380 clients. But that's just my opinion.
Top

If European airlines can fly A380s to the US cities, it is obvious that there is a market. Why can't American airlines (I don't mean AA) try to also tap that market?

As an example, there is no need for hourly flights by a Boeing 767 or 777 between LHR and JFK. AA and BA could instead send an A380 every two hours on the busiest transatlantic route.
André
ex Sabena #26567
Top

Of course they COULD, but it's the question if these airlines feel the need for a A380 subfleet. From the big-3 I only heard United commenting they evaluate the A380 (and apperently that evaluation was negative).
So my initial question actually was, which airline could Airbus be pointing at? Still United or Delta and/or American?


sn26567 wrote: As an example, there is no need for hourly flights by a Boeing 767 or 777 between LHR and JFK. AA and BA could instead send an A380 every two hours on the busiest transatlantic route.

I don't think that's such a good example. British Airways will already get the A380 and it's really not in BA/AA's advantage to reduce frequency on that route. Their close to shuttle service between these two cities is their biggest strength on the transatlantic market. You can't get more flexibility than that. Additional growth can be catched up by using bigger aircraft (currently it's a mix of 772, 77W and 747, so they can go bigger with more 77W's comming in for both BA and AA, and A380's for BA).
Last edited by RoMax on 15 Mar 2013, 00:36, edited 1 time in total.
Top

As an example, there is no need for hourly flights by a Boeing 767 or 777 between LHR and JFK. AA and BA could instead send an A380 every two hours on the busiest transatlantic route.

They have the slots for a hourly flights so they will use them.

As an example, there is no need for hourly flights by a Boeing 767 or 777 between LHR and JFK. AA and BA could instead send an A380 every two hours on the busiest transatlantic route.

US airlines tend to fly american pax while european airlines fly europeans!
americans demand frequency, europeans much less so american airlines prefere to fly smaller aircraft at a higher frequency.
both UA and DL could deploy the A380 on the NRT route but its a very expensive plane and not all the seats are needed year round
Top

The European Aviation Safety Agency (EASA) says it is close to releasing an airworthiness directive (AD) approving and mandating the permanent full-life fix for the cracking problem affecting Airbus A380 wing-rib brackets.

The AD is for the permanent retrofit of both in-service A380s and those currently on the final assembly line (FAL). Airbus also indicates that the AD is “imminent” and that it already received EASA certification for the full-life, permanent retrofit for the A380 wing ribs several months ago.

At the end of 2012 the airframer and selected MRO providers started retrofitting the in-service and FAL aircraft with the permanent modification.

Lufthansa Technik is carrying out the permanent wing feet repairs on one of Lufthansa’s A380s at its Frankfurt facility; that the retrofit takes 40 to 50 days.

The MRO division of the Lufthansa Group has contracts to perform the permanent retrofits on 31 A380s: 10 from Lufthansa’s fleet, 12 for Qantas and nine for Emirates Airline.

KLM Engineering & Maintenance says it may perform permanent retrofits on Air France’s A380; until now, the temporary wing repairs of Air France’s fleet have been mostly handed over to Airbus.

Airbus started production of the first all-new wings with ribs and feet made from “7010” aluminum at the end of 2012, and it expects to receive EASA certification for the permanent modification in the second quarter.

A long awaited moment: rolling out the first fully painted A380 for British Airways (MSN95) at Hamburg Finkenwerder (that's also the destination of the next Luchtzak AvGeeks trip): 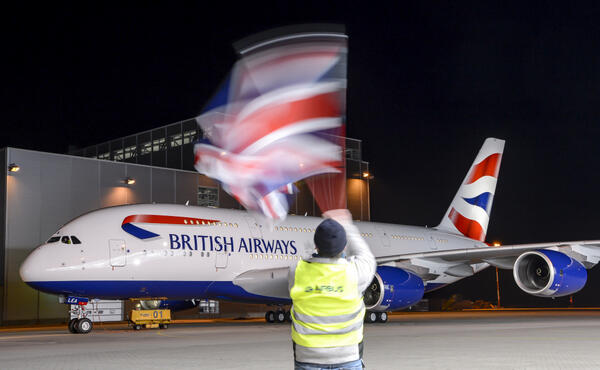 Indeed, it is one of the nicest color schemes on an A380 so far

BA livery is the most finest on this one!
Now give it some intra european bookable routes !!
Wanna fly that thing!

I thought the blue bits of the BA livery were much darker, or is that just the camera?
Top

Air France is reportedly in talks with Airbus Industrie about deferring the delivery of the carrier's pending order of four A380-800s by several months, to allow the loss-making operator time to return to profit and cut debt by €2billion by the end of 2014.

An Air France-KLM spokeswoman said "the airline was finalising talks with Airbus to delay delivery of its ninth A380 until September this year from an unspecified date and its 10th until April 2014 from 2013." The other two, due in 2014, would come at an unspecified later date.

Talks with the European aircraft manufacturer and Rolls-Royce apropos the airline's US$7 billion order for twenty-five wide-bodied A350-900 jets are still ongoing. Last year, the Franco-Dutch carrier cancelled an option "which could no longer be extended" to buy an A380-800 and again postponed the delivery of one B777-300(ER) by a year. Other deferrals include three Airbus A320-200s and another B777-300(ER).

I'm definitely a fan of the British Airways A380 - looks great! I posted some photos of the aircraft being painted in BA's red, white and blue on my blog. Here is one of them: 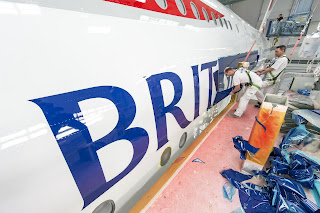 It took 24 painters a total of two weeks at Airbus’ Hamburg hangar to apply five coats of paint!
Last edited by theaviationwriter on 16 Apr 2013, 05:11, edited 1 time in total.
http://www.theaviationwriter.com
Also on Facebook and Twitter
Top

EASA to give green light to Airbus A380 wing repairs

The European Aviation Safety Agency (EASA) said today it would give formal approval to repairs designed to eliminate potential wing cracks on the Airbus A380.

A draft directive means aircraft being retrofitted with newly designed wing components will no longer be subject to a special regime of checks.

From the first quarter of 2014, Airbus will deliver A380s incorporating modified wing designs, removing the need for retrofitting planes in service or on the production line.

Turkish Airlines would consider buying the Airbus Industrie A380-800 and A350 wide-body aircraft provided the aircraft manufacturer comes up with "good opportunities", chairman Hamdi Topcu said. While Airbus CEO Fabrice Bregier said he believed the Turkish carrier would "eventually" order the A380, the Turks have kept mum on their future intentions, adding simply that the airline has what "it needs until 2020" with any final purchase plans to be finalized "towards the end of the year."

Turkish Airlines recently finalized a deal with Airbus for the purchase of up to 117 medium range classic and next generation A320/A321 aircraft.

Here's your first look at the Qatar Airways A380! Yesterday, Airbus issued a nice photograph taken from its Hamburg facility, which showed the vertical tail section of airline's superjumbo. More details on my blog, here: http://www.theaviationwriter.com/2013/0 ... qatar.html 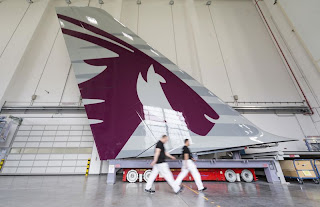 The A380 on the same dangerous slope as the 747-8? EADS CFO Wilhelm says that there are delivery positions for the A380 in 2015 (the year the programme is supposed to break even) that need to be filled. (as a reminder, Boeing already decided to reduce the 747-8 output).

Painting of the British Airways A380