When confirmed, a sale would boost backlog for 787-10 version
Longest version of plane seen as crucial for program profit

(Bloomberg) --
Boeing Co.’s stretched version of the 787 Dreamliner, whose sales have slowed since its 2013 unveiling, is getting a boost as Taiwan’s EVA Airways Corp. adds the plane in a wide-body deal valued at more than $8 billion.

EVA plans to take 24 of the 787-10 models and two 777-300ERs, Boeing said Thursday in announcing the carrier’s intentions, which aren’t yet a firm purchase. The airline settled on the Dreamliner after considering a competing Airbus Group SE model, the A350.

The transaction underscores customers’ interest in the -10, the longest and newest of three Dreamliner models, after the lull that followed the initial flurry of orders. Only three fresh orders have come in since 2013. Boeing’s backlog of 146 jets for the -10 is only about 13 percent of the tally so far for the Dreamliner, the world’s first jetliner built chiefly of composite materials.

The Seattle Times asks the question of whether the 787 programme will ever be profitable for Boeing. There are now 300 Dreamliners delivered and flying all over the world, but during the second quarter of this year Boeing sill lost $25 million on every 787 produced. Boeing hopes that by the end of this year it will make a slight profit on the 787 and begins the slow climb out of a deep financial hole that already totals $32 billion. Boeing hopes to break even in 6 years (after building 1300 planes), but that's already two years later than projected two years ago. Some analysts doubt Boeing will ever make a profit on the 787.

I think it's not unreasonable to think they will never really earn money with the 787 program, unless they can keep it running for a long time with upgraded versions etc. However there is more in it than just they money they can earn on this program itself, the 787 brought them a lot of knowledge, experience, etc. that they are already using in other development programs and saves them money overthere (in terms of development of innovations, experience on "how not to do it" which is invaluable

Well we heard that on the 767 tanker program, its something like 1.5 billion in the red (some of our money most of it Boeings).

One issue was wire separation, apparently clearly in the specs and totally missed.

You do have to wonder under current management approach if they won't just keep lurching from one mess to the next.

Workforce being split up and fired in one place, hired back in another (if they go and don't join one of the supplier that treats them better).

All entities should be at the build site, not scattered all over the country.
Top

RC20 wrote:Well we heard that on the 767 tanker program, its something like 1.5 billion in the red.

That's another story! Not only is Boeing late, but the costs are likely to climb even more. If the U.S. Air Force had confirmed its initial choice of a reliable existing aircraft, the A330MRTT, they would have had their tankers by now, and another large Airbus plant in the U.S.

RC20 wrote:Well we heard that on the 767 tanker program, its something like 1.5 billion in the red.

That's another story! Not only is Boeing late, but the costs are likely to climb even more. If the U.S. Air Force had confirmed its initial choice of a reliable existing aircraft, the A330MRTT, they would have had their tankers by now, and another large Airbus plant in the U.S.

But this is off topic...


The 767 Tanker problem is an example of a pretty simple program mismanaged. They have shook up who runs and oversees things as it should not have happened.

You should note thought the US was not buying off the shelf MRTs. It was a specific US aircraft and Airbus had problems with the Australian type and only recently got it fully capable of doing its mission

they also had to build the plant in Alabama and get production going. You don't just grab 18 aircraft off the other production lines, those are already committed (sold) to someone else.

Airbus would have had its own challenges and may well have had other or identical issue with the wiring problems, they are new the business.

Boeing is not and should have been able to execute far better.
Top

A Royal Brunei Airlines Boeing 787-800, registration V8-DLB performing flight BI-684 from Manila (Philippines) to Bandar Seri Begawan (Brunei) was climbing out of Manila when the crew stopped the climb at FL280 reported the left hand engine (Trent 1000) had failed and was shut down. The aircraft returned to Manila for a safe landing.
...
On Oct 28th 2015 the airline reported that while preparing the change of the left hand engine a boroscopic inspection of both engines confirmed, that BOTH engines had sustained similiar damage.
...
The airline wrote: "Rolls Royce has conducted a detailed boroscope inspection of both engines as part of preparations to replace the affected engine, with a spare which has already been transported to MNL from BWN. However, in recent hours information has been conveyed to the airline by Rolls Royce that the second on wing engine on this aircraft has itself being the subject of similar damage. The boroscope inspection has now revealed evidence of damage to a number of blades on both engines, for reasons which are as yet unknown. At this point, there is no evidence that an external event such as a bird strike has caused this damage to both engines. Efforts to establish the cause of the damage by Rolls Royce are continuing, fully supported by the RB Engineering team."
...
The airline continued that as result of this finding all Dreamliners in their fleet are to undergo boroscopic inspections now, too, causing "very severe" disruptions of flight schedule in the coming days.

Most of the Boeing 787s delivered to date contain a software defect that, in at least five identified aircraft, have erroneously reported their location to controllers, prompting two air traffic management agencies to put the Dreamliner on a “blacklist” for certain services.

Although it denies the software defect creates a safety hazard, Boeing says a service bulletin with instructions for operators to correct the position reporting error will be released “imminently”.

The retrofits are expected to be installed across the fleet through 2016, but Boeing has no control over if or when an operator chooses to implement a voluntary service bulletin, the company says. New 787s delivered from Boeing’s assembly lines are already equipped with software that corrects the original defect.

The 787 software problem drove Canada’s air traffic control organisation Nav Canada last year to “blacklist” all 71 787s that were then using the country’s airspace. The blacklisting means the 787s are not allowed to use reduced separation procedures offered to other aircraft equipped with ADS-B.

Airservices Australia considered a similar limitation for the 787 fleet last year because of the same software problem, but the consequences would have been more severe. Unlike Canada, Australia mandates that all aircraft above 29,000ft must have ADS-B transponders.

The first 787 ever to be sent to the desert: PrivatAir N887BA is at Victorville for storage. 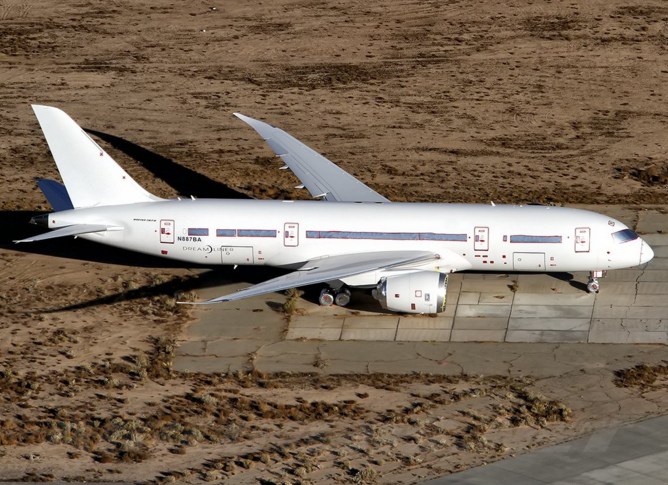 The manufacturer of the Boeing 787's dimmable window (one of the most visible novelties of the aircraft) has developed a much darker version: 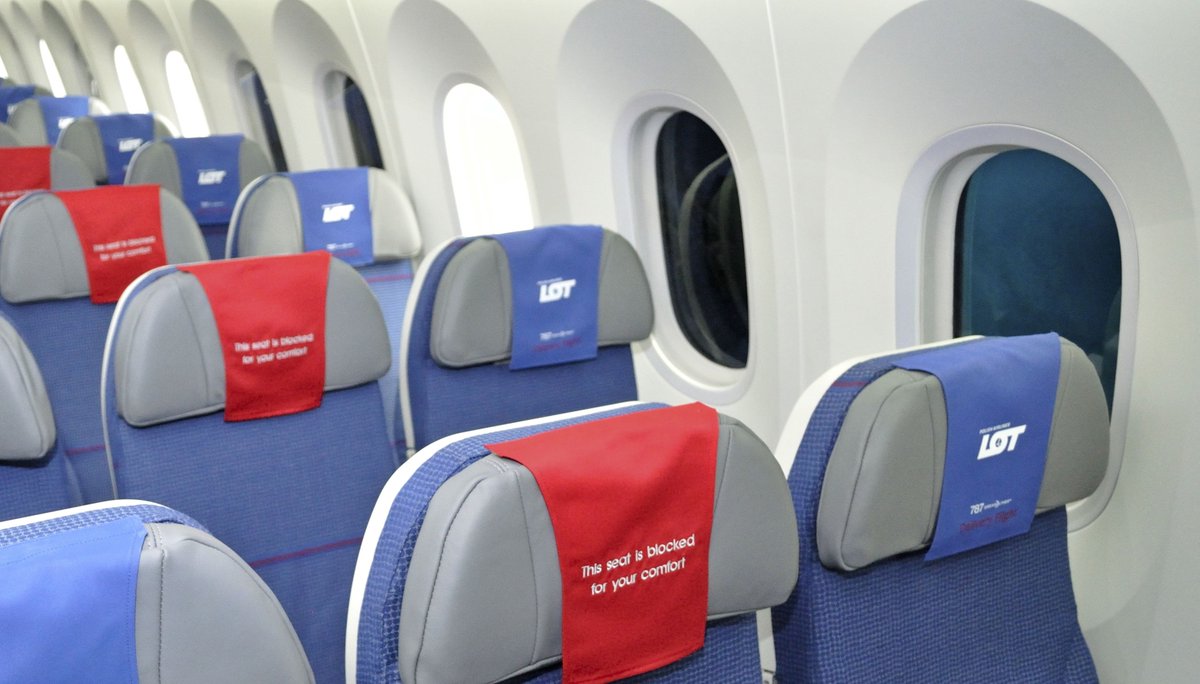 The nose gear of an Ethiopian 787-8 collapsed at gate at Addis Ababa, with all passengers on board, just before departure to Rome Fiumicino... 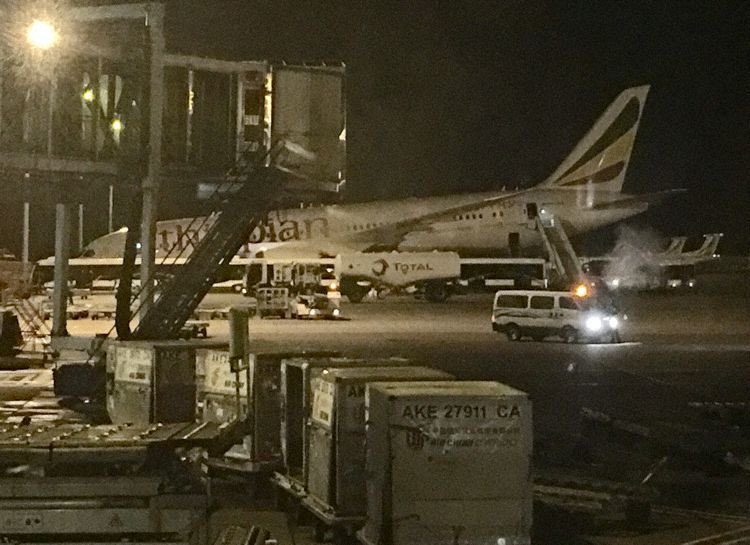 This is the first I've heard there were passengers aboard, but, regardless, raising the gear on the ground is not an easy thing to do. Next to the gear lever is an a button, which is marked as the gear over ride button. It is meant to be used only by flight crew during an emergency or by qualified mechanics when checking the system. To raise the gear the button has to be held down while the gear lever is raise. If there were passengers aboard it doesn't seem likely the pilots would raise the gear and at that point why would the ground crew being checking the gear without the safety pins in place?
Top

A gear pin is hardly ever used during standard ground ops.
Top

Boeing stood little chance of fully recovering almost US$29 billion that has been sunk into producing the B787, says an analyst.
André
ex Sabena #26567
Top

Urgent repair ordered on all 787.

Describing it as an "urgent safety issue," the Federal Aviation Administration has ordered modifications on specific General Electric engines on some 787 Dreamliners because an icing problem could force those engines to shut down in flight.
http://www.telegraph.co.uk/news/2016/04 ... r-engines/

According to the FAA, this directive affects 176 airplanes operated by 29 airlines worldwide


How would you feel using one of the non-repaired one in the next months ?
The ailines should have a very carefull communication I guess
My messages reflect my personal opinion which may be different than yours. I beleive a forum is made to create a debate so I encourage people to express themselves, the way they want, with the ideas they want. I expect the same understanding in return.
Top