Passenger wrote: January 15, 2014. Washington – The National Transportation Safety Board will participate in the investigation of a smoke event involving the main battery of a Japan Airlines B-787 that occurred while the aircraft was parked at Tokyo’s Narita Airport on Jan. 14. The investigation is being led by the Japan Civil Aviation Bureau. NTSB aircraft systems investigator Mike Bauer will travel to Japan to assist with the investigation. All information regarding the investigation will be released by the JCAB.

Because this event can help to find the root cause of the overheating battery cells. The updated design helped to contain the problem and stop it from spreading, but it seems to have the same initial cause as with the previous two incidents with JAL and ANA now exactly a year ago. But while 3 events is too much, it's something that does not occur that often and they don't seem to be able to recreate the exact situation in ground testings, so that doesn't make it easier to find the exact cause, this event can help to solve some questions of the ongoing investigation so it's important the NTSB is involved in this as well.
Top

There seems to be yet another incident with a Norwegian Dreamliner ("Sonia Henie") in Bangkok: a fuel leak out of the right wing. The story is in Norwegian, but the pictures and the video are quite explicit:

Reaction of the crew as reported by a passenger: "When they discovered the problem, they asked us not to take pictures because of explosion hazard. Those who had already taken pictures were asked the cabin crew if they could delete them". To avoid an explosion?

The flight was cancelled and the nearly 300 passengers were bussed to different hotels.
André
ex Sabena #26567
Top

sn26567 wrote: Reaction of the crew as reported by a passenger: "When they discovered the problem, they asked us not to take pictures because of explosion hazard. Those who had already taken pictures were asked the cabin crew if they could delete them". To avoid an explosion?

Standard sentence to avoid passengers from taking pictures which could hurt the image of the airline I suppose. Altough a bit stupid that they 'think'(?) that passengers are dumb enough that they believe they can't take pics because of that and especially when those who already took pictures need to delete them.

Anyway, sad to see once again an incident with a Dreamliner. I really wonder how it comes that so much of these incidents occur with the small fleet of Norwegian...
Top

The crew asking to delete the photos says a lot about that airline.
Top

Looks like fuel coming out of the vent tank, nothing really serious, if the A/C was fully refuelled, then exposed a while in the sun, some bumpy ride on the taxiway, with the thermal expansion, you can get that kind of"leak".

It could be as well a real leak, picture doesn't show much...if they cancelled the flight, they probably also had good reason though.

From a reliable source: the scavenge system emptied the center tank and caused main tank to overflow through the vent....

earthman wrote:The crew asking to delete the photos says a lot about that airline.

why? because the media doesn't know a single thing about aviation and is always looking for attention by blowing everything out of proportion and could harm the airline?
the crew did this with the best intentions for their employer.
i agree its stupid to ask to delete pictures but the knife cuts on both sides
Top

The 19th seemed to be a bad day for the 787.
Apart from the fuel leak, there were 2 more incidents with the dreamliner.

One can always expect some sort of teething problems with a new airplane, but this a bit too much and more importantly, is dragging on too long. Boeing has some serious quality control issues with this airplane.

My partner is to start his typerating on B788 next month, has me kind of worried

Business Week magazine is taking a look at the Norwegian 787 problems:

In what is becoming routine for the Scandinavian discount airline, passengers sat through a lengthy delay after one of its 787s suffered a fuel leak in Bangkok on Sunday. The airplane has returned to Sweden for repairs. Boeing’s maintenance team is now working on the aircraft in Stockholm.

Norwegian has suffered regular maintenance issues with its three 787s, from the brakes to cockpit sensors to hydraulic pumps. Following several harsh comments about the 787′s problems last autumn, Norwegian has softened its public statements about the airplane and has been working with Boeing to improve its fleet’s reliability.

“We share in Norwegian’s disappointment in the airplane’s recent performance and we are addressing that as expeditiously as possible,” said Boeing spokesman Marc Birtel, adding that Norwegian’s 787 performance remains in line with most other operators of the plane, despite the disruptions.

Veteran airline observers consider Norwegian’s frequent 787 troubles puzzling, given that the airline is using the airplane for the type of trip for which it was designed: frequent long-haul flying. It could be that since the 787 is the core of their operation, any issues are far higher profile than on the small 787 fleet at other carriers. Norwegian is also in the position that its entire new, low-fare, long-haul business model is based on the 787 and any disruption to its very small fleet has an out-sized effect than it would on United, ANA or Japan Airlines.
André
ex Sabena #26567
Top

The global 787 fleet currently operates at a dispatch reliability of 98% up from about 97% in October last year, but Boeing says they are not happy with it (well...I think their customers are not happy either). Boeing wants to get the 787 at the same level as the 777 which has with 99,4% about the best dispatch reliability of all double-aisle aircraft. Though it took Boeing from 1995 (when the 777 was introduced into service) up to 1999 before the 777 reached the 99% mark and a similar effort is expected to get the 787 at that level.
Boeing also said in response to the recent JAL battery incident that although it was a contained on-ground faillure, they might still change the battery design depending on the final conclusions of the investigation reports of the NTSB and the Japanese authorities expected later this year as the NTSB recently announced.

The Reuters article that you quote is interesting: the Boeing statements were made in a press conference convened in Oslo to address the 787 problems of Norwegian, who is probably the customer having the highest rate of problems. Norwegian has probably a dispatch reliability well below the 97 or 98% registered as a global 787 fleet average. A good reason to have sent a large team of specialists (15 people, if I'm not mistaken) to Oslo to cure the Norwegian problems.

Let's hope that Boeing can address these problems in a satisfactory way for all their customers, and not only the big ones such as ANA, JAL or United.
André
ex Sabena #26567
Top

Latest rumour I heard is that privatair will transfer it's B787 that his has on prder to ECAIR as soon as it get's delivered. Ecair is looking to expand its longhaul fleet out of BZV and PNR and is allready operatin 2 B757 and one B763 will join shortly. Also 2 B737 will join the shorthaul fleet soon
Top

sean1982 wrote:Latest rumour I heard is that privatair will transfer it's B787 that his has on prder to ECAIR as soon as it get's delivered. Ecair is looking to expand its longhaul fleet out of BZV and PNR and is allready operatin 2 B757 and one B763 will join shortly. Also 2 B737 will join the shorthaul fleet soon

True romax, there were indeed 2 B787 on order, both of which will go to ecair. All a/c in the ecair fleet are operated by PrivatAir but owned by ecair
Top

Jetairfly boeing 787 arrival time today 04.40 from Cancun is delayed till sunday 06.15.
What's the reason for this huge delay?
Thanks.
Top 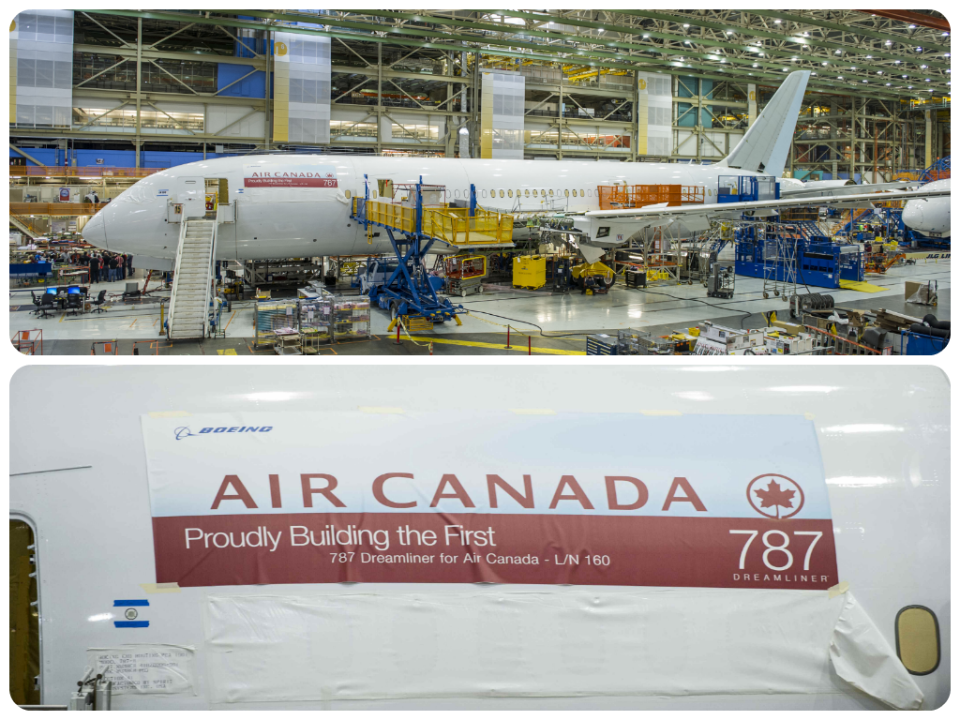 http://seattletimes.com/html/businesste ... onxml.html
The fastest production ramp up of a widebody aircraft in history is proving to be a nightmare for Boeing (or better say the people working for Boeing). Mainly in Charleston things are being messed up due to the high work loads. And not only the FAL in Charleston, also the fuselage sections that are prepared overthere for Everett are arriving there with work that proved to be unfinished. The building quality in Charleston is going downwards instead op upwards.

That's probably also while the amount of aircraft leaving FAL is quite high compared to the amount of aircraft that are delivered. Mainly the Qatar 787's built in Charleston prove to be a problem, even the painting (which is done by a contractor in Ft. Worth until Charleston has its own paint hangar, which is currently being build) proves to be an issue with Qatar demanding their aircraft to be painted by another contractor than the one on Forth Worth.
Top

Another problem for a LOT 787: a computer glitch forces the Polish airline to switch jets.

A computer malfunction on a Boeing 787 Dreamliner forced LOT to call off a transatlantic flight from Warsaw late on Monday and switch the passengers onto another jet instead.

The glitch, the latest in a series of operational problems that have dogged the Dreamliner, caused the passengers' departure for Toronto, Canada, to be delayed by a few hours.

"We had to restart the on-board computer just before take-off," said a LOT spokeswoman. "Since such a restart and a consequent check-up of all systems takes a few hours, we changed the plane."