I booked the holiday in December 2019, before COVID had even been heard of, but it was touch and go whether we would actually get our trip because of the virus. I had booked our "usual" flights, but a couple of weeks before we were due to go I was emailed by KLM to say that the AMS-WAW flight had been cancelled. That led to a stressful night wondering what would happen, as I was not flexible with dates and if we weren't rebooked on a flight for the original date then we would lose the whole holiday. KLM did rebook us, instead of flying out from EDI at our usual 09:10, we were now going to fly at 06:00, meaning an 04:00 baggage drop off at the airport.
I checked in online the day before the flights, and decided to go for an upgrade to Business Class on the EDI-AMS leg of the trip. Our seats were changed from 06A and 06B to 03A and 03C. This would be the first time we had flown in Business.

After setting the alarm for 02:45, we headed to the airport in the pouring rain (the shuttle bus from the hotel to the terminal isn't running at the moment). We were able to check in straight away, and the girl who checked us in was originally from Warsaw - a nice coincidence

. She recommended visiting Gdansk and Gdynia sometime when we are in Poland.

It was dead in the airport, and most things were not yet open (or not opening at all). It was still raining and it was dark so nothing much to see or do until our gate was announced on the screen. 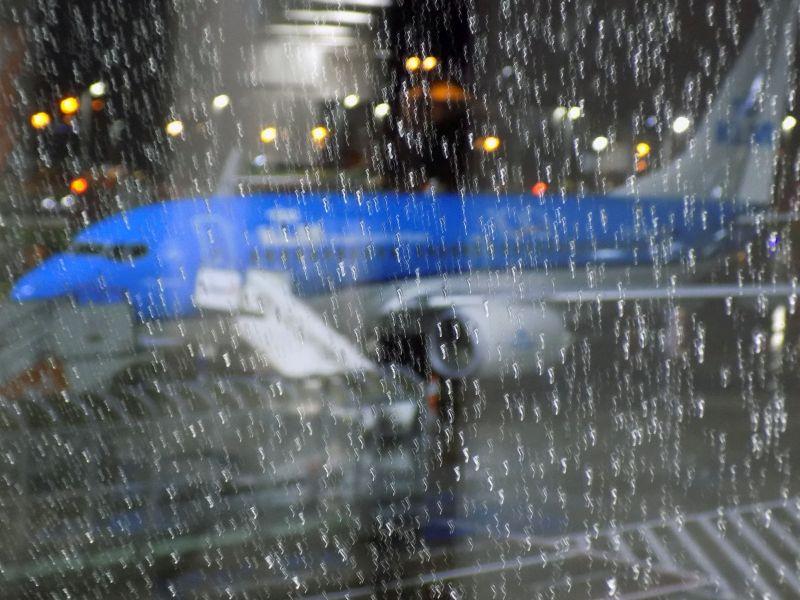 Our aircraft was 737-700 PH-BGG "Koningseider"/"King Eider" (all KLM 737s have bird names). The aircraft had arrived the night before and spent the night in EDI. Sorry about the rain on the window but it was still bad that morning. 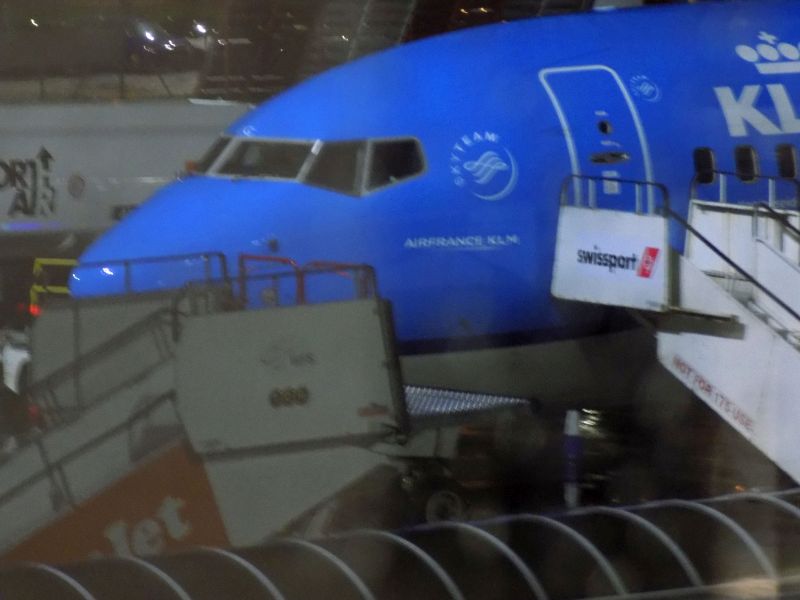 PH-BGG before the crew had boarded and turned the lights on.

Unfortunately the aircraft was not connected to an airbridge so we had to board up the steps and hope we didn't get too wet. It was nice to get onboard and settle into our seats, which had very good legroom for our short flight. 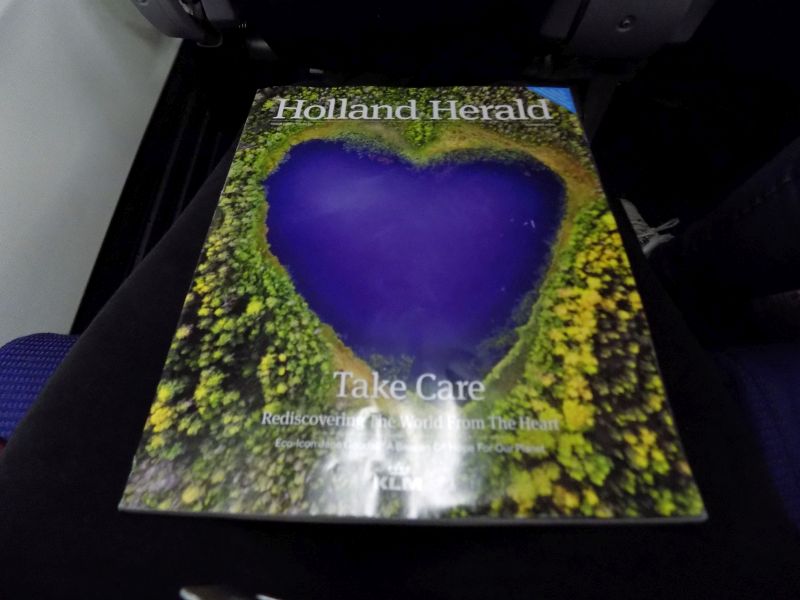 The latest issue of Holland Herald. I thought airlines weren't providing inflight magazines so I was surprised to see this one. 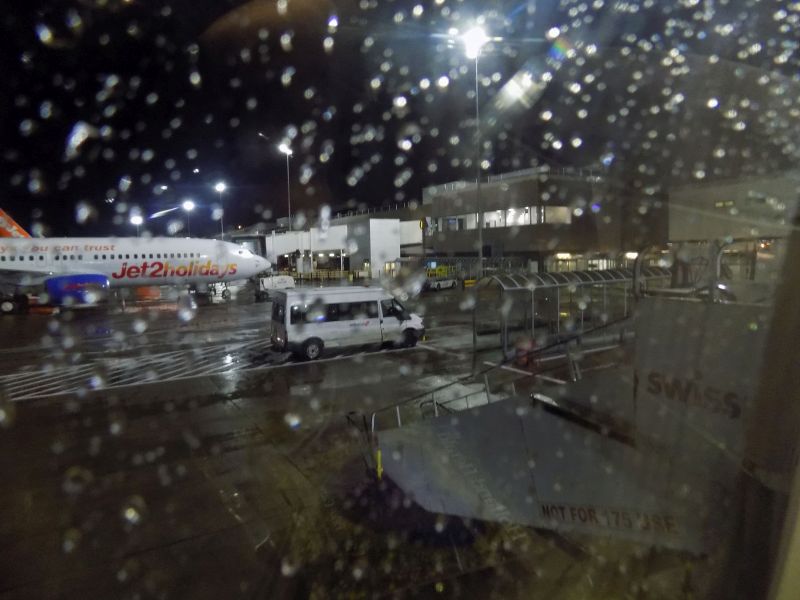 The view through the rain from my seat, towards our neighbour, a Jet2 737. 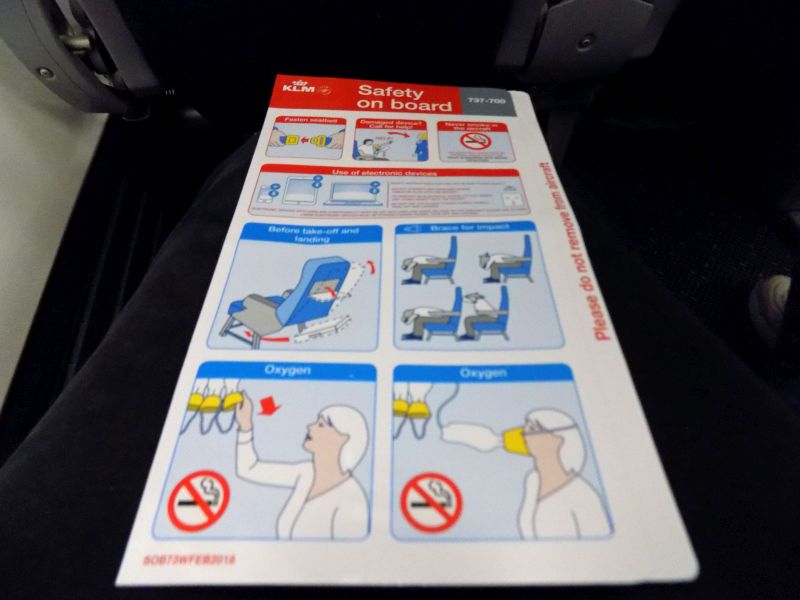 We had an early push back - 05:48, and we took off at 05:57. Early departure means early arrival in AMS, perfect when you are transferring 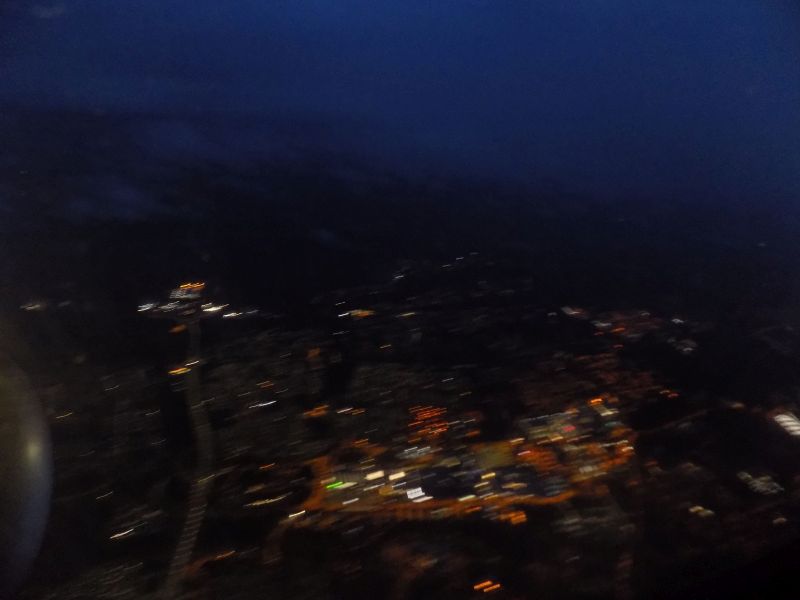 Just after take off from EDI.

It was cloudy and turbulent as we climbed. 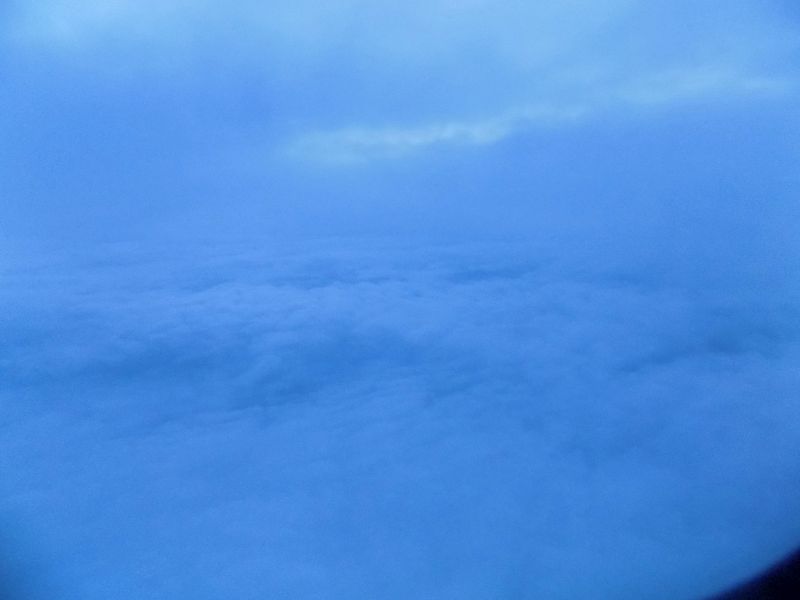 View through the clouds. 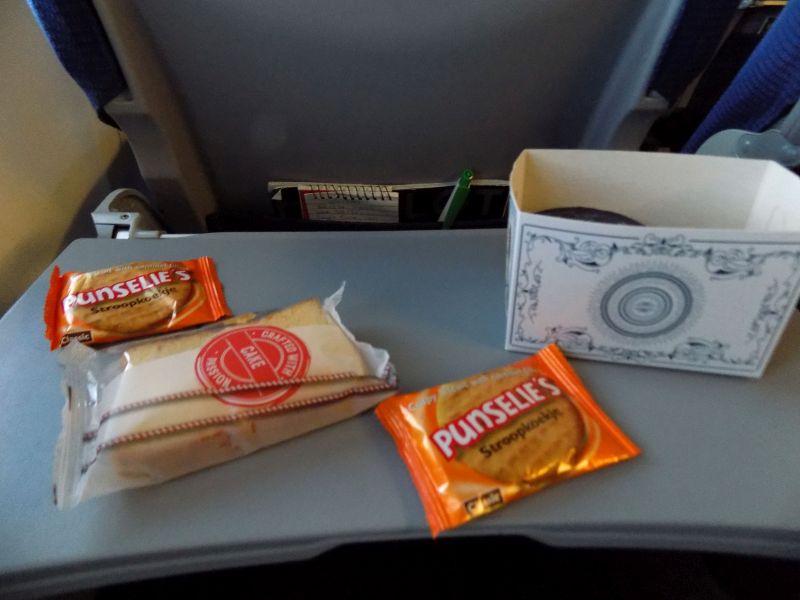 The inflight snack consisted of the lemon cake making a welcome reappearance on the morning flight, and a caramel biscuit. Business Class passengers were also offered the choice of a salad but we didn't want salad so just had the lemon cake. 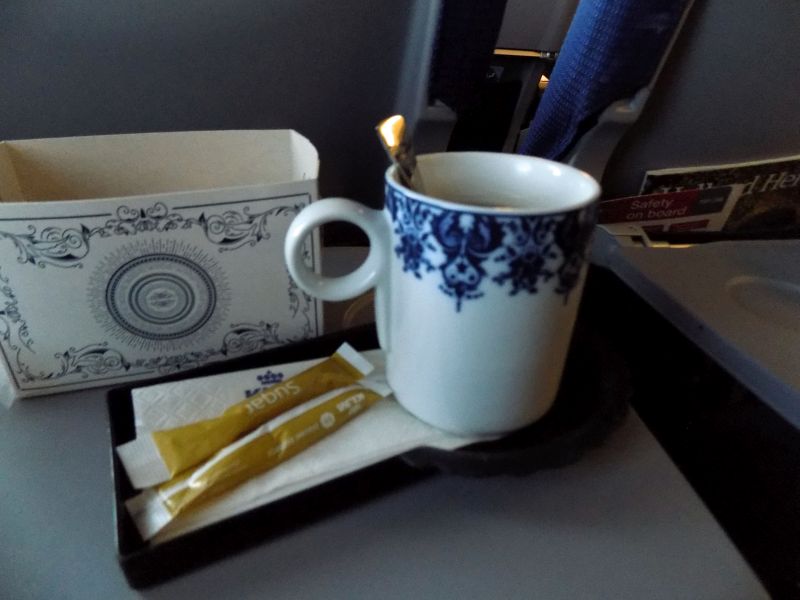 In Business Class hot drinks are served in china cups. This is my tea. 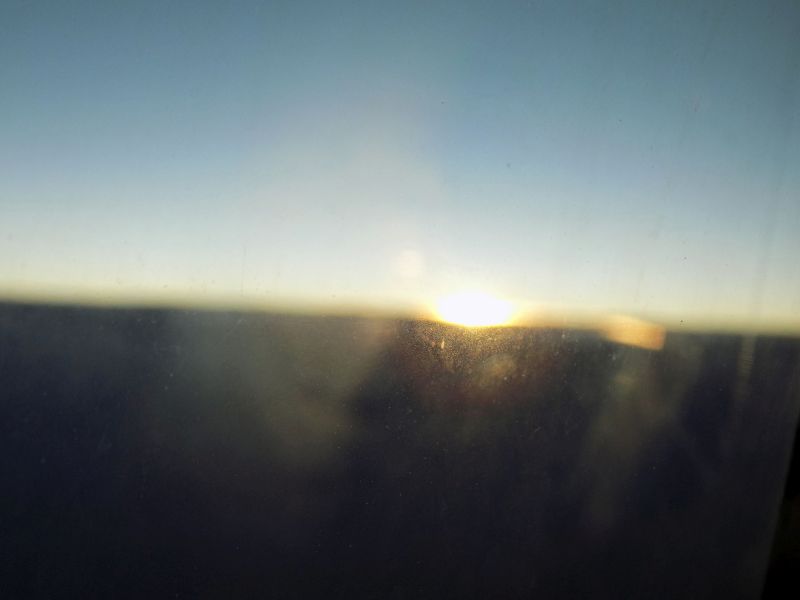 Sunrise as we flew towards AMS. 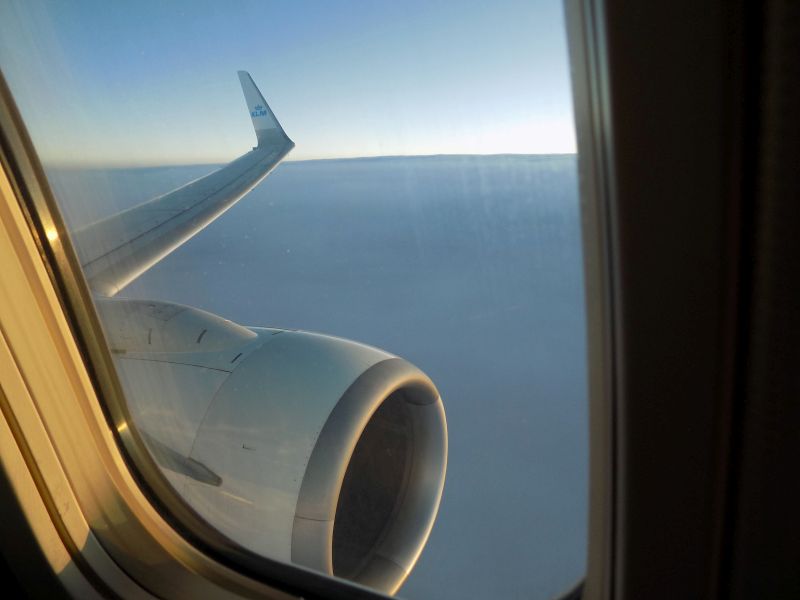 I've never sat so far forward on an aircraft since I once visited the flightdeck of a 747-400.

There were some very high clouds along the way. 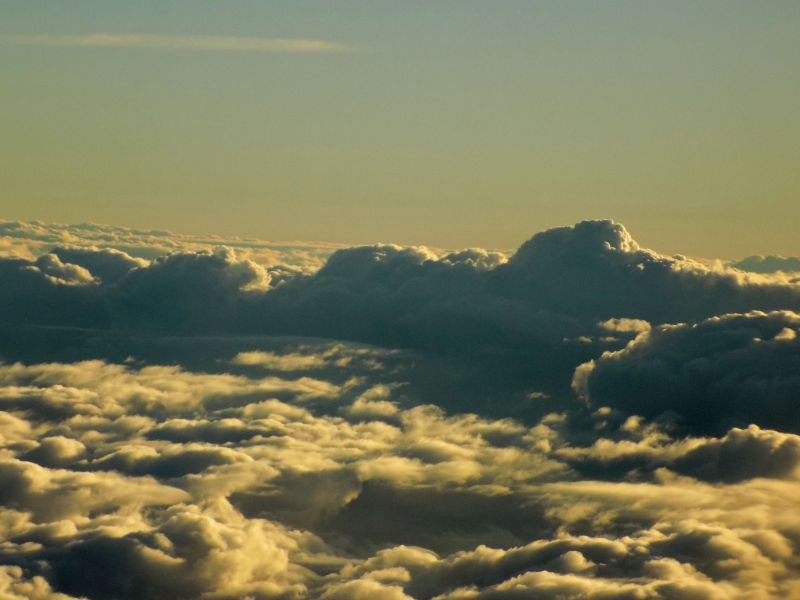 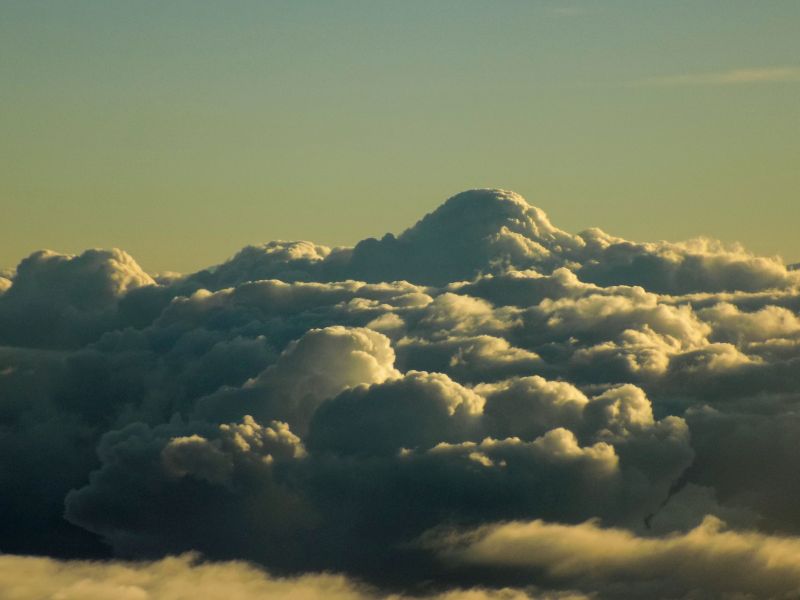 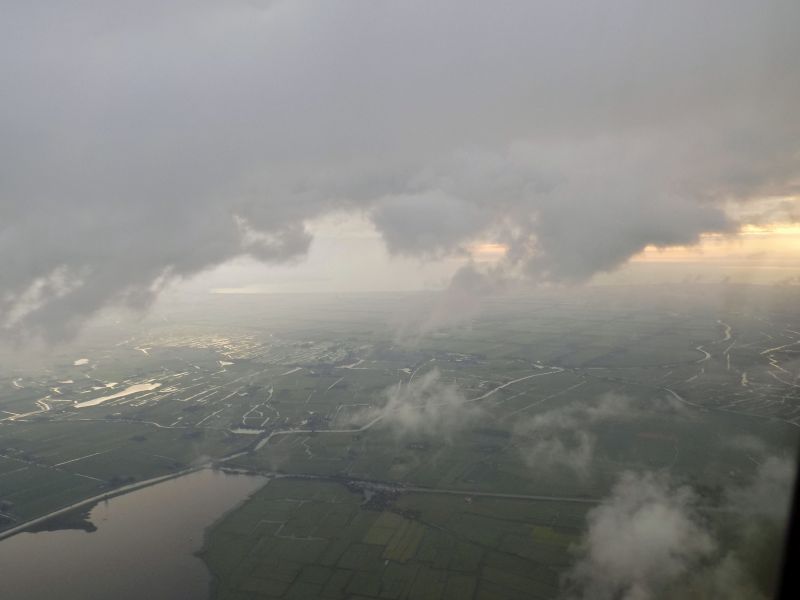 Descending through the clouds towards Amsterdam.

We landed at 07:58, unfortunately we didn't get my favourite runway. 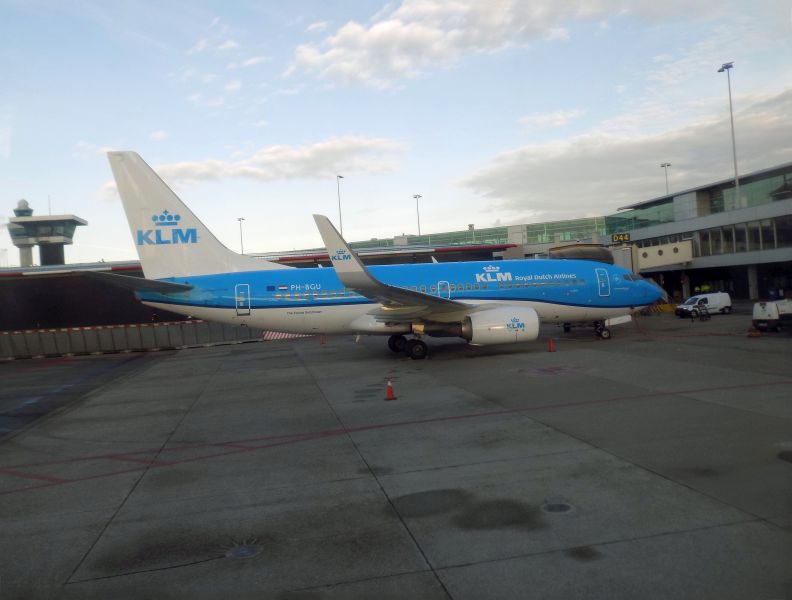 Our neighbour at the terminal.

Our route from Edinburgh had taken us down over Northumberland National Park. We flew over the North York Moors National Park and crossed the English coast between Bridlington and Hornsea. We flew at 39,000 and at one point we were flying at 539 mph on a heading of 125 degrees. It was a very good flight.

We had an easy transfer in AMS, and headed to the next gate to wait for the flight to Warsaw. This was to be boarded by bus, and, despite all the talk about "social distancing" there is no such problem when cramming lots of people into a crowded bus to drive them to the aircraft!

Our aircraft this time was an Embraer 190 - PH-EZE - my least favourite aircraft in the KLM fleet. We were seated in seats 7A and 7C. 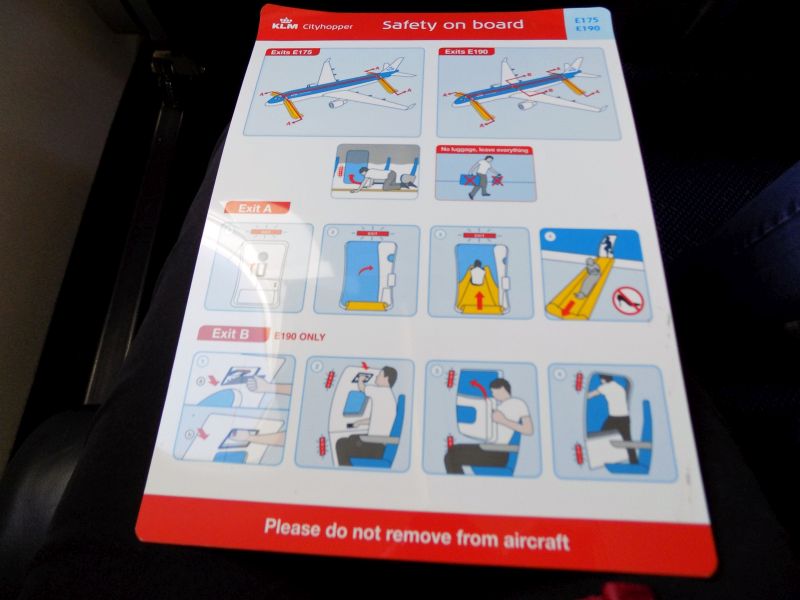 The safety card of the Embraer 190. 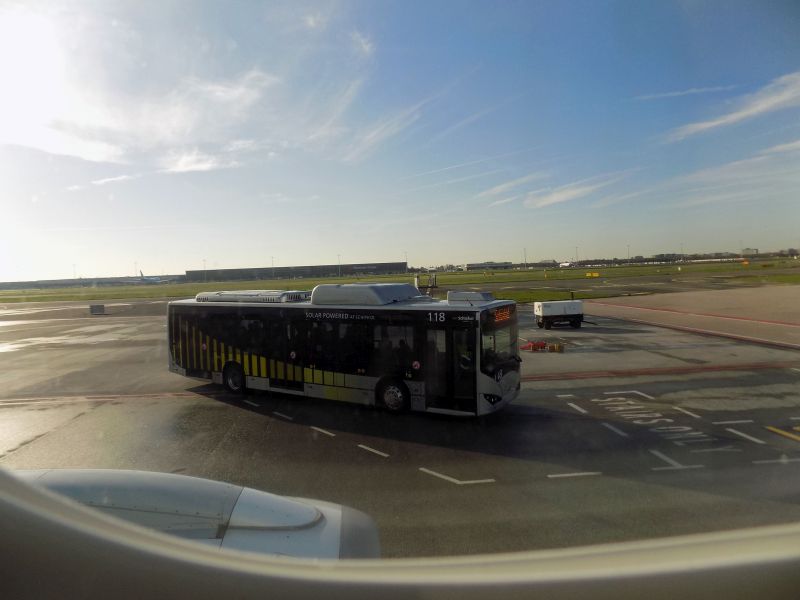 The bus bringing more passengers to the aircraft. 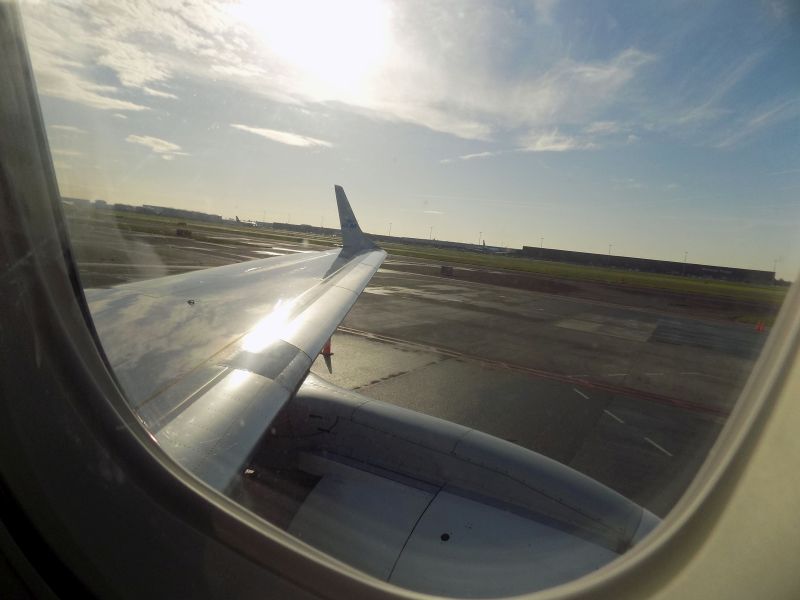 I had to look back over my shoulder to take this photo through the window. I do not like the Embraer 190 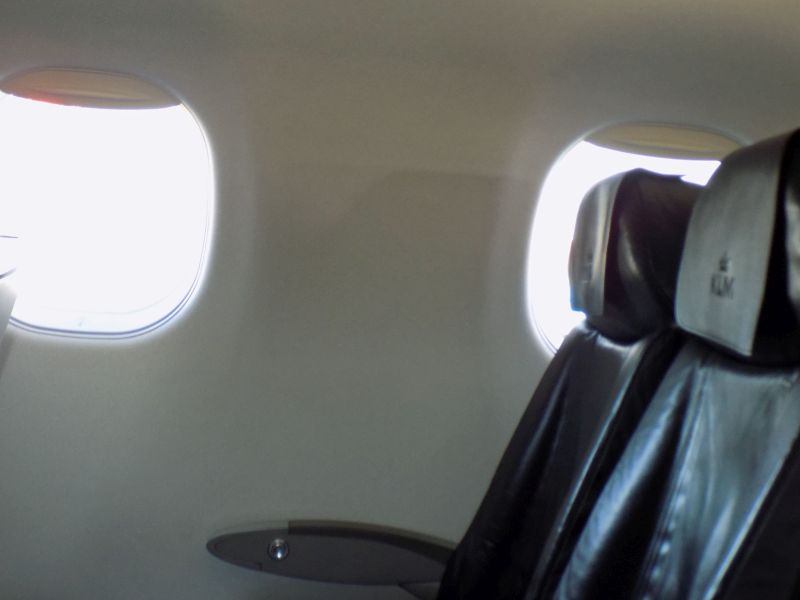 The awful seat alignment in the Embraer 190. You either have to lean right forward or look back over your shoulder to see through the window properly.

We pushed back at 09:46 and had a short taxi to the runway (big disappointment, I like the long taxi best 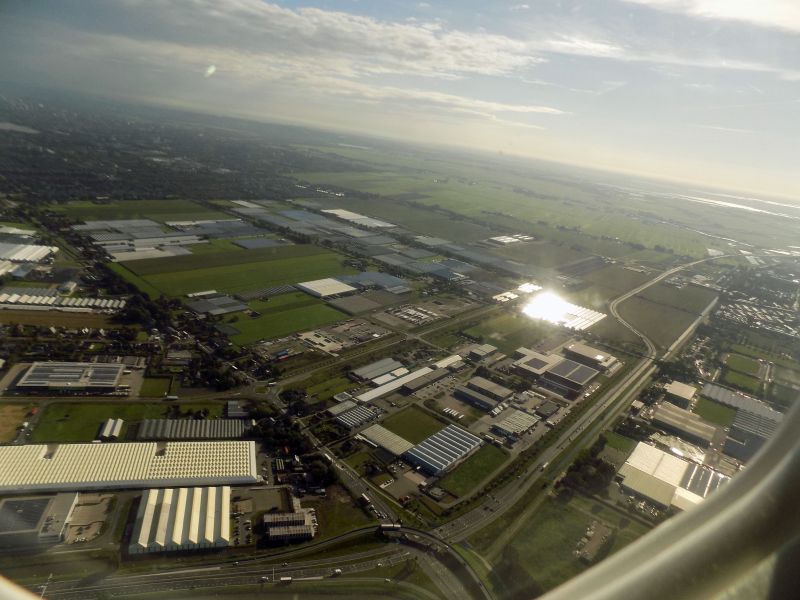 Our flight was expected to take 1 hour 40 minutes. 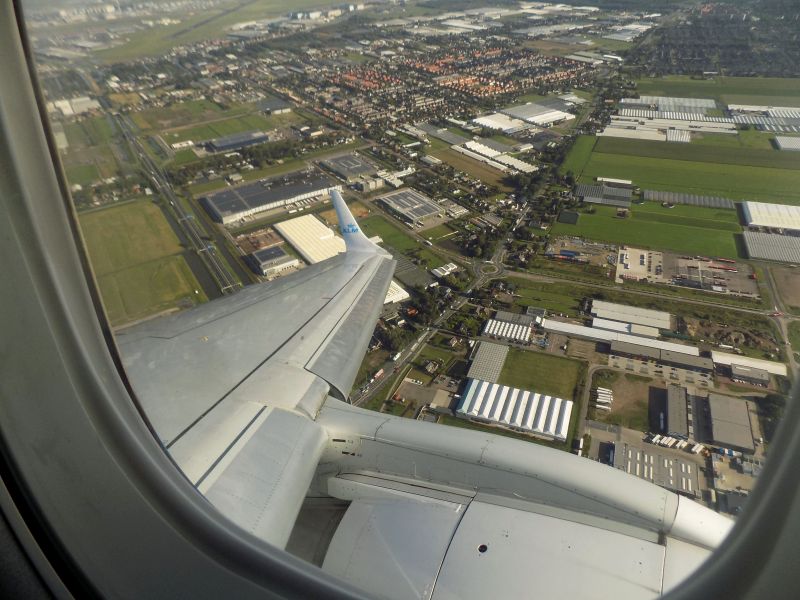 It had turned out sunny in AMS so the viewing was clear.

We had to fill in passenger locator forms before we arrived in Poland. 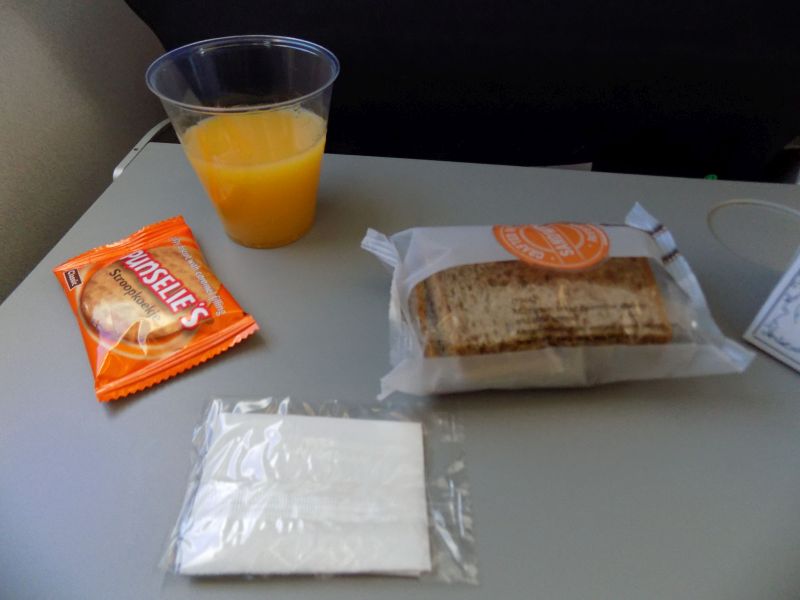 The inflight snack consisted of the first of many Beemster cheese and basil spread sandwiches. I like the Beemster sandwiches but I also like some variety, which you used to get with KLM. 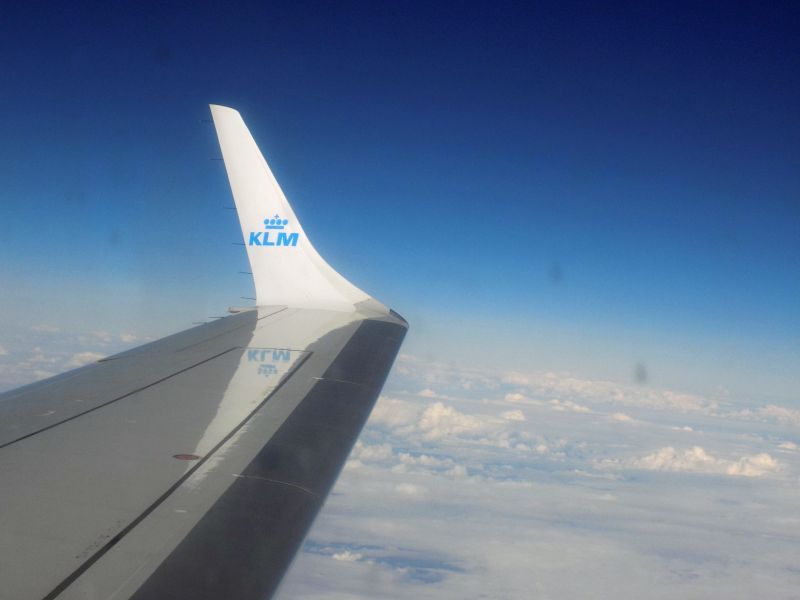 Inflight above the cloud. 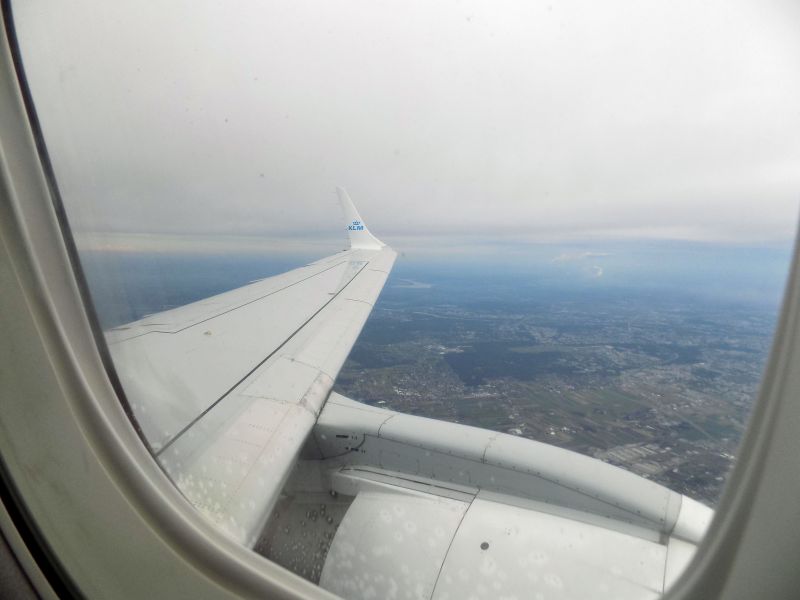 We had a cloudy descent into Warsaw. 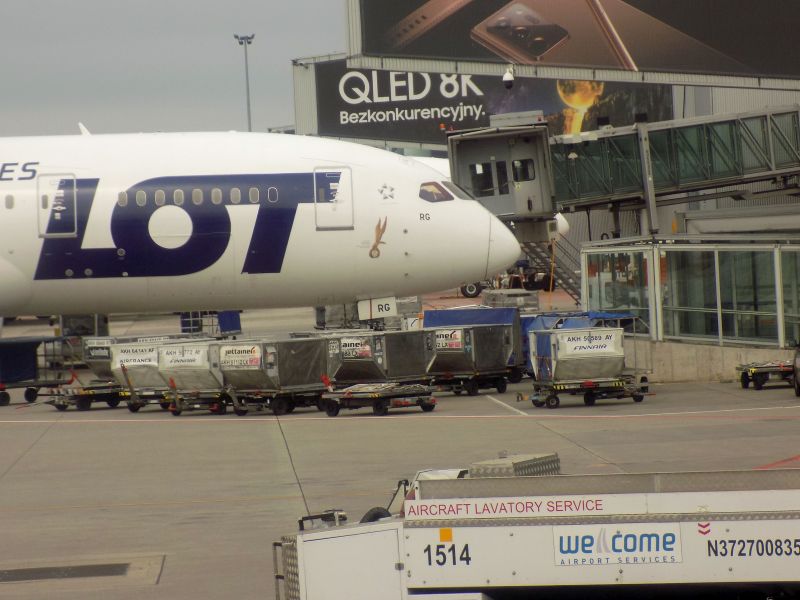 Our neighbour at the gate. There were very few other airlines at WAW and nothing like the bustle we are used to when passing through airports. 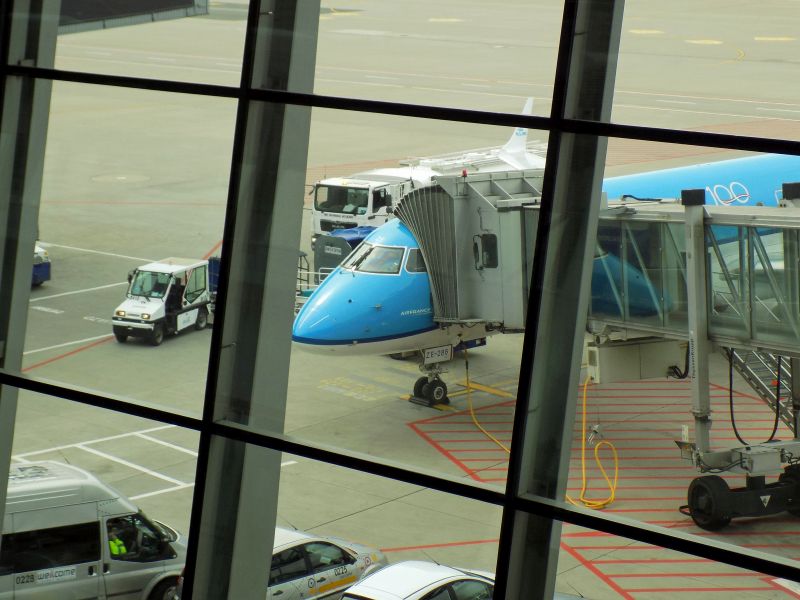 Our aircraft parked at the gate in WAW. I didn't get chance to take a photo before we boarded in AMS.

Our route had taken us across Germany south of Osnabruck and south of Hannover. We cruised at 37,000 feet at a speed of 498 mph and at one point our heading was 86 degrees.

Good flights but I wish our second aircraft had been the originally-scheduled 737-800.
Sabena and Sobelair - gone but never forgotten.
Louise
Top

About the seats in the Embraer E-jets: it's not Embraer's fault if they are misaligned with the windows, it was KLM's decision to cram more seat rows than windows, resulting in some seats having poor views. I guess you had a poor legroom on that flight, which is very surprising for a Dutch airline, since the Dutch are the tallest people on earth.
André
ex Sabena #26567
Top

Thanks for the comment Andre. The KLM Embraer 190s are the only ones I have experienced so I have based my opinion of the type on them. If another airline had a better seat to window placement I would probably change my view because that is my big "gripe" with flying in the aircraft. The legroom seemed OK, but we were in the Economy Comfort seats so that maybe made a difference. I also like the 2-2 seating. My inflight video however, is absolutely awful because it was hard to get the camera placed well because of having to lean right forward. That is one flight video I won't be uploading to YouTube