Share your experiences about your latest flights: details and pictures are highly appreciated by our community. How do you rate airlines, in-flight meals, frequent flyer programs, etc... join this forum now!
Post Reply
16 posts • Page 1 of 1

It was great to book a nice holiday which would guarantee good food and beer, unlike our holiday of 2013 when the food was uninspiring and the beer weak and tasteless. We booked a week in Oostende and decided to have our first flights on Brussels Airlines.

Before leaving for Manchester on 31st August I checked in online and saw that we had been allocated seats 19E and 19F, which I decided to leave as they were.

We had a night at Crowne Plaza Manchester Airport, where the Thai restaurant is to be recommended! On the Monday morning it was raining, which was a pain! We caught the courtesy bus to the airport terminal.

We had to queue to drop off our luggage, but at least we had checked in and had a good seat.
The viewing at MAN is very poor now compared to what it was like, and the weather didn't help.

An MD11 of Lufthansa Cargo passes the terminal.

Thomson Dreamliner, the first 787 I had seen moving.

Aurigny, from the Channel islands. 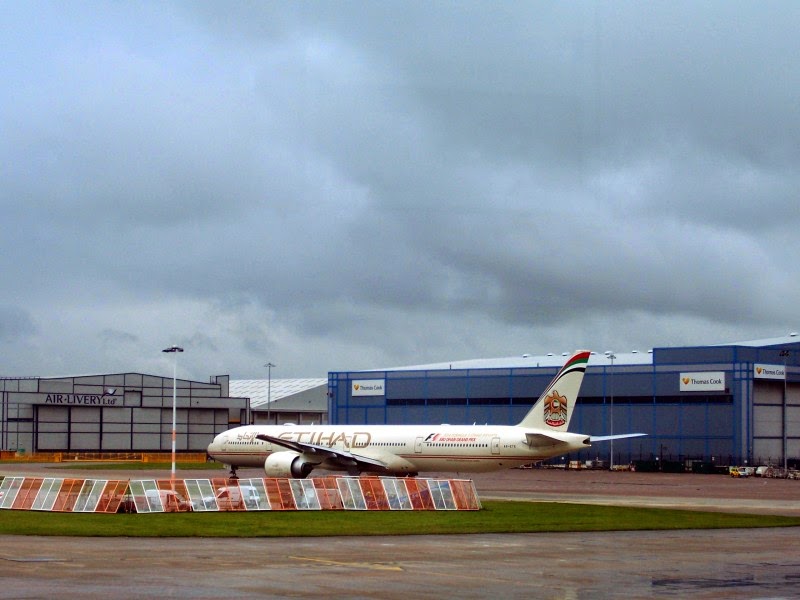 SN2174 is often late, and this was no exception. I was watching out for the distinctive spotted "b" tail, so I was taken by surprise when our aircraft was OO-SSC, the Star Alliance plane! 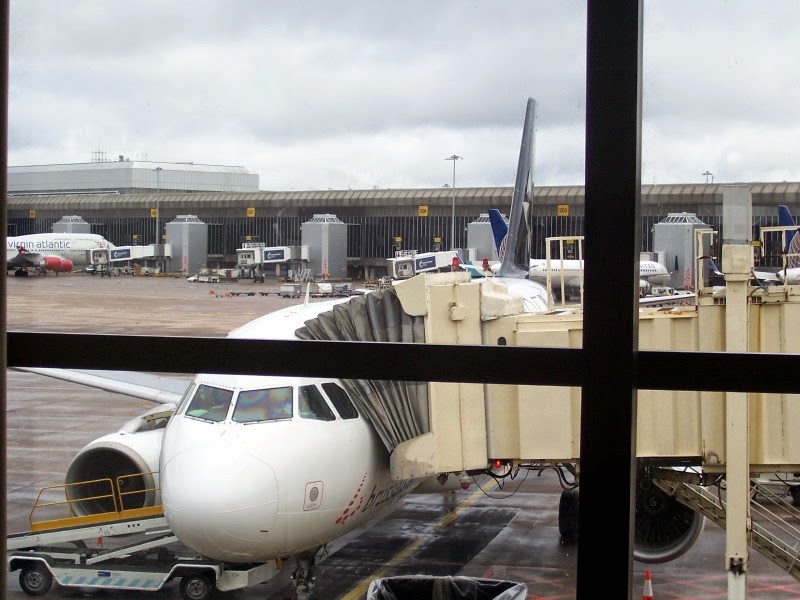 We had a celebrity on our flight - Vincent Kompany, captain of Belgium! (Though I wish it had been Marc Wilmots

Our flight was scheduled to depart at 10:25, but it was 10:42 when we were called to board. The flight had a crew of two stewards and one stewardess and a Captain Gilbert(?) 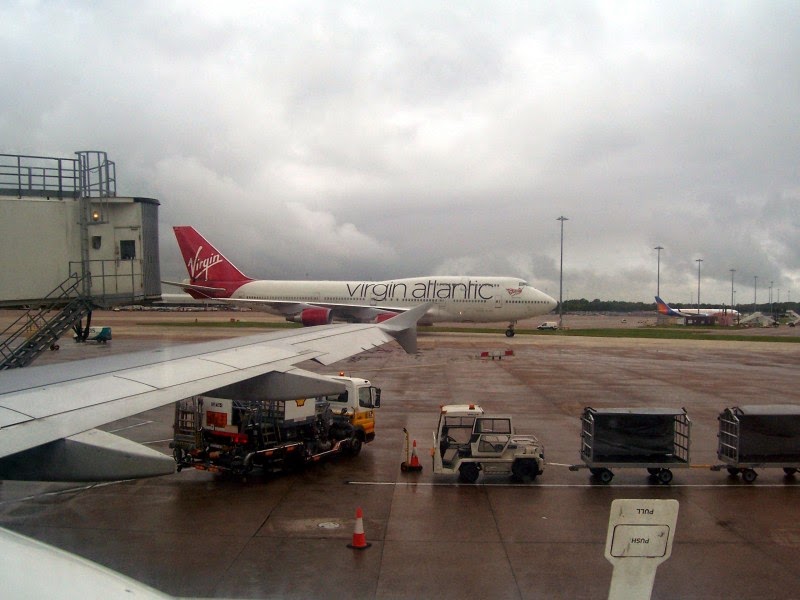 The view from my seat. We took off behind this VS 744. 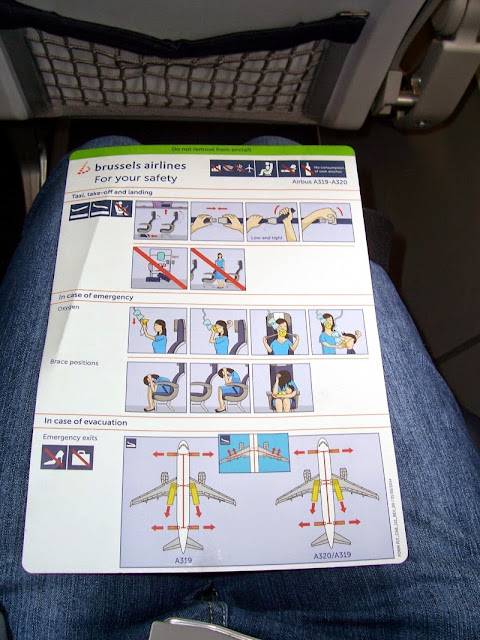 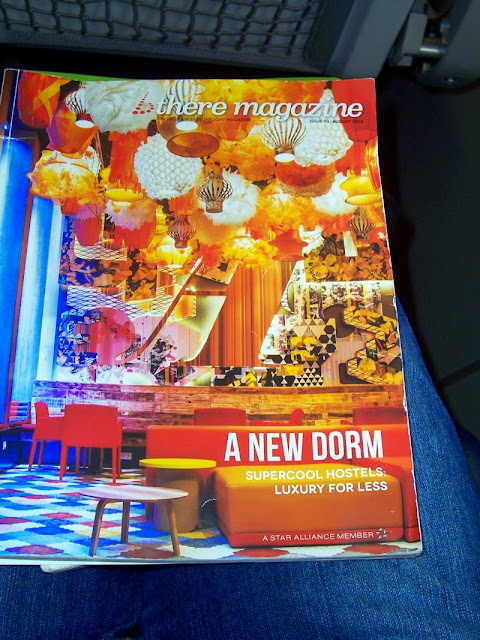 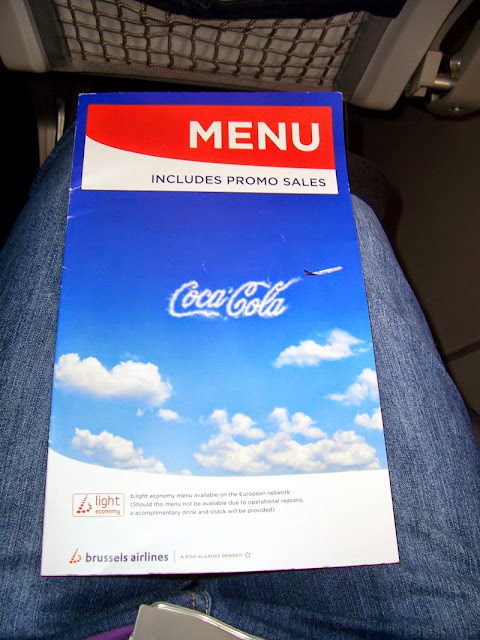 The SN inflight menu. We didn't buy anything. 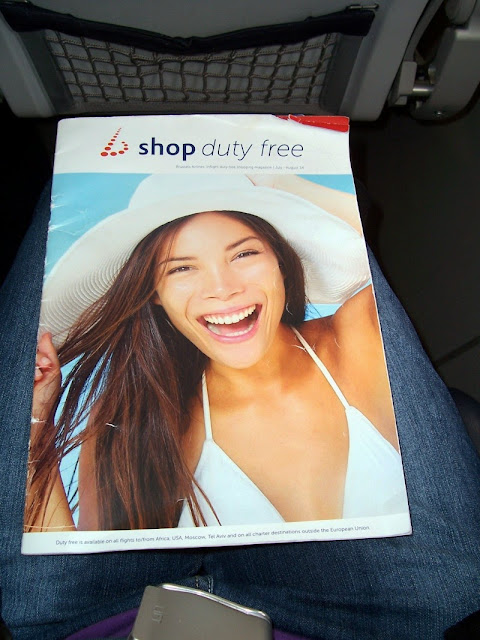 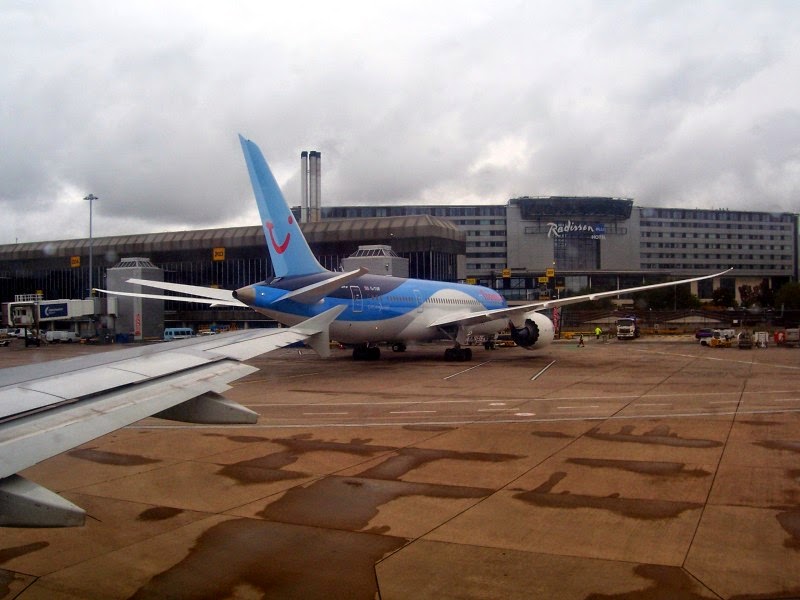 Dreamliner from my seat.

We had thin cloud as we climbed, and it was no longer raining. 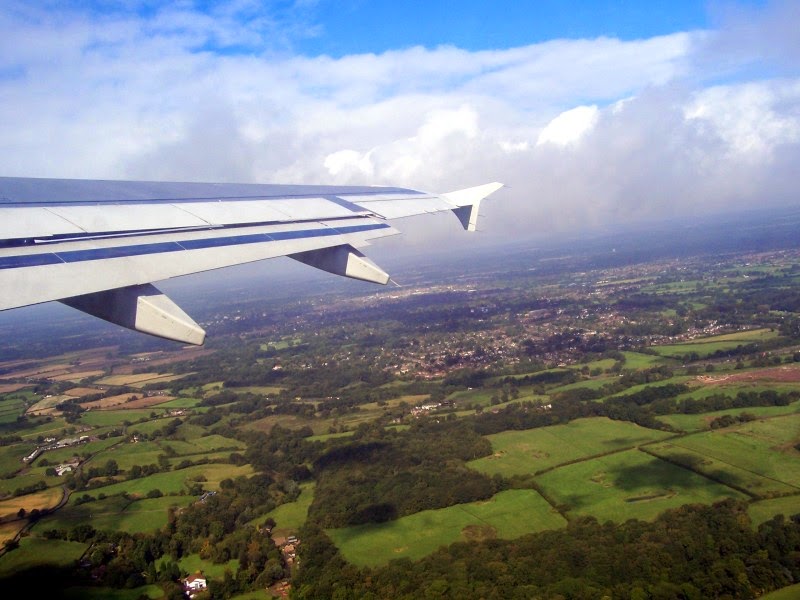 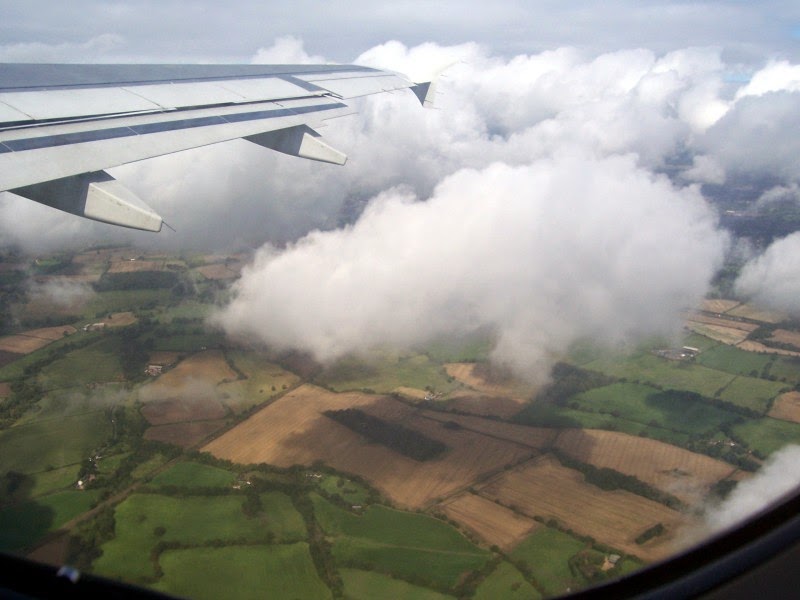 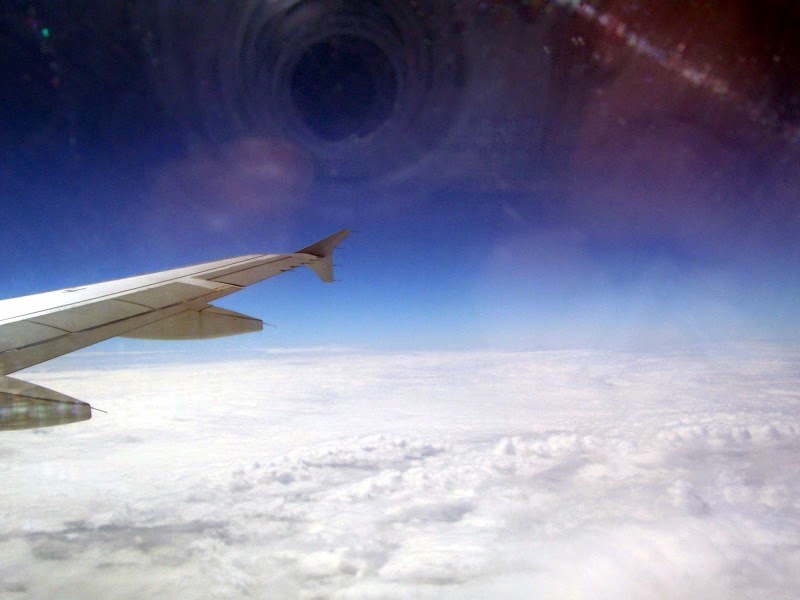 Above the weather, on the way to Belgium (at last!!)

We had been told the flight would take about an hour, and the weather in Brussels was fine. The cloud along the way was quite thick though. 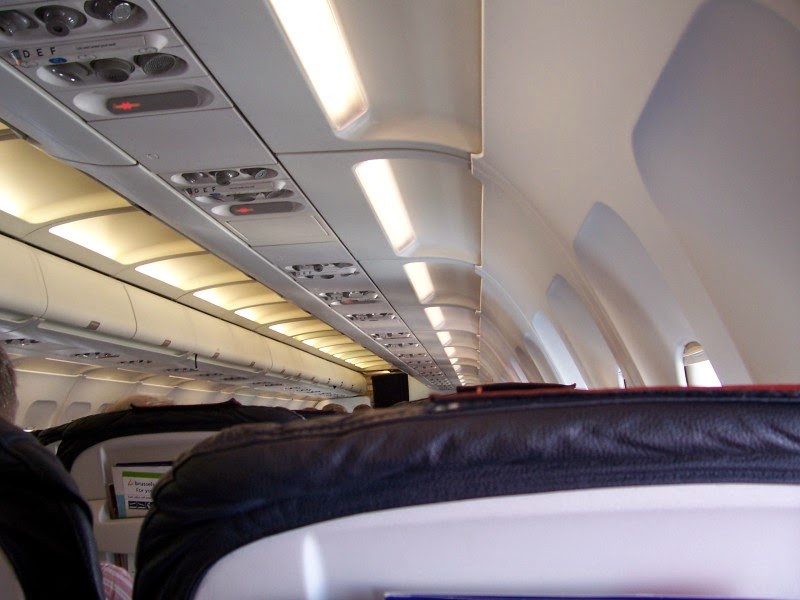 View inside the A319. the seats were thin, with reasonable legroom. They were like the ones we had on Lufthansa in 2013. Unfortunately there was no Airshow on this plane, which was disappointing. 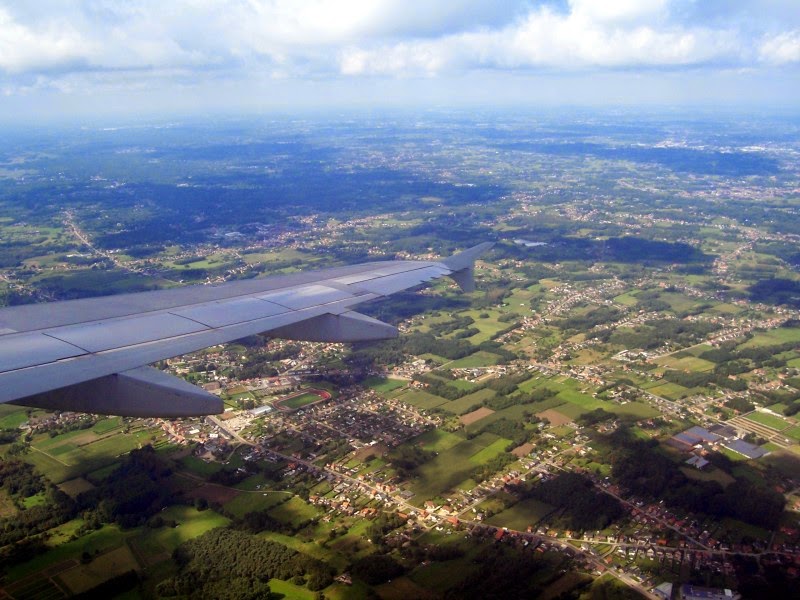 The nicest view I have had from a plane in two years! We had descended through thick, turbulent clouds and Belgium was looking sunny! 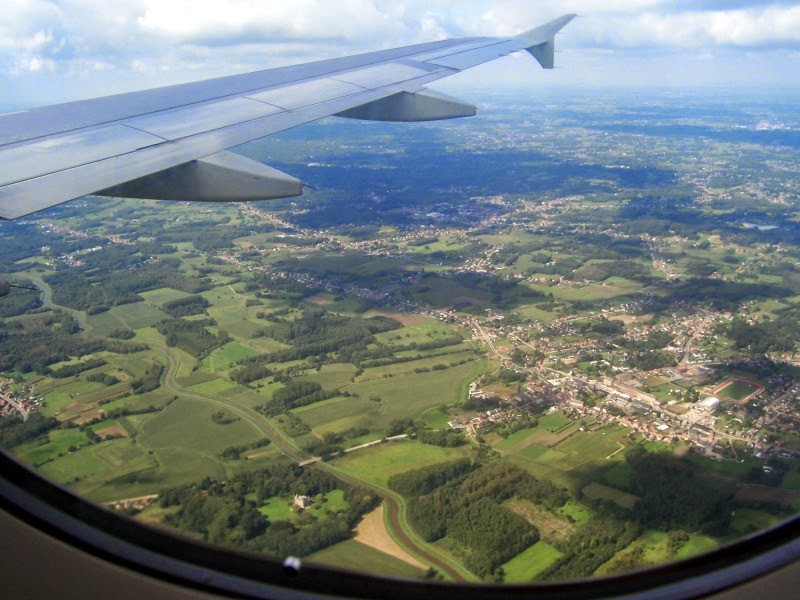 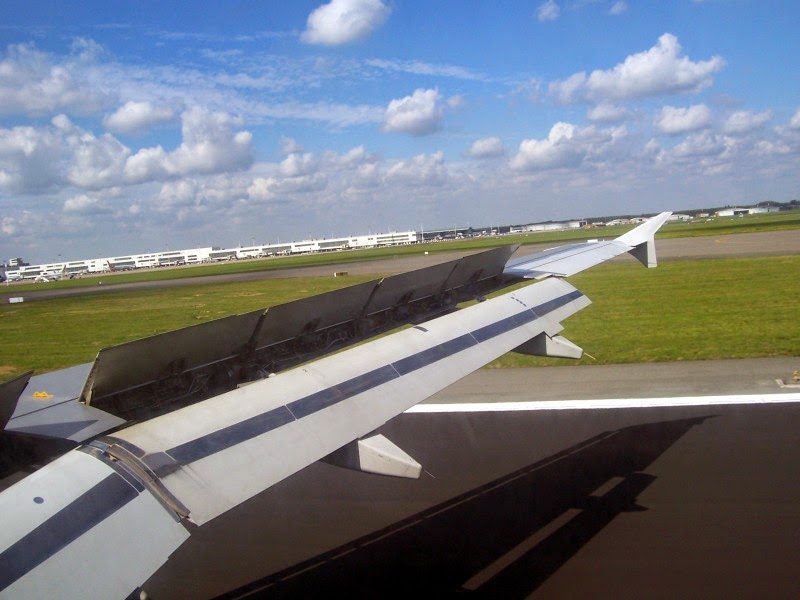 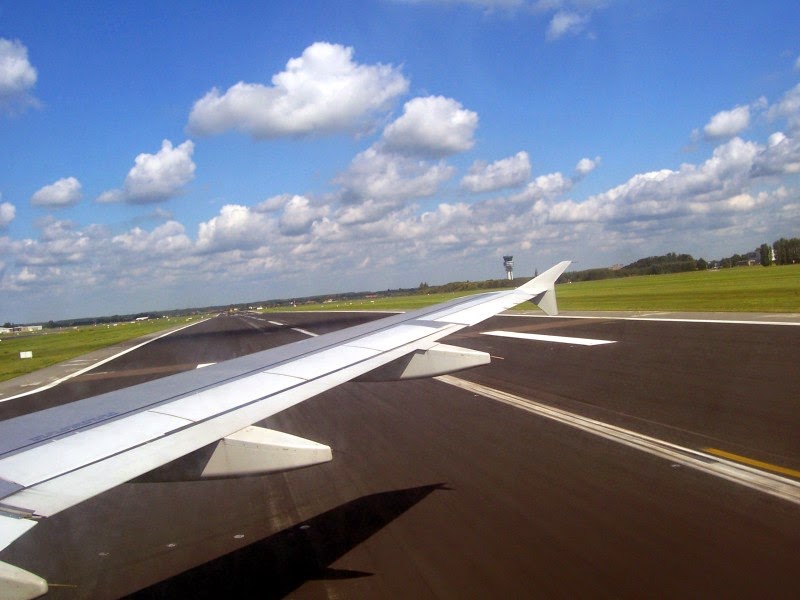 Turning off the runway. Not sure which runway, maybe 25L? 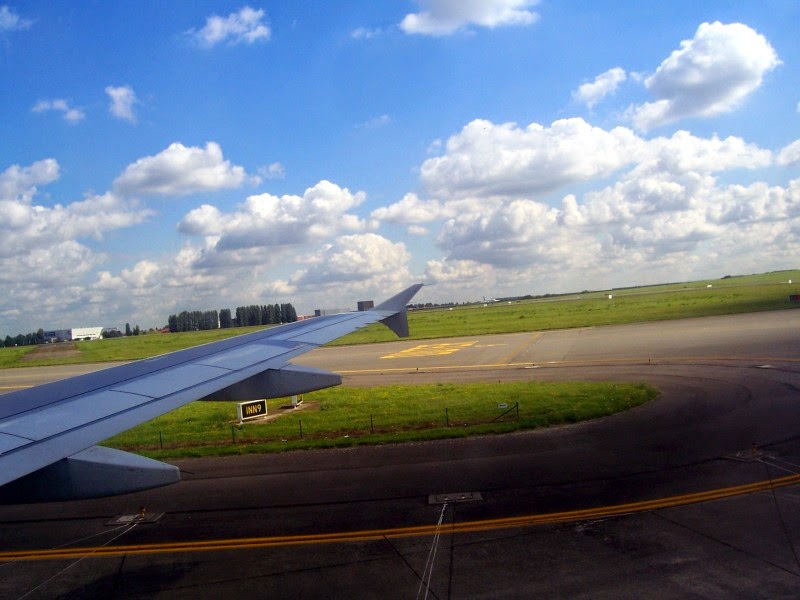 Taxi-ing to the terminal. 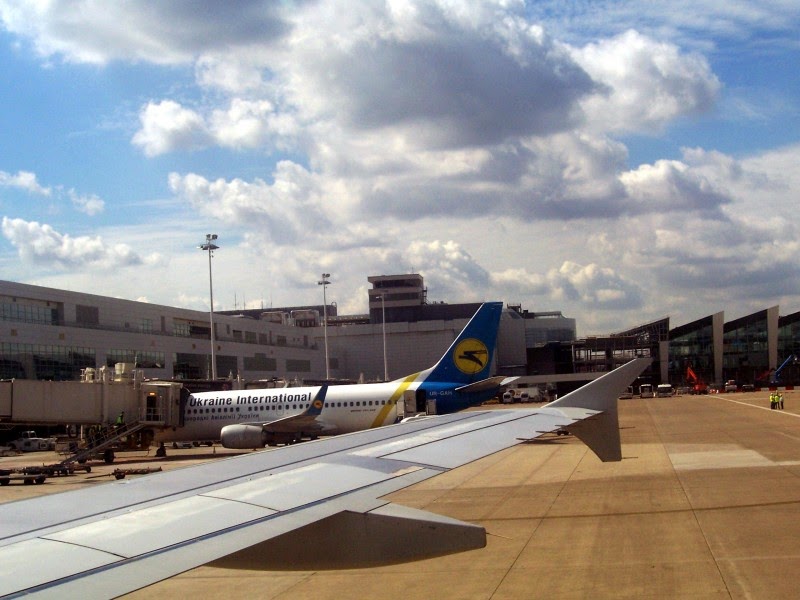 We caught the train to Antwerp, as it is less hassle then fighting your way through a packed train at Brussels Noord station. 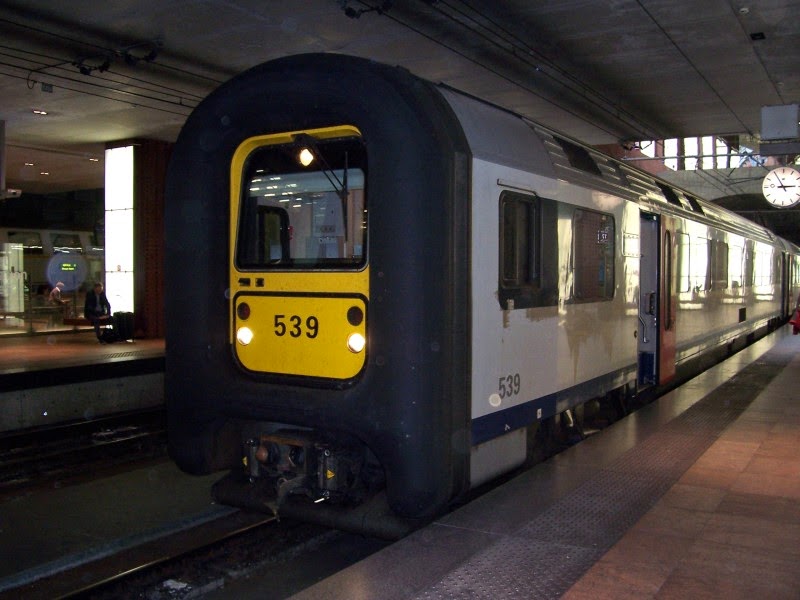 Our train from the airport after arrival in Antwerp. These are superb trains, brilliant for the Airport run.

We were hungry when we got to Antwerp, and so we had some superb chips and mayonnaise at Frituur Centraal on the station before catching our train to Oostende and having a fantastic holiday to make up for the disappointing food and beer we had in 2013.
Last edited by Comet on 25 Sep 2014, 12:14, edited 3 times in total.
Sabena and Sobelair - gone but never forgotten.
Louise
Top

Nice report, THX.. pity of the weather...
Nice livery STAR ALLIANCE, as the rumors of a new livery for the dotted tails are spreading

I only just managed to get our plane on video as it was passing, but I was disappointed not to get a good shot of the special livery. I enjoyed the flight, as I am always happy if I am by the window. It would be nice to see a new livery for Brussels Airlines, I've never been keen on the spotted look.
Sabena and Sobelair - gone but never forgotten.
Louise
Top

Thanks for your nice report, Louise, which also includes some train spotting

The Thomson Dreamliner looks exactly like the Jetairfly one. All in the family!

Do you really need an airshow in the plane? You prefer to look through the window, don't you?
André
ex Sabena #26567
Top

sn26567 wrote:Do you really need an airshow in the plane? You prefer to look through the window, don't you?

Are there any airshows on medium- or short-haul aicraft of SN? Never had one...only on long-haul.

I also prefer to have one AND look through the window, maybe personal but always a disapointment if there's no moving map...
Top

sn26567 wrote:Are there any airshows on medium- or short-haul aicraft of SN? Never had one...only on long-haul.

Yes, On my return flight from Madrid recently, the SN A319 had that, would be great if more had it and also that you could follow the flight trajectory on those screens
Last edited by sn26567 on 24 Sep 2014, 23:04, edited 1 time in total.
Reason: corrected BBCode
Top

Thanks for the comments

My photos have been "chopped" so some parts are missing - I think I'll have to make the next lot smaller to avoid the problem. I was pleased with the Aurigny, I had never seen one so close.

I like to see Airshow to complement my journey - nice to know where you are when flying over cities and nice countryside. I remember OO-SSK had Airshow in the days of SN Brussels.
Sabena and Sobelair - gone but never forgotten.
Louise
Top

Turning off the runway. Not sure which runway, maybe 25L?

I'd say landing on RWY 25L indeed seeing the B Pier in the background (pic with spoilers deployed).
Then vacating via Charlie 4, crossing RWY 01 with the last pair of touchdown zone markings visible as well as the last row of 4 TDZ lights, straight onto Echo 3. Then Inner 9 and 8, Sierra and parking on Apron 2 North.
Tougher is which stand?
210? What do you think?

Thanks for the runway info, I thought 25L but I'm not familiar with other runways at BRU. We certainly approached in the right direction for 25L. I took the pic of the aircraft turning off the runway as I've not normally seen it from that side - the right side - of the aircraft.
Sabena and Sobelair - gone but never forgotten.
Louise
Top

Nice report from our national airline, glad you enjoyed the flight.
Visit my flights on: http://www.quixoticguide.com
Top

Tougher is which stand?
210? What do you think?

Tougher is which stand?
210? What do you think?

Think you're right Kapitein.
For sure I was wrong as it would not be possible see three lighting poles from 210 from that angle.

Also the clearer pavement below the wingtip fence is where the IRDL used to be, now replaced by 210 and 214 with the two new boarding bridges.
So that brings us to 230 indeed.

You spotted the village of Betekom, right next to the (little) city of Aarschot where you must have passed over my head!

Once again, thanks for commenting

It's great to know one place we passed over.

My first flight on Brussels Airlines was very pleasant, I hope I get chance to fly with them again next year.
Sabena and Sobelair - gone but never forgotten.
Louise
Top
Post Reply
16 posts • Page 1 of 1