The German airline operates 6 Airbus A320 family aircraft for its technical subsidiary Condor but the latter is clearly suffering from the recent outbreak of the coronavirus, said Ralf Nagel, CEO of Thomas Cook Aviation. “Condor cancelled the contracts that were valid until 31 December 2021“, said Nagel.

The airline was established in October 2017 as Air Berlin Aviation GmbH and was taken over by Thomas Cook Group in order to facilitate rapid growth in Germany in the aftermath of the Air Berlin insolvency. On 31 January 2018 the airline received its Air Operator’s Certificate (AOC). The company was renamed to Thomas Cook Aviation on 22 November 2018.

In December 2019, the airline received its first Airbus A320, a former aircraft of now-defunct sister airline Thomas Cook Airlines Balearics. In the same month, Condor announced that after separation from defunct Thomas Cook Group, it would update the livery of its aircraft by removing all references to its former parent company and replace the heart-shaped logo by its own company logo. The planned redesign also included the aircraft of Thomas Cook Aviation. 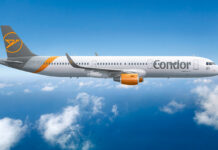